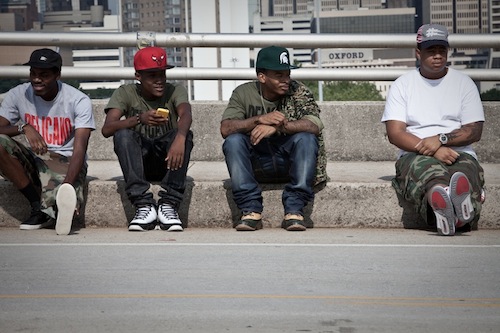 There are two definite rules to winning: Your product must be awesome and product placement is everything. After XXL revealed their July/August cover to hip-hop heads, all eyes were on Wayne... Well, Wayne's FLI PELICAN t-shirt. The gray, long-sleeved tee with the phrase "NO SUCKA S##T" etched across it was a win for the Atlanta-based streety luxury clothing brand that preaches living a 'Pelicano lifestyle.'

The four-year-old collection started from creative restlessness in 26-year-old Detroit, Michigan native Nino Corleone who designs for the line, with the help of blog manager Gregorio il, artist Arezzo Gatti and brand manager Dreq Capone. Their goal is to take street wear and blend it with luxury garments and materials, and if you're a fly individual, you definitely know about these four Pelicans. Nino talked to VIBE about his YMCMB collaborations and what's in store for the line now that has all eyes are on them. -Niki McGloster


VIBE: We've all seen the XXL cover with Lil Wayne rockin' a FLI PELICAN shirt, tell me how that collaboration happened.
NINO: A few months ago, I went down to Miami to meet with [YMCMB]. I kicked It with them and they liked the clothes genuinely; it was nothing I had to push on them or anything. They just picked the clothes up and wore it.. That’s one thing that I’ve been trying to stress to all of these artists that I have been doing work with. Doing something like that alone, speaks more than me being on video sets for hours trying to get people to wear clothes, so we good!

Nice. So they love your work, but what was the dialogue that you and Lil Wayne had? How did you get him to rock your shirt on the cover?
I got a funny story about that one. First time I went to Miami, we went to go meet homie at Hit Factory, and I was having a disagreement with my business partner in the cab on the way there going to Opa-locka. The whole time he is having the same conversation with me like, 'Ay, bro, you didn’t bring no smalls?' I was like, 'No, I only got mediums.' He was like, “Man, we need those smalls.” I told him to relax and so we get there, we passing out the shirts to everybody on the staff, and I hear [Lil Wayne] saying, 'They ain’t bring my size. Aw man.' So I actually had to double back and [make the trip to Opa-locka] again. [Laughs] we made some more specialty pieces for them: Some one-on-one stuff, some t-shirts, jackets, we did some YMCMB printed shirts and we did some sweatshirts with patches of mink, so everything worked out.

So wait, you guys did their official YMCMB shirts?
Well actually what happened is they ended up licensing to someone else. Their company came in and bought in on it. That was early that we had come in and done all that stuff. Now, they sold it off to some people.

Okay. So did you know he was going to wear the shirt for the cover, or did you just see the magazine cover online?
I got a phone call. The day that the call came, I was at Krystal’s in the drive-thru, and Lil Chuckee called me, like, 'Ya’ll doing it big now, huh?' I’m like, 'What you talking bout, bruh?' He was like, 'Ya’ll out here on covers!' I’m trying to figure out where it’s at because I haven’t seen it yet. He was trying to tell me what it looked like, but I seen it. I mean ever since then we’ve been getting great reception, it’s been so grand because we’ve been building the company for so long. Wayne was a great placement, but we been working with so many artists since then and not even artists, athletes as well. Just to get it to this point that is one of my largest accomplishments to this date and that is just breathtaking.

I’m glad that you began to speak about that because I know FLI PELICAN is getting more respect and love now since the cover, but you've been working with artists and celebs for awhile. Can you drop some names and any stories of people you’ve been working with?
Yeah definitely, Travis Porter. First and foremost, those are my good friends before anything.  We’ve put clothes of Darrelle Revis of the New York Jets, Teyana Taylor, Terrence J, Big Sean, Waka Flocka. I mean so many people.

Cardi B is making her way back to the big screen. The Bronx native officially landed her first leading role in the upcoming Paramount comedy, Assisted Living.

According to Variety, Cardi will play a small time crook struggling to find a hiding place after her latest heist fails. Her character, “Amber,” disguises herself as an elderly woman and hides out at her grandmother's nursing home. The film is described as a “raucous comedy” similar to Mrs. Doubtfire and Sister Act.

Paramount acquired the rights to Assisted Living in 2019. The film’s script was penned by This Is Us writer, Kay Oyegun.

Cardi, 28, made her film debut in the 2019 celeb-heavy stripper flick, Hustlers. The “WAP” rapper appears to have hinted at her Assisted Living role in a recent interview with Billboard where she dished on filming scenes for Fast & Furious 9.

“After ‘Hustlers’ I filmed a little bit for 'Fast & Furious' so I felt like ‘I’m ready for this,’ I knew what to expect,” she explained. “But the characters were a little different so I was like ‘Oh wow, I’m going to need more acting classes.’ I’m planning on doing a movie this year and I’m going to be the lead role so I’m like ‘I need to execute this flawlessly.’”

Besides film, Cardi was a judge on the Netflix completion show, Rhythm & Flow, and landed her own Facebook Watch series, Cardi Tries.

Netflix gave a preview of the streaming giant's upcoming films on Tuesday (Jan. 12). Among them, the highly anticipated western, The Harder They Fall.

The Harder They Fall follows the fictional character, Nat Love (Majors), as he seeks revenge on the man who murdered his parents. Besides signing on as a producer, Hov also created original music for the film.

The Covid-19 pandemic delayed filming, which began in March of last year in Santa Fe, New Mexico. Filming resumed in September but was paused again after one of the actors tested positive for coronavirus.

“What I love about movies is that they can make you feel every emotion,” King says in the Netflix teaser.

“And show you something you’ve never seen before,” adds Majors while clips from their film plays on the screen.

The Harder They Fall is one of 27 films headed to Netflix. See more in the video below.

2021 = a new movie EVERY WEEK on Netflix. Here's a sneak peek at 27 of the biggest, brightest, fastest, funniest, feel-good, feel-everything films and stars coming to Netflix this year pic.twitter.com/iCr1ZPrc7W

Insecure will return this year for a fifth and final season, Issa Rae revealed on Wednesday (Jan. 13). In a statement to Deadline, Rae and executive producer Prentice Penny showed gratitude to HBO and fans of the show.

“Prentice and I are so grateful that HBO believed in our show from the beginning and kept the faith in us to see our vision through the end,” said Rae.“We always planned to tell this story through five seasons, but we couldn’t have made it this far without the tremendous support of our audience. I feel blessed beyond measure to bring our characters’ stories to an end, on-screen at least.”

Based off the 36-year-old’s popular Awkward Black Girl YouTube series, lnsecure was created by Rae and Larry Wilmore. The series premiered on HBO in 2016.

Season five will reportedly begin filming later this month with Rae, Yvonne Orji, Jay Ellis, Natasha Rothwell and Amanda Seales all expected to return. The previous season ended with Rae’s character at yet another crossroads with her on-again-off-again boyfriend, Lawrence (played by Ellis).