VIBE.COM catches up with London's 'King Of Trap', Blade Brown... 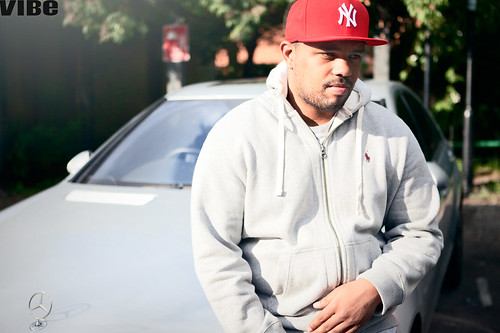 Blade Brown: I got into music from a very young age. I think it was more or less because of what my dad used to play in the house when I was growing up. He would play a lot of rap music, so I used to hear a lot of the old school artists, such as NWA and Ice Cube, just a lot of 90s rap. That’s what really got me into rap when I was young. He also used to play a lot of reggae, that was a big influence for me, too. I was probably about 17 when I knew that music was something that I wanted get into on a serious level. I’m 26 at the moment, so it’s been a little while! I made my first mixtape, Nothing Long, in 2004 and when I started to get some good feedback, that’s when I started taking it seriously.

I used to do a bit of grime as well! Actually, it wasn’t even called grime back then, it was garage. When it made the transition from garage to grime, it kind of got lost somewhere. Everyone would jump on it and just start talking nonsense! Present-day grime, I don’t know. Again, there’s not really a scene, because there used to be pirate radio back in the day and that doesn’t really exist anymore. The grime that I used to know doesn’t really exist anymore. I think grime, where it’s more of a younger thing now, needs to be restructured. I would say, in recent times, people like Skepta and a few others have been doing their thing. Skepta’s Community Payback mixtape was the perfect balance between grime and rap. I would play it to people in my car – who have never really listened to grime – and they’d be like, 'Rah! This is kinda sick!'

UK rap music has a big buzz around it at the moment. You’ve obviously got people like Giggs and K Koke, whose street following is undeniable – it’s even bigger than some of the people who are signed! I think there is still a lot to do, but it’s gradually getting there. Obviously, if a label came to me with a deal and said that I had to change the person that I am, I wouldn’t take the deal. But if you listen to my mixtape, I have actually made songs that crossover. There are different parts to your life, you can’t just talk about the same thing all the time. You can talk about girls, you can talk about when you’re down, and you can talk about your family. If you can’t tap into those other parts of your life, then there’s no way that you could become a successful artist. There are different ways that you can do it, it doesn’t have to be a stupid commercial song.

I know there are a lot of people out there who think that my lyrics glamorise the street lifestyle, but it doesn’t. Just make a judgement on my music after you’ve listened to it properly! I talk about different sides of life. Another thing is that it’s not always going to be for everyone, that’s just how it goes in music. When I talk about money and things like that, personally, I find it motivating. If that doesn’t motivate you, then me and you are clearly different people. There’s a lot of intelligence in the lyrics and wordplay in my music, you have to read between the lines.

I'd say that Bags & Boxes is probably the best mixtape that I've made so far. It took three years of living and a lot of people getting on to me about making another mixtape before I actually made it. The anticipation was high! When it dropped, it went crazy and people still talk about it to this day. Even though I’ve done a mixtape after that, people still love that one. Now that I’ve shown that I can do the mixtape thing, when I make my album, the bar has to be raised. I enjoy making mixtapes, but I think it’s time that I take the big step and do the whole album thing. I feel that I’ve got the right producers around me right now and I'll also get to do things that I haven't done on mixtapes before, so I’m actually looking forward to making it.

When it comes to having competition, I just think that everyone has their own space. I think we need to stop watching what others are doing too much and focus on your music and your career. It’s healthy to have a little look to see what everyone else is doing, but I’m not really a rapper that listens to everything that everyone’s doing, comparing myself and saying, ‘I’m better than them.’ All of that doesn’t really matter. There are a lot of younger rappers coming up who are very good and I know some of the older lot look down on them, but I personally think it’s healthy and it’s good that they’re busting through. But I’m just focused on my movements right now. I’ve got my mixtape, Financial Times, out now and it’s doing really well. I might release a free mixtape soon as well, so I’m going to get that out of the way and then start thinking about my debut album. Blade Brown, remember the name…

-As told to Joseph 'JP' Patterson
Photography: Liam Ricketts
In This Story:

The 55-year-old music mogul will remain under 24-hour care for the next few weeks as medical professionals continue to monitor his progress. Doctors are still unclear on what caused the aneurysm.

Dre’s hospital release comes days after new details were revealed in his divorce from estranged wife, Nicole Young. According to court documents publicized this week, Nicole accuses Dre, birth name Andre Young, of putting a gun to her head in 2000 and 2001. She also details other alleged abuse incidents in 1995 (before they were married) and in 2016, when he allegedly punched her in the face and kicked down her door.

In addition to demanding that Dre cover her legal fees, Nicole wants the court to take the abuse allegations into account when “awarding support and fees.” Dre has already agreed to pay $500,000 of Nicole’s legal bills and $2 million in temporary spousal support.

Cardi B is making her way back to the big screen. The Bronx native officially landed her first leading role in the upcoming Paramount comedy, Assisted Living.

According to Variety, Cardi will play a small time crook struggling to find a hiding place after her latest heist fails. Her character, “Amber,” disguises herself as an elderly woman and hides out at her grandmother's nursing home. The film is described as a “raucous comedy” similar to Mrs. Doubtfire and Sister Act.

Paramount acquired the rights to Assisted Living in 2019. The film’s script was penned by This Is Us writer, Kay Oyegun.

Cardi, 28, made her film debut in the 2019 celeb-heavy stripper flick, Hustlers. The “WAP” rapper appears to have hinted at her Assisted Living role in a recent interview with Billboard where she dished on filming scenes for Fast & Furious 9.

“After ‘Hustlers’ I filmed a little bit for 'Fast & Furious' so I felt like ‘I’m ready for this,’ I knew what to expect,” she explained. “But the characters were a little different so I was like ‘Oh wow, I’m going to need more acting classes.’ I’m planning on doing a movie this year and I’m going to be the lead role so I’m like ‘I need to execute this flawlessly.’”

Besides film, Cardi was a judge on the Netflix completion show, Rhythm & Flow, and landed her own Facebook Watch series, Cardi Tries.

Wendy Williams revealed that she was date raped by  ‘80s R&B singer, Sherrick, early in her radio career. The talk show host shared the story with reporters while promoting her Lifetime biopic Wendy Williams: The Movie on Tuesday (Jan. 12).

“He mesmerized me with his twinkling eyes,” she recalled. “He flipped the interview around to where he was interviewing me — I was just gaga over this man and he asked me to go to an album release party with him that night.

“Before the party, I was date raped by him,” said Williams.

Sherrick, born Lamotte Smith, was a member of the group Kagny, whose song is featured on The Last Dragon soundtrack. He signed to Warner Bros. Records in 1987 and scored a marginal hit with the single “Just Call” off his debut self-titled album. Sherrick struggled with sobriety but declared himself “drug-free” before dying of unknown causes in 1999.

Williams says that she was raped in Sherrick’s Washington D.C. hotel room and it, unfortunately, wasn’t her first time being sexually assaulted. The New Jersey native had been date raped in college. “Those types of things happen to girls all the time and they’ve been happening a lot, to a lot of our mothers, grandmothers, great-grandmothers, and their great-great-grandmothers too.”

From the sounds of it, Sherrick's widow doesn't exactly believe Williams' story. She not only questioned Williams' account but wondered why she waited so long to go public, and why she didn't call police at the time of the incident.

“As I will never minimize or dismiss the horrid actions of sexual assault, I am saddened that Ms. Williams feels the need to publicly make these allegations when the man she is accusing is no longer on this earth to defend himself,” Lynne Conner Smith said in a statement to Page Six.  “Our family does not know Ms. Williams and are not aware of any relationship or encounter they may have had.”

The sexual assault will be chronicled in the film, as well as other details from Williams' life -- like her rise to talk show fame, her battle with drug addiction, and marriage to ex-husband Kevin Hunter.

Wendy Williams: The Movie premieres on Lifetime on Jan. 30.