If this move made by Hollywood currently baffles you, don't worry, we aren't sure what to make of this move either.

Yesterday (8/26), the wildly popular actor Vin Diesel was honored in a ceremony on the famed Hollywood Boulevard amidst friends, family and fans. The 46-year-old star, who first burst on the radar in 1999's The Iron Giant, became the 2,504th star to be inducted onto the Walk of Fame.

Joined by his Fast and Furious co-stars Michelle Rodriguez and Jordana Brewster, the former was quoted giving praise to her racing co-star, saying, "I love Vin Diesel. On top of just being one of my best friends... this man dares to dream when people forget to dream. This guy, he looks at the impossible and says, 'When do we start?'"

Take a look at his star on the Walk of Fame below: 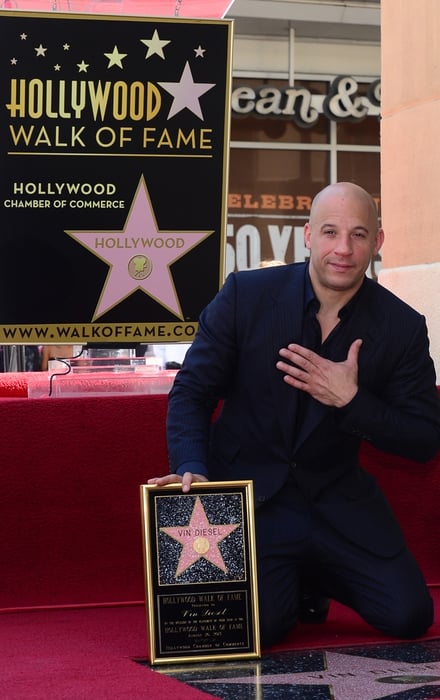 Another seemingly "impossible" journey is his inclusion in the space age Marvel adventure, Guardians of the Galaxy, directed by James Gunn. The voice actor will play the role of Groot, a tree-like alien who joins a team of aliens to fight against a cosmic enemy. In addition to that, fans can see the badass in the upcoming films The Last Witch Hunter and Fast and Furious 7, which just added Tony Jaa in an unlisted role.

If you cannot wait to feast your eyes on the New York City actor, Diesel will next be seen in Riddick, alongside Keri Hilson, which will be the third installment of the popular The Chronicles of Riddick sci-fi franchise. You can see the new trailer below.

Riddick will be landing in theaters next week on September 4th.

The Emmy-nominated Red Table Talk, hosted by Jada Pinkett Smith, her daughter Willow Smith and mother, Adrienne Banfield Norris, has inked a three-year deal with Facebook Watch that extends through 2022.

In addition to a new contract, Westbrook Studios (owned by Pinkett Smith and Will Smith) is expanding the Red Table Talk brand with a spinoff series starring Gloria Estefan.

Red Table Talk: The Estefans, will be produced by Pinkett-Smith, Westbrook Studios and Estefan, with Ellen Rakieten and Miguel Melendez serving as executive producers. The series features the music icon along with her daughter and rising musician, Emily Estefan, and her niece Emmy winner, Lili Estefan. The new show will be based in Miami, where Estefan lives, and will showcase three generations of women having candid conversations about timely topics, social and personal issues with family, in addition to celebrity guests and experts.

“I’m incredibly proud of ‘Red Table Talk,’ and thrilled to build upon this franchise with my family and with Gloria, Emily and Lili,” Pinkett Smith said in a statement. “‘Red Table Talk’ has created a space to have open, honest and healing conversations around social and topical issues, and what’s most powerful for me is hearing people’s stories and engaging with our fans in such a tangible way on the Facebook Watch platform.  I’m excited to see the Estefans put their spin on the franchise and take it to new places.”

Estefan added that she’s “incredibly excited” to carry on the “'Red Table Talk' torch” with her family.

“Jada and I have spoken about this a lot and feel my daughter, niece and I can tackle issues important to us and our fans with a new and fresh voice,” said Estefan. “Jada has done this incredibly and continues to do with her family in their candid, intimate, and groundbreaking conversations at the iconic Red Table.”

Trailer: 20 Years After His Death, Houston Legend DJ Screw's Life Coming To A Network Near You

There are many stories that define the emergence of styles within the world of hip-hop, yet one of the most influential tales will be told for all to be inspired by, and that story is the life of Houston's legendary Robert Earl Davis, Jr. aka DJ Screw. Known now as the innovator of the "chopped and screwed" style birthed in the 90s of slowing down the speed of hip-hop jams to that of a crawl, where the lyrics drawl out and the beats stretch and your head has no choice but to bob.

The new episodic series, titled All Screwed Up, is directed by producer/filmmaker Isaac "Chill" Yowman and is based on the life of DJ Screw and the happenings of his Screwed Up Click label. The trailer shows the many dramatic points in the young Screw's journey to recognition. From crosstown rivals to police harassment, to building a music empire around talented gangstas, the situations he pushed through created the sound that proved to live on beyond his life.

2020 makes 20 years since Screw passed on from what was labeled a codeine overdose in his studio. There are still street stories about what happened to Screw and all the possibilities, but what is for sure is this man's contributions to hip-hop culture can't be denied. His handprint is all over the slowed down and chopped up productions that permeate all of today's top-charting artists from Drake, to Kendrick, to Future to Travis Scott to name a few.

Watch the trailer above and be on the lookout for the network that will carry this sure-fire hit of a series. In the meantime, check out one of Screw's original tapes with his Screwed Up Click below.

‘Bad Boys 4’ Is Reportedly In The Works

Martin Lawrence and Will Smith are reportedly returning for another installment of the Bad Boys franchise. According to The Hollywood Reporter, Bad Boy’s 4 is already in the works.

Bad Boys for Life script writer Chris Bremner will return for Bad Boy’s 4, the outlet reported on Friday (Jan. 17). No word yet on when the film will be released, but fans can expect a much shorter wait than the 17-year gap between Bad Boy’s 2 and Bad Boys for Life. The film was delayed due to script issues.

“I just didn’t want to wreck the franchise,” Smith told Elliott Wilson during a CRWN interview last month. Lawrence echoed his words in an interview with GQ magazine.

“The script wasn’t right. And Will, to his credit, refused to do the movie until the script was right. It wouldn’t have been a good movie. We dint’ want that. We wanted to do a sequel where people would go, ‘Oh man, that’s what I’m talking about. It just get better.’”

Bad Boy’s for Life opened on Friday and is expected to bring in more than $67 million in its debut weekend.