Guess who's taking their talents to Los Angeles? Evelyn Lozada's recent engagement announcement has gossip mags musing if the reality TV veteran will move on to Real Baseball Wives of Los Angeles soon.

It seems like the most talked about celebreality personality is switching sports allegiances, again, and getting married to boot. Lozada, who is seven months pregnant with Crawford's child, is battling allegations that her soon-to-be hubby is a bit of a philanderer. Quickly coming off a Las Vegas-esque marriage to former NFL star Chad (Ochocinco) Johnson, the pair was originally planning their own VH1 series titled, Ev & Chad, but only a month into their marriage Johnson assaulted his new bridge — reportedly over a receipt for condoms she found in the back of his car.

After filing for divorce shortly after the August 2012 incident, TMZ reports that Lozada had been dating her new All-Star beau in secret for nearly a year.

Lozada's past relationships with sports involved a 10-year-relationship with now-retired NBA forward Antoine Walker, the aforementioned Ochocinco (NFL), and she also has a daughter, 20-year-old Shaneice Lozada, from a previous relationship.

The Brooklyn, New York City born reality TV character broke the news on her Instagram account, posting a picture of a ginormous 14.5 carat diamond engagement ring on her finger with the caption, "Yes!" You can see the glacier-sized rock for yourself below: 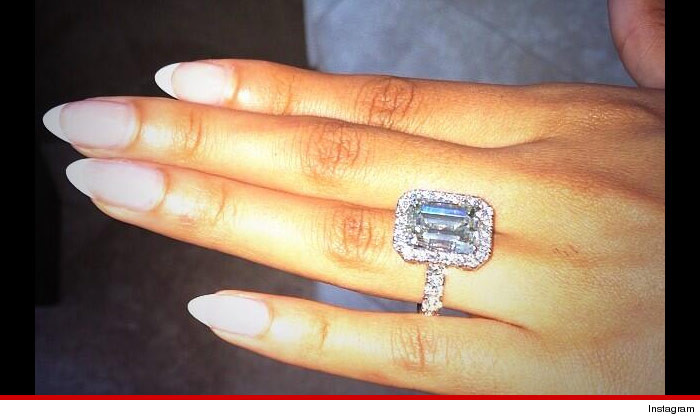 Crawford pulled out all of the stops to propose marriage to Lozada: designed by Jason of Beverly Hills, the ring is valued at $1.4 million. If you think that the young MLB all-star cannot afford it, the 32-year-old is currently rounding the third year of a seven-year $142 million dollar contract he originally signed with the Boston Red Sox.

Chappelle’s Show is no longer streaming on Netflix, at the request of Dave Chappelle. The comedian reached out to the company to ask them to remove the series, for which he received no residuals, and they quickly complied.

On Tuesday (Nov. 24), Chappelle’s posted an Instagram video from a recent stand-up show, called Unforgiven, where he further explained his reasoning for not wanting the Viacom/CBS-owned show to stream on Netflix. “[ViacomCBS] didn’t have to pay me because I signed the contract,” he explained of the sketch comedy show. “But is that right? I found out that these people were streaming my work and they never had to ask me or they never have to tell me. Perfectly legal ‘cause I signed the contract. But is that right? I didn’t think so either.

“That’s why I like working for Netflix,” he continued. “I like working for Netflix because when all those bad things happened to me, that company didn’t even exist. And when I found out they were streaming Chappelle’s Show, I was furious. How could they not– how could they not know? So you know what I did? I called them and I told them that this makes me feel bad. And you want to know what they did? They agreed that they would take it off their platform just so I could feel better.”

Episodes of Chapelle's Show had been streaming on Netflix for about a month. While the showw has been wiped from the streaming outlet, episodes remain on Comedy Central, CBS All Access, and HBO Max.

Months after its debut, ABC's For Life has returned for a new season. Based on the true story of Isaac Wright Jr., a former-inmate-turned-lawyer, the drama series' protagonist, Aaron Wallace (Nicholas Pinnock), fights for his freedom and safety in and out of the courtroom while fighting for that of his fellow inmates. As Wallace inches closer to finding substantial evidence to exonerate himself, he reconnects with his ex-wife Marie (Joy Bryant) and pregnant teenage daughter Jasmine (Tyla Harris).

"When I met with Issac, I almost couldn't believe what he was saying to me. He went to jail, became a prison rep, came back created a case law through other people's cases, and worked his way out of jail?" said Curtis "50" Cent" Jackson in a recent interview with VIBE correspondent Jazzie Belle. "You know more people that saw things not going well [in prison] and said I'll take a bad situation before I take the worst situation and cop-out because they know the system will just wash them up and that will be the end of it."

The first season of For Life essentially covers the first 9 years of Wright's experience while in jail. This season, topics like Black Lives Matter and social justice are addressed and Wallace finally reenters society. "There are 5 different Aarons I'm playing," shared British actor Nicholas Pinnock. "One is Aaron who is the prison rep. One is Aaron who is the father and husband to Marie and Jas(mine). One is Aaron with the prison warden and his relationship with her. Another one is Aaron just as an ordinary prisoner. And then you have Aaron the lawyer...and then in Season 2, we have a sixth layer. There's Aaron on the outside."

An unspoken source of strength lies in Marie who has supported and served as a "ride or die" figure in the first season. When asked about addressing those who don't agree with her prior decision to move on to Wallace's friend, Bryant pointed out her character's humanness. "Marie had to make some hard choices when Aaron was sent away. They may not be things that people agree with. 'Oh, she's with his best friend' or whatever, but she was left holding the bag, literally," she pointed out. "Things aren't always so black and white. People have to make decisions based on where they are and what they feel they need to do at the time and everyone can have whatever opinion they want."

Filming on the highly anticipated sequel to Black Panther is set to begin next summer. Marvel Studios will start shooting the Ryan Coogler-directed sequel in July 2021, according to The Hollywood Reporter.

“The series are the priority, “ a source told THR of Marvel’s film strategy going into next year. “Ramping them up takes a lot of focus. The movie machinery is well established.”

The shoot will last at least six months. Princess Shuri, the character played by Letitia Wright, who plays King T’Challa's sister Princess Shuri, could take on an expanded role given the death of Chadwick Boseman.

Narcos: Mexico actor Tenoch Huerta will reportedly join the cast, while Lupita Nyong’o, Angela Bassett and Windsor Duke are also expected to return for the second installment of the Marvel film.

In September, Black Panther’s executive producer Victoria Alonso denied rumors that Boseman would appear in the film via CGI technology. “There's only one Chadwick, and he's not with us,” Alonso said. “Our king, unfortunately, has died in real life, not just in fiction, and we are taking a little time to see how we return to the story and what we do to honor this chapter of what has happened to us that was so unexpected, so painful, so terrible, in reality.”

Boseman, 43, passed away from colon cancer in August.