The moment I knew Burna Boy had that star factor was the moment I heard a track that wasn’t even his. It was, rather, his featured vocals on DJ Spinall’s first, March 2014 single “Gba Gbe E.” Produced by Spellz, the afrofusion artist rides the wave of the uptempo, high energy instrumental, where he gifts our ears with a praise song bigging up veteran Nigerian reggae (galala) artist, Daddy Showkey. The tone and texture in his voice are distinct while he delivers his lyrics effortlessly. I would soon realize that the African Giant is serious about his craft.

Five years later, Burna Boy, born Damini Ogulu, released his fourth studio album and landed his first Grammy nomination for Best World Music Album last week. For those who’ve been following the 28-year-old’s career from its inception, this nod comes as no surprise. If anything, it’s about time.

A native of Port Harcourt, Nigeria and the grandson of Benson Idonije—Fela Kuti’s former manager—it seems that legacy and connection points to Burna’s destiny of being a rockstar for the people. He’s steadfast in paying homage to the afrobeat legend seamlessly throughout his repertoire, even pre-African Giant.

He first made a statement with his debut studio album, L.I.F.E (Leaving an Impact for Eternity), which dropped in 2013 and peaked at No.7 on Billboard‘s Reggae Albums chart. That LP holds his hits “Like to Party,” “Tonight,” and “Yawa Dey.” His 2015 sophomore album, On A Spaceship, introduced us to “Soke,” a reflective, critical track on the current state of Nigeria that ironically was (and still is) in heavy rotation at African parties. He also took this project as an opportunity to address the controversies that surrounded him and the “bad boy” image critics claimed he emanated. Burna’s 2016 EP Redemption took it a step further, giving us another poignant, introspective single with “Pree Me.” Then the shift happened in his favor.

Outside, Burna Boy’s third studio album, which also peaked on the same reggae chart at No. 3 in 2018, was his afrofusion manifesto. It was his mined diamond that showed us his range. Tapping the likes of Lily Allen, J Hus and Mabel as features, sampling Fabolous and Tamia’s “So Into You” in “Giddem,” as well as giving us a replacement Nigerian national anthem with “Ye,” Burna Boy exists on a genre-less plane. Intentionally pulling from a plethora of sounds on the album including afrobeat, pop, R&B, dancehall, grime—he had something for everyone in this project and it oozed with replay value. His most recent project African Giant was, in short, a mic drop and an extension of his brand’s global takeover; it solidified what would be his crossover moment.

Over the past decade, African pop acts from across the continent, and Nigeria especially, have been working above and beyond to widen their reach, step on the world’s stage and aspire for mainstream nods like a Grammy nomination. Attaining and reaching towards those goals involves the inevitable crossover. Although Burna Boy has said he’s continuing to be himself, to be an ambassador of Africa and not concern himself with the typical workings of a crossover, it’s clear that this Grammy nod is a result of a successful one.

Let’s take a closer look at the three factors of Burna Boy’s success and what rising African pop acts can learn from his journey to-date.

It pays for an artist to act on being their own brand and use moments of visibility to their advantage. Being meticulous with the details is key. For example, in celebration of selling out the O2 Brixton Academy in London, Burna Boy held a pop-up event and sold limited-edition boxes of Space Puffs cereal and more custom merch the day before the show in October 2018. Just that week, he was Spotify’s Afro Hub Takeover Artist and was also named Youtube’s Artist on the Rise. The lucky ones who were able to snag an item from that pop-up have something tangible that memorializes these markers of the come-up in Burna’s career.

Burna Boy also made his way through the festival circuit in full-force this year, starting with Coachella. There was quite a bit of buzz around the announcement at the top of this year, where he felt a way that he was billed in small font on the line-up. “Coachella I really appreciate you. But I don’t appreciate the way my name is written so small in your bill,” he said in a deleted Instagram Story. “I am an AFRICAN GIANT and will not be reduced to whatever that tiny writing means. Fix tings quick please.” Music editors and tastemakers soon received a revised Coachella poster signed by Burna Boy, with just himself, in large and small fonts, as the billed artist. This was yet another clever way to maximize a moment to the artist’s advantage that would otherwise put a dent in their reputation.

Burna then dropped six singles accompanied by stunning music videos, half of which were helmed by director to watch Meji Alabi, leading up to the release of his fourth studio album, African Giant, this past July. If this project did two things, it first silenced the naysayers. Second, it showed he’s at the level where the respect he expects from mainstream players in the industry—and the bravado that comes with it—is warranted. The receipts are all there just in the music alone. 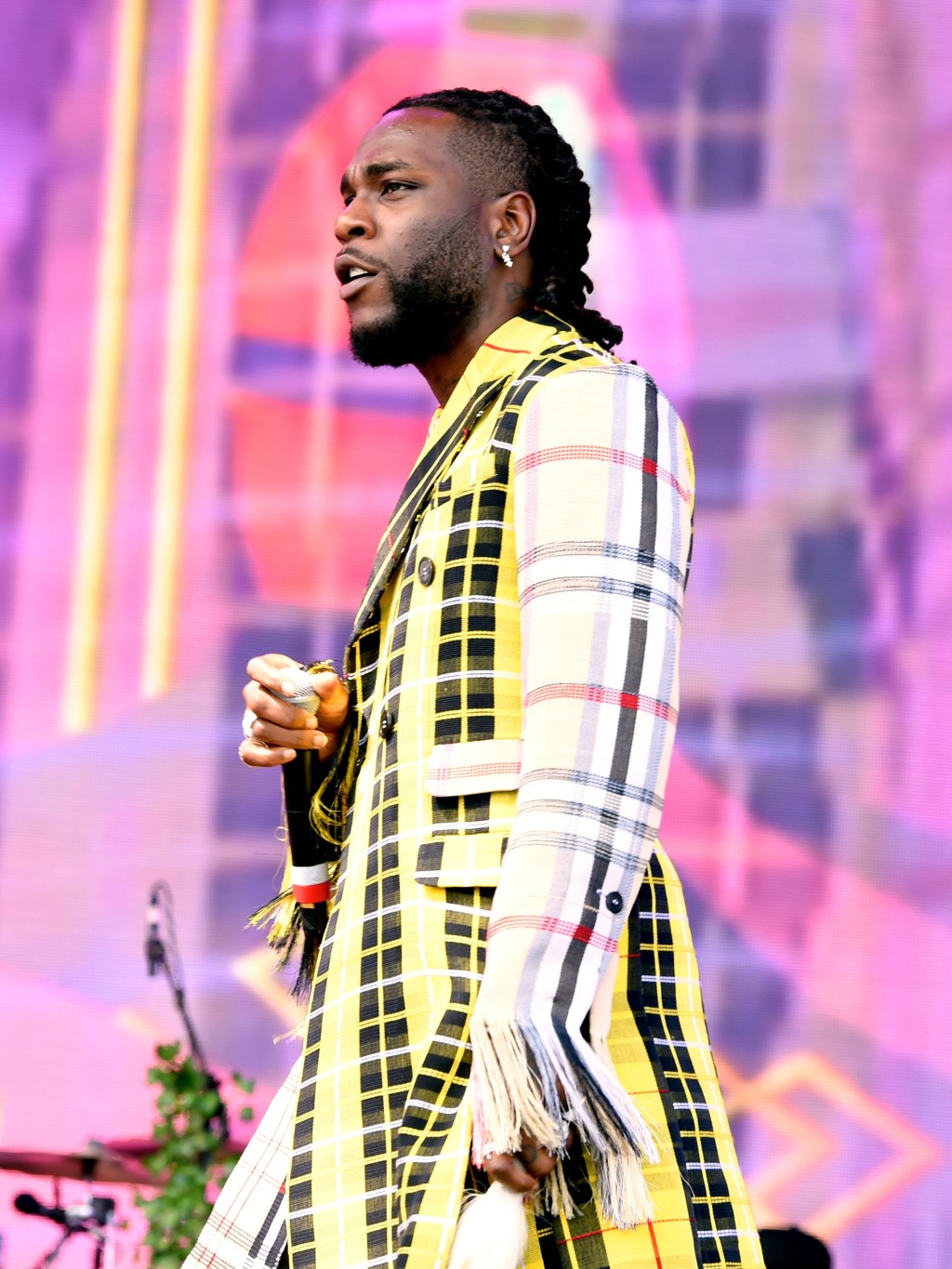 In and around his latest body of work, Burna Boy has always been intentional about who he collaborates with. It’s a reflection of the diverse music genres he consumes as well as an indicator of range—including working with Fall Out Boy, L.A.-based electronic duo DJDS on their joint EP Steel & Copper, Future, YG, Jorja Smith and more.

He’s also the epitome of one who respects the greats who came before him. This can be seen with his eventual collaboration with Beninese singer-songwriter Angelique Kidjo. Even before sampling her in “Anybody” (word to Sample Chief), Burna tapped Kidjo’s “Wombo Lombo” in a track with the same name in 2013. Joining Burna alongside Damian Marley on “Different,” the track closes with Kidjo—giving her the breathing room to envelop our ears with her piercing vocals that becomes a transitional interlude to “Gbona.” With African Giant, he shows us these greats also approve of his artistry, which is frankly the one co-sign that an artist vies for, as it reassures them that they’re doing it right.

Burna Boy is fully aware of who he is and his purpose as an artist. We’ve yet to see him step outside of himself, especially through his music. What’s great about Outside and African Giant is that both projects are the ideal entry points for new fans who aren’t familiar with his take on afrobeats. However, Burna has kept that same versatile energy from the beginning. He also has maintained Fela’s message and music as his throughline, delivering similar sentiments to a whole new generation.
Burna’s also about his business. Reflecting on the moments I’ve shared the same space as him, where he was being taped performing his singles from African Giant for different media platforms, he enters, politely greets everyone, does his brief set in one take and leaves to his next engagement. He truly comes alive when he’s on stage engaging with his fans—you can tell it’s his true happy place and his delivery show after show.

His fervent authenticity has led him to more opportunities for him to shine, from him being the only guest artist with their own track on Beyoncé’s The Lion King: The Gift, to landing an original on the soundtrack for Queen & Slim an impending blockbuster on black love.

The undeniable thread that ties these three factors together is consistency. Artists who give the people excellence—with a consistent message on every track, in every music video, and at every live show—will reap the fruits of a successful crossover. It would also be remiss of me not to mention the foundation an artist needs to execute such: a solid team who gets the vision and has the best interest of the artist in mind—a team that can convince and show their artist that following the formula will be worthwhile. From his manager mother (who’s also a living icon) Bose Ogulu, to his sister and stylist Ronami Ogulu, to his core collaborators at Atlantic Records, Burna’s team is rock solid. The rollouts for his projects released over the past three years have been deliberate and executed so well that pop artists from the continent have already taken notes and applied what has worked to their strategy.

Burna Boy has achieved much leading up to this Grammy nod from the Recording Academy. Whether he takes home a gold gramophone or not in 2020, he’ll walk away a winner all the same.

Antoinette Isama is a dynamic writer, editor and media multihyphenate with expertise in the intersection of African youth culture, arts, and the diaspora.