Cardi B may hail from the Bronx, but she’s far from your typical ’round-the-way girl. She’s been able to travel the world while entertaining millions of fans with her music, acting, and gregarious personality. Along those travels, the rap star has also been exposed to cultures and various activities that have forced her to step outside of her comfort zone. Those experiences have served as the inspiration behind her new web series, Cardi Tries, where she tries everything from new hobbies to fresh cuisines. Produced by Jesse Collins Entertainment, with Cardi B serving as an executive producer, Cardi Tries, includes appearances from her celebrity pals and trusty glam squad as she partakes in various adventures.

In the latest and fifth episode, the 28-year-old rapstress links up with actress and comedian Amanda Seales, who helps introduce Cardi to the world of rhythmic gymnastics. From working with equipment like the club, ball, and ribbons, to performing a special routine alongside Seales in front of USA Rhythmic Gymnastics National Team member Nastaysa Generalova’s class, Cardi pulls out all of the stops to prove she’s up for any challenge.

“It teaches you discipline,” shares Seales in a statement. “The person I am today I can 100% say is because I was in gymnastics and it teaches you to keep getting up when you fall.”

“When I heard Cardi B and Amanda were coming to my class, I was beyond stoked, because I know Cardi B is a complete performer,” shares Generalova. “She knows how to get the audience going, and you need that in rhythmic gymnastics. And Amanda’s an ex-gymnast so I know she has tricks up her sleeve.”

Cardi Tries can be viewed on Watch Together via Messenger, Instagram, and Facebook Watch, which lets users watch music videos, TV shows, movies, and more in real-time. Viewers can also enjoy episodes of Cardi Tries with family and friends on Messenger and Instagram using the “Watch Together” feature.

VIBE had the opportunity to speak with the soon-to-be mother of two about her rhythmic gymnastics experience, introducing her 3-year-old daughter, Kulture, to the sport, and how Olympic gymnast Simone Biles inspires her. “Wild Side,” her latest collaborative single with R&B star Normani becomes a topic of discussion, too.

VIBE: You’ve partnered with Messenger and Instagram for your web series, Cardi Tries. How did the idea of having Amanda Seales on the show come about?

Cardi B: I don’t know if people know, but Amanda Seales…she grew up doing gymnastics. We just thought she was the best person to do this episode with. Plus, you know that the episode is gonna come around the time of the Olympics so we thought it would be really funny. Actually, on Tuesday, me and Offset, we’re gonna go see different gymnastics classes for Kulture. I’ve just been really interested in gymnastics and I’m glad that I had a little taste of what it is, you know? Gymnastics being fun, but it’s very, very strict, as well, almost like ballerinas. Like ballet (Laughs).

It was my first time meeting Amanda, but for some reason, I kind of felt like I know her. I don’t know if it’s because of social media, it was so smooth working with her. She just feeds off your energy and I don’t know. She’s just so meant for TV that I could do 100 episodes with her and it would breeze by.

You and Amanda try rhythmic gymnastics in this episode. What was the experience like for you? Were you nervous? Scared?

I wasn’t nervous. I was just like, “Ugh, I really don’t wanna do this because I know it was gonna be difficult” and it was very difficult, but I’m glad that I did it ’cause these are the types of things that I’m gonna put my daughter through. So that one day when she tells me how hard it is, I already know what she means. I mean, just [by] looking at gymnastics, you know it’s hard, but it’s like, “Hey, freak it!” (Laughs).

Being that you’re from the Bronx, where a lot of opportunities aren’t granted to all children, were you ever exposed to any other type of gymnastics?

Never, never. I was never exposed to gymnastics or nothing like that. None of the schools I went to had special activities programs or anything. When I went to high school, the only afterschool activities my school had was acting and plays and they only came around like once a year. And I couldn’t get on it because I wasn’t a B+ student, so just giving that opportunity to my child is so great for me. You know, gymnastics is not cheap, but one thing I learned from Amanda…actually, Amanda told me how gymnastics teaches you just how to [build] a routine. Just strictness, just responsibilities and those are the types of things I want my daughter to have.

Speaking of gymnastics, Simone Biles has really put a spotlight on the sport, particularly for women of color. Did you pull any inspiration from her during your own gymnastics experience for this episode?

Well, you know, I met Simone Biles I think about two years ago. I did this rodeo show in Texas and it’s crazy… well, not crazy, but when you look at a girl like Simone Biles and everything, you just think “Oh, my gosh.” It’s almost like she’s supernatural because she does things that are superhero-like. All those flips and being the best that you can be at your sport. When I met her in person, she’s just a regular girl hanging out with her friends, laughing. She was laughing so hard, she was such a good time. And [for me] it was like, wow, this person that represents America so well, not only represents, but she’s clearly like a superstar, you know what I’m saying? A superstar and a superwoman, like a superhero to me, and then it’s like she’s just a regular girl.

And when she quit [and took a break from] the Olympics, I was just like, “Oh my goodness! I wonder what’s going on? Maybe she’s sad? Maybe she’s going through things?” But I had to remember she’s just that regular girl that I met a couple of years ago. You can be on the top of the world like she is, just literally the top of the world for the first time and you just go through things like a regular person and I love her. I love her. It just reminds you that people might be artists or people might be sports players and they’re [a] superhero to you, but we’re still regular people that go through regular s**t. 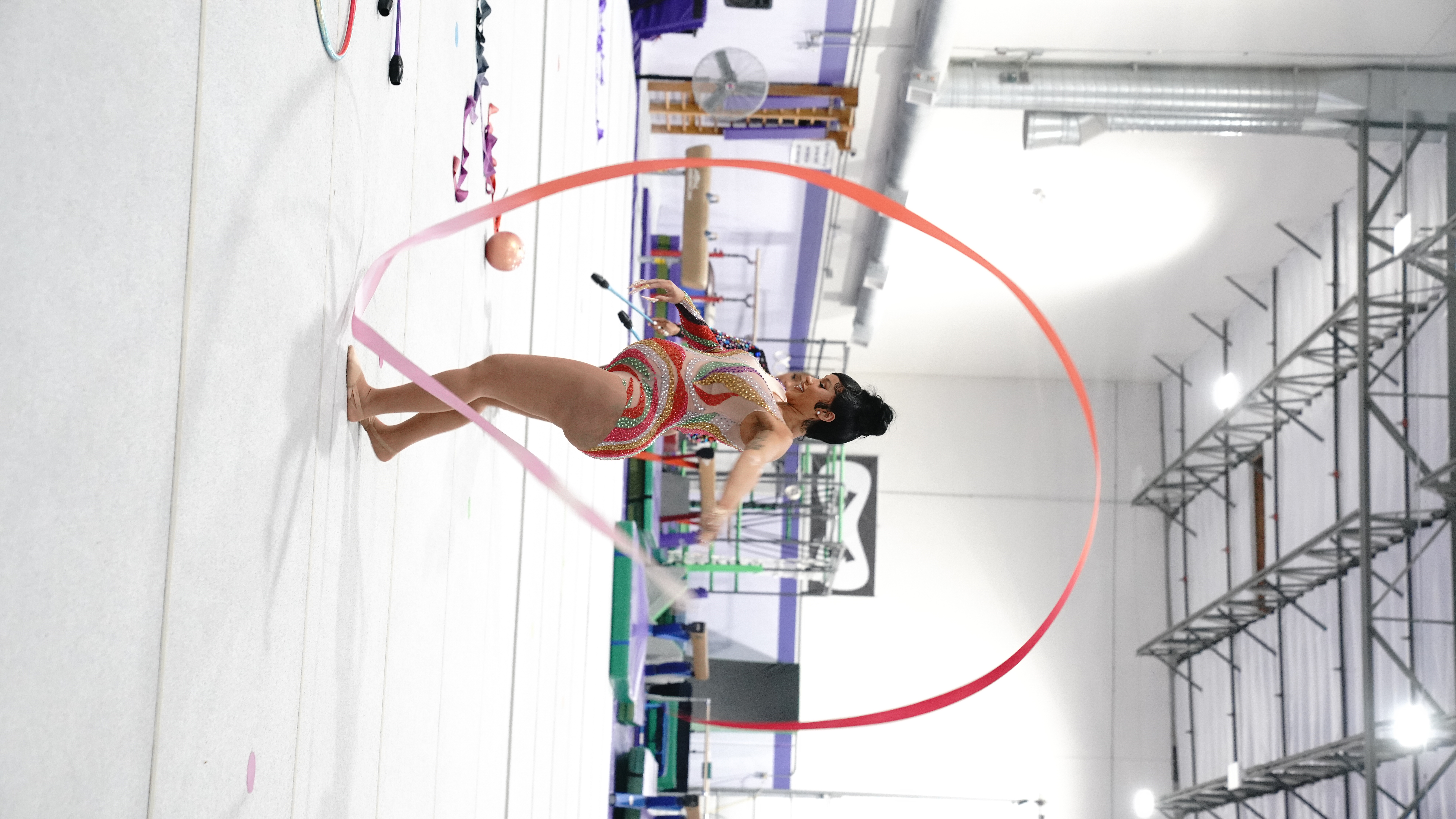 You recently appeared on Normani’s new single, “Wild Side,” which has been getting great reception. What was it like working with Normani and how did the two of you connect?

Well, I knew it was gonna be easy breezy because my stylist Kollin [Carter] works with her and he always tells me how sweet she is and how dope she is. Every single time that I’ve met her—I met Normani a couple of times before. We always used to do radio shows together—she was just always so sweet. This was when she was in a group [Fifth Harmony]. It was just real interesting to work on a solo project with her.

It was so nice. When we did the music video, nobody knew I was pregnant. She made me feel very comfortable in the environment and made sure that the sets were closed. I just think she’s such a sweetheart. She has so much potential with everything, she’s just amazing.

I always feel like I mention her mother. The music video and photoshoot days…it was a very long day. It was like a long morning and a long night and throughout all the time her mom was just there. I told her mom just, like “You can go home, it’s okay,” and she was just there. When I see moms like that that do so much for their kids and go hard for their kids, it makes me want their kids to win so hard as well, you know what I’m saying? I loved the whole experience and I’m excited for the world to see more of Normani.

“Wild Side” samples Aaliyah’s classic single, “One in a Million,” one of her most popular songs. As a fan, what are your favorite memories of Aaliyah and her music?

Not a lot of people know this, which was very very weird. When I was in elementary school, I wanted to perform “More Than A Woman,” and my school told me, P.S. 128, they was like, “This song is too grown for you guys, this song is too grown for you,” so I performed “I Miss You.” My little sister [Hennessy], she still won the talent show; She was dancing to Shakira and she just killed it.

And it is what it is, everybody just has the same memories [of Aaliyah], you know? I was really young when Aalyiah came out. I was still in elementary school and my older cousins always used to listen to her so when I used to go to their house, I used to listen to One In A Million, but I couldn’t really relate ’cause I was in elementary school. Then when she passed away, my mother bought me the Aaliyah [self]-titled CD. It was all red, and I feel like I know all the songs. Like back then, you would listen to the album over and over again. I think I [only] owned like five CDs (Laughs).