How far would you go for a pair of sneakers? Director Justin Tipping does a great job at answering that seemingly innocuous question in his forthcoming major film KICKS. The movie is a charming albeit problematic coming of age tale about curly haired 15-year-old Brandon (played by Jahking Guillory), and his mission for—you guessed it—his kicks. The East Bay Area native goes on a massive man hunt for his Air Jordans, after he was jumped for them by a local set of neighborhood bullies.

In efforts to undergo his journey all over the Bay, he recruits his homies: funny smooth talker Rico (Christopher Meyer) and Albert (Biggie Smalls’ son Christopher Jordan Wallace). The project is inspired by Tipping’s own grapple with sneaker theft when he was a teen. Like Brandon on screen, in real life Tipping was caught at the wrong place at the wrong time.

“I was jumped over a pair of Nikes,” Tipping told Filmmaker Magazine earlier this year. “It was much like it was in the movie. I had the white-on-white-on-white-on-white custom NikeIDs with my nickname engraved on them. I thought I was on top of the world. I was approaching a group of guys. I knew I was in the wrong part of town anyway. It was a kind of sketchy situation and I thought, ‘Oh, I’ll just keep my head down and keep walking. I’ll be fine.'”

Despite the footwear mishap, the movie chronicles themes of friendship, challenged masculinity, the realities of growing up in a inner city hood and placing importance on meaningless material things. VIBE got a first look at KICKS before it premieres in theaters on Sept. 9 during the 2016 Los Angeles Film Festival in June. Originally, the film first premiered at the Tribeca Film Festival in April 2016.

Before its release, VIBE caught up with actor Christopher Meyer, who has steadily been making a name for himself on shows like Wayward Pines as Mario and General Hospital as Danny Malloy. Here, he dishes on what it was like filming the movie, his favorite moments and what he thinks the message behind the movie is.

“I really hope people see that it’s just not about a movie just about chasing someone,” Meyers tells VIBE over the phone from Los Angeles, emphasizing how Brandon’s sneakers seemed like they were more significant than a person. “It’s about, ‘Do you really want to put this person down over sneakers?'”

VIBE:  How did you get the role, and what drew you in about playing Rico?
Christopher Meyer: I remember my manager called me, and the script came across his desk. We had been talking about the type of movies I was interested in doing. He told me maybe I’d be really interested. He sent me the whole entire script, and I instantly fell in love. And who wouldn’t want to play somebody like that? [Rico] is like a ladies’ man. He’s funny and I felt like I could relate to him in a number of ways.

In what ways do you think you can relate to him?
I think the most important thing about me and Rico is that he has an immense love for his brothers. For his friends—for people that hold him down, and I’m the same way in real life. 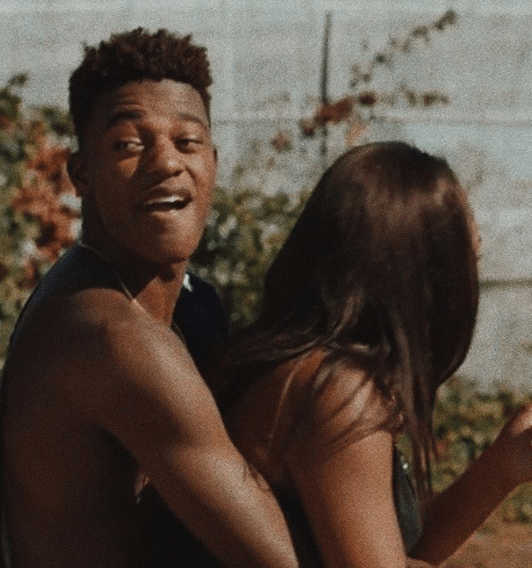 What was it like working with the other actors? Were you nervous when you found out you were working with Biggie’s son?
(Laughs) Working with those guys was so natural. When I met these dudes; we knew what we were doing; we all wanted to do the movie, so we acted accordingly. It’s really funny, I met CJ first at the audition, and we got to talking. He actually had this shirt that said “Notorious” on and after he left somebody was like, ‘Yo man, that was Biggie’s son.’ And I was just like, ‘No it wasn’t, get the hell out of here, you’re lying.’

For me that’s crazy because I grew up in Brooklyn. Biggie is like Jesus out there—being around Big’s family was honestly for me like a dream come true, and honestly CJ has just become a really good friend of mine. 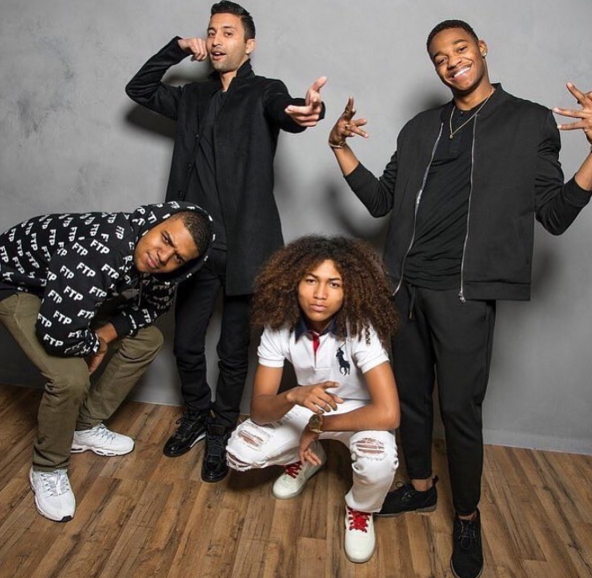 What’s your favorite Biggie song?
“Party and Bullsh*t.” Ironically, that’s in the movie. As soon as I saw the song titles on the script I would actually just go play that song while I was reading the script, just to get the vibe. And I listened to “Party and Bullsh*t.” I hadn’t listened to it in so long. I was like, ‘Man this captures the vibe of the movie perfectly.’ And ever since then, it’s something that I listen to like damn near everyday.

If you were Brandon, would you go on that journey just to get your sneakers back?
Those are the Bred 1’s, they’re sacred. I think I would have at least tried, somehow, someway. I don’t know if I would’ve made it at far as him. To be honest if someone actually jumped me and took my sneakers, I’d definitely be on the lookout for them. (Laughs) I’m not going to lie.

What’s the craziest amount of money that you’ve spent on sneakers?
I just bought some Jordan Aqua 8’s for $500. I never thought I’d be able to do that; those to me are the best-looking Jordans. I’ve fantasized about those since I was like twelve years old, and I seen them in Vancouver looking real, real nice, and I just couldn’t let the opportunity go.

What was it like shooting the movie in The Bay?
I got to give it to Oakland for helping me become Rico. We actually stayed in Richmond. We didn’t just shoot there, we stayed there. All of our hotels were right there. I think that was the biggest part of my character prep—was being in Richmond. I went out everyday, even when I wasn’t needed on set. I would go to the Hilltop Mall across the street. I’d talk to girls, talking to different people, meeting people on the street, meeting new friends.

What’s really crazy about KICKS is that there are about 10 people who are actually actors. Everybody else you saw in KICKS was somebody we actually pulled off the street, like someone we pulled from high school, or pulled off the corner late at night, because we wanted to capture that—the real vibe of Oakland, so I had a lot of time to spend with those dudes too, while we were on set.

What were some of your favorite scenes to shoot?
Definitely the chase scene; that was a long day of work but honestly, I had so much fun, it actually felt real too. Kofi is a fast person, like I did not know he was that fast. Like literally they had the steady camera and they were like, ‘Aight Kofi just chase him.’ There was a couple times where I looked back and he was really like five feet behind me, and I was like, ‘Oh, this is real, like I need to go.’ So that part, and probably the party scene. That was so much fun! (Laughs)

I can imagine, when I was watching it I was like, ‘They’re having fun!’
It was kind of like a whole hour of blasting music. That’s the thing with working with J-Tip (director Justin Tipping), he’s just so free in what he does. He creates this world, and he gives so much room and trusts us so much to operate it, so it’s just basically like he had a wide shot and he had different shots. He would just yell out certain things like, ‘Alright, do this!’ or ‘Now you give her a lap dance!’ It was like a party with directions, but it was like an actual party.

What do you hope the movie teaches our youth?
I really hope it pushes the message of real friendship. And not to place so much importance on materialistic things, and that violence doesn’t exactly mean being a man. Brandon going back to get his shoes, that has nothing to do with him actually being a man. I think putting down that gun at the end of the movie will help him become a man more than anything. So really just that violence doesn’t mean masculinity at all. And just friendship man, real friendship. All we have is each other on this earth. We got to cherish those relationships, not throw them away over stupid things.