When Jose Abastida was 11 years old, he and his family came to the United States in search of a better life. They migrated from Honduras to Florida with a visa, escaping the danger that viciously inundated their lives.

“I clearly remember a bank robbery next to our community,” Abastida says over the phone from Miami. “The robbers passed right in front of our house while shooting at the cops that were following them.”

Once they reached North American soil, family members aided them until they were able to stand on their own. Eventually they would settle in the Orlando-Kissimmee area of Florida.

Abastida went to Poinciana High School and later studied at a local community college. His father, an engineer back in their home country, instilled the value of an education to his children, no matter the circumstances.

“I remember at a young age moving from place to place, and always before anything, we had to finish our homework or study for the day,” Abastida recalls. “We always had to keep up with our studies.”

At first glance, the 25-year-old’s story seems like your typical immigrant coming-of-age, but he’s undocumented. Abastida is trying to productively coexist under a conservative government whose sole mission is seemingly to turn his life — and the lives of others like him — into a Rubik’s Cube.

He joins the approximate 800,000 recipients of the Deferred Action for Childhood Arrivals (DACA), an initiative enforced by the Obama administration in 2012, which protected undocumented immigrants who came here as children from deportation. It also granted them the right to legally hold a job.

In order to qualify for DACA, applicants must have a clean record and have graduated from high school, a GED program or the Coast Guard. Additionally, they would have to be younger than 31 years old as of June 15, 2012, and have been present in the U.S. on the same date and since June 2007. 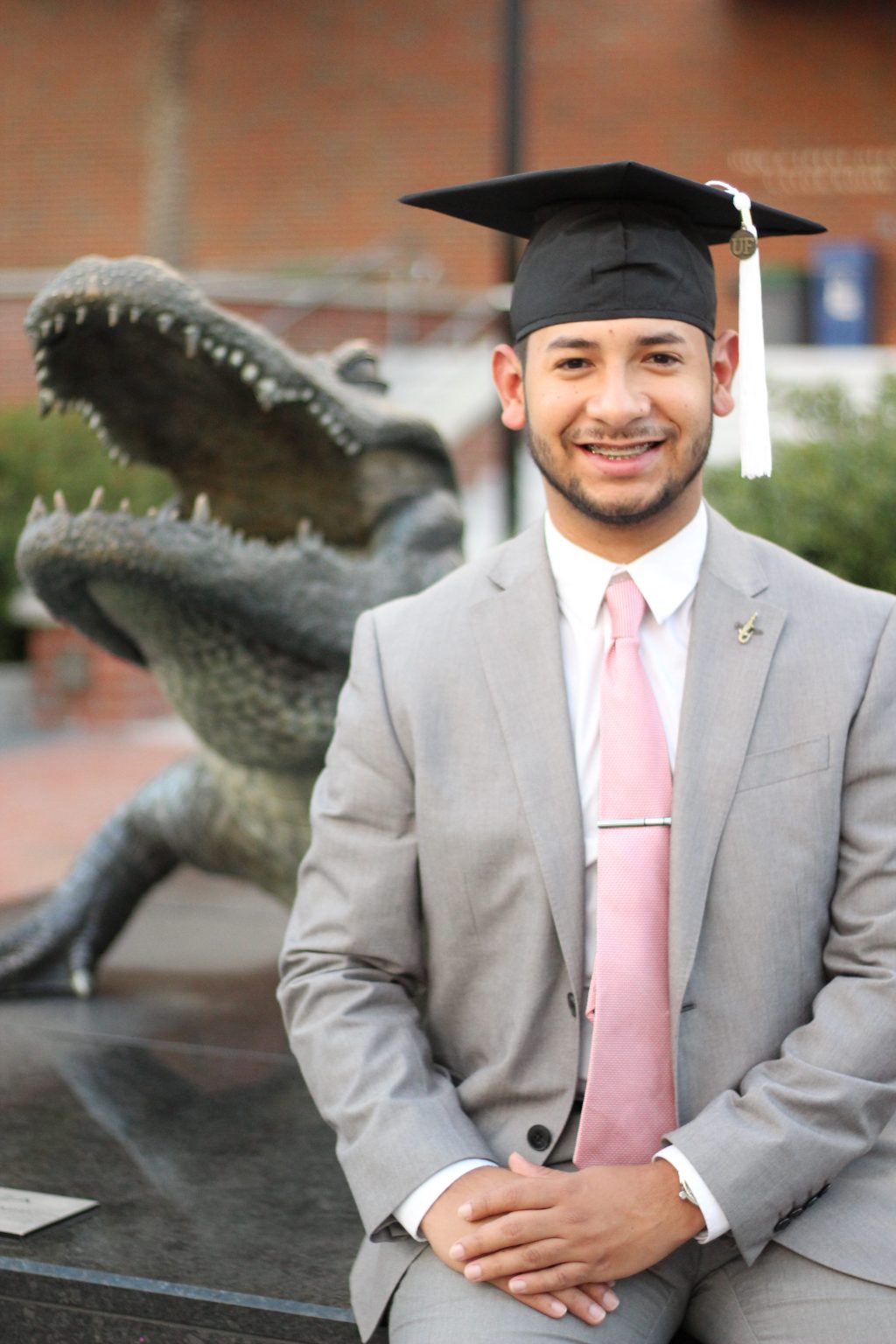 While in community college, Abastida had to pay out-of-state tuition. To make ends meet and finance his education, he worked odd jobs on construction sites and sandwich shops. He also waited tables. “I was just thankful I had something that would help me pay my school with,” he explained of the time before having DACA.

Soon afterward, he enrolled in the prestigious University of Florida, where he majored in political science with a minor in anthropology. His hard work paid off: Abastida landed an internship on Capitol Hill with the United States House of Representatives for the former representative of District 9 of the Orlando-Kissimmee region. He earned his position through the Congressional Hispanic Caucus Institute, an organization dedicated to helping young Latinos obtain government jobs.

Today, he holds a position as an organizer at the Service Employees International Union (SEIU) in Miami.

But his future, and the future of all DACA beneficiaries, remains uncertain.

On Sept. 5, Attorney General Jeff Sessions announced that the Trump administration would phase out DACA. “The executive branch, through DACA, deliberately sought to achieve what the legislative branch specifically refused to authorize on multiple occasions,” Sessions said. “Such an open-ended circumvention of immigration laws was an unconstitutional exercise of authority by the executive branch.”

Under the new executive order, DACA participants whose permits expire before March 5, 2018, are eligible to apply for a two-year renewal by Oct. 5, but the administration will no longer accept any new applicants. There are approximately 154,000 Dreamers with DACA expiration dates that run through the cutoff date in early March, according to Homeland Security spokesperson David Lapan.

Amid the tight deadline, law officials urge DACA recipients to seek legal assistance during these turbulent times. There could be some hope or other alternatives some might not be privy to.

“It is important for individuals with DACA to review their cases with qualified immigration attorneys. Things may have changed since they first applied, and maybe they now qualify for a permanent status,” immigration attorney Ann Marie Dooley informs us. “I have helped many individuals with DACA apply for their green cards through their spouses or through parents or stepparents who are citizens or lawful permanent residents. I have had others that were able to apply for U visas because they were victims of crimes in the United States.”

The same day of the announcement, POTUS later tweeted something many found less than encouraging: “Congress now has 6 months to legalize DACA (something the Obama Administration was unable to do). If they can’t, I will revisit the issue!”

Trump’s decision to put the lives of some 800,000 hardworking individuals at risk is simply cruel. Imagine having to overcome such numerous odds, only to have survived in a country — the only one you know — that ultimately doesn’t want you?

Not only is the order inhumane, it can also affect the nation’s economy in the long run. According to a research study conducted by AmericanProgress.org, 72 percent of the 25 of top Fortune 500 companies, including Apple, General Motors, Amazon, JPMorgan Chase, Home Depot and Wells Fargo, employ DACA recipients. These companies make up to $2.8 trillion annually.

Additionally, reports have surfaced estimating that if DACA were repealed, within a span of 10 years it would cost the federal government $60 billion in lost revenue. The economy would collectively lose $215 billion in GDP, according to a study conducted by the Cato Institute.

Because of their excellent academic track record and unwavering determination toward getting good jobs, DACA participants are an indispensable component of America’s economic system.

DREAMers: How Your Favorite Artists Are Responding To The DACA Repeal

Apple CEO Tim Cook, who employs about 250 DACA participants, said he would try to have as many immigrants as possible instead of trying to get rid of them.

“If I were a country leader right now, my goal would be to monopolize the world’s talent,” Cook said to Recode. “I’d want every smart person coming to my country, because smart people create jobs. And jobs [are] the ultimate things that create a great environment in a country. A land of opportunity. A land where everybody can do well if you work hard.”

POTUS, however, keeps sending mixed signals about DACA’s life expectancy. On Sept. 14, he tweeted: “Does anybody really want to throw out good, educated and accomplished young people who have jobs, some serving in the military? Really!…..”

There’s no telling what the future holds yet for DACA and the 800,000 lives that depend on it. But one thing is for sure: This country’s best and brightest aren’t going down without a fight.

Moving and powerful! ❤️✊🏾 – Repost @borderangelsofficial: “After spending the day leaving life saving water in the desert, our team paid an emotional visit to this iconic piece by @jr depicting baby Kikito as he peeks over the border wall, asking himself as we do, why he can’t cross to the other side. Amidst the sounds of children laughing and playing in Mexico, our team was somber while observing this inhumane juxtaposition while also warmed by the interactions we enjoyed with people on the Tecate side of the fence. We passed phones for photos, took selfies and joked together through the wall, and it went unsaid but understood that beyond borders we are all just people worthy of love, compassion, and connection and that walls can’t contain the human spirit. We hope with all hearts that by the time Kikito and those laughing children are old enough and aware, they are welcomed by a loving and peaceful world.” #borderangels #UndocumentedAndUnafraid #immigrant #immigration #DACA #NoWall

Juan Escalante, a DACA recipient who arrived in the U.S. from Venezuela and now works at America’s Voice as a digital campaign manager, isn’t throwing in the towel.

“I’d be lying if I said I wasn’t to some degree anxious or scared about what the future holds,” he admits. “But I know deep down inside myself, we didn’t get this program by just sitting around hoping. We got DACA because we fought for it. If I know anything, it is that DREAMers do not give up easily, and they make sure their point gets across.”

It’s around 5:30 p.m. on Sept. 5, and Foley Square, by the Brooklyn Bridge train station in New York City, is bustling with protesters. People of all creeds, colors and shades are holding vibrant signs in support of DACA.

“Our children deserve a future,” reads a small piece of cardboard in the hands of an elderly woman.

Flor Reyes, a young, undocumented Mexican woman with a loudspeaker microphone, is getting ready to chant as the crowd gathers closer and closer.

Mixed feelings of hope and sadness overwhelm me as I’m fixated on the scene. Everywhere I turn, there are signs. Everywhere I look, there are people coming closer and closer together, all seemingly united for this one cause. It’s touching, to say the least.

I begin to think about how trivial and unimportant a piece of paper is in the greater context of things, yet how divisive it is truly is all at the same time. It’s unfair.

The crowd starts to get riled up, chanting: “No hate, no fear, immigrants belong here!”