Janelle Monáe defies every label. She’s conveyed this through critically-acclaimed albums, charming film choices (Moonlight, Hidden Figures) and recently with her “Beautiful Future” campaign with Belvedere. For her second year with the brand, the singer-songwriter peeled back the brand’s iconic bottle design to demonstrate a piece of her own beautiful future.

While the next phase appears to be the bottle redesign, Monáe is also bringing context to inclusion through her creative and business fronts. 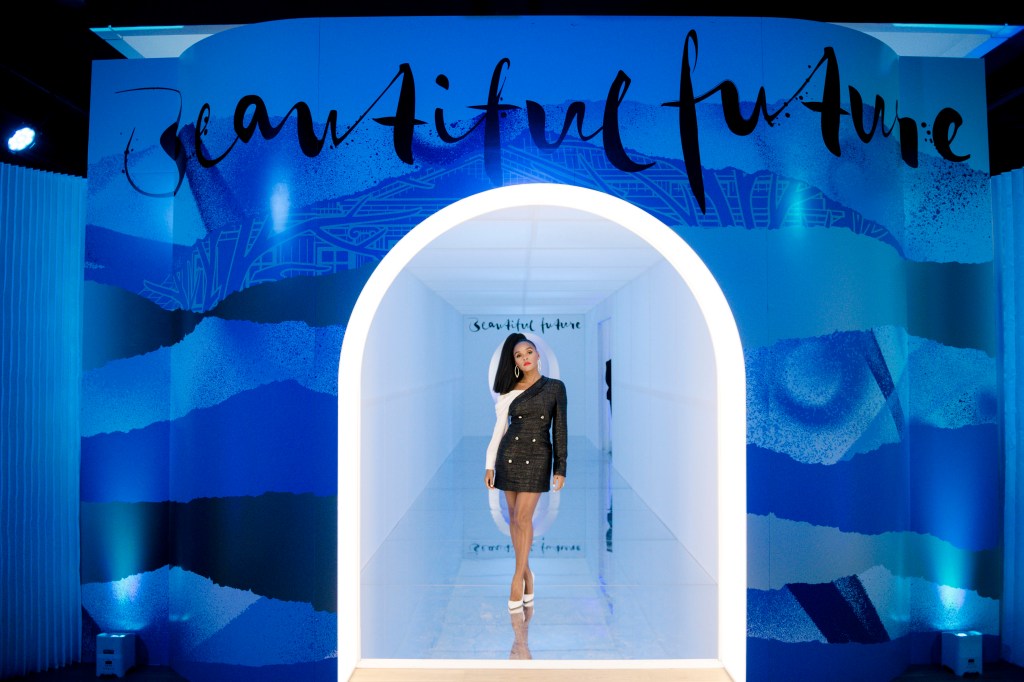 “I’ve had opportunities to listen and read so many people’s visions of what a beautiful future is and inclusion is the word,” Monáe tells VIBE. “Inclusion for my brothers and sisters in the LGBTQIA+ communities, for women, for immigrants. When we honor our uniqueness and our differences and we come to the table in our authentic selves, we can learn from each other and we can heal through conversation and that’s what I value. Simple conversations not with other artists or celebrities or folks in my world, but folks who are teachers, folks who are running corner stores, folks who are living paycheck to paycheck and still finding the beauty in life. It’s like, what is the purpose, what is that we’re trying to say here or trying to do? And I think this is a fine opportunity to continue these discussions, especially with the world we’re living in today.  There’s never a wrong time to promote positivity in the future.”

Monáe stayed true to her mission by incorporating her Fem the Future organization into the campaign, which was created as a response to the lack of women in film and media.

“Perspective is key and that is helping my future feel more and more beautiful,” she added. “Every day that I get have a better perspective, I get to be a better human and I get to stand with a community of marginalized voices that have something to say that may not have been amplified in a way that they should have been.”

The singer’s influence could not be denied, Belevdere President Rodney Williams says.

“When you see an artist like Janelle Monáe who is reaching back to pull people from the community, to pull people forward, to push others and encourage others, she deserves our support so we look at it as an honor to be working with her,” he said. 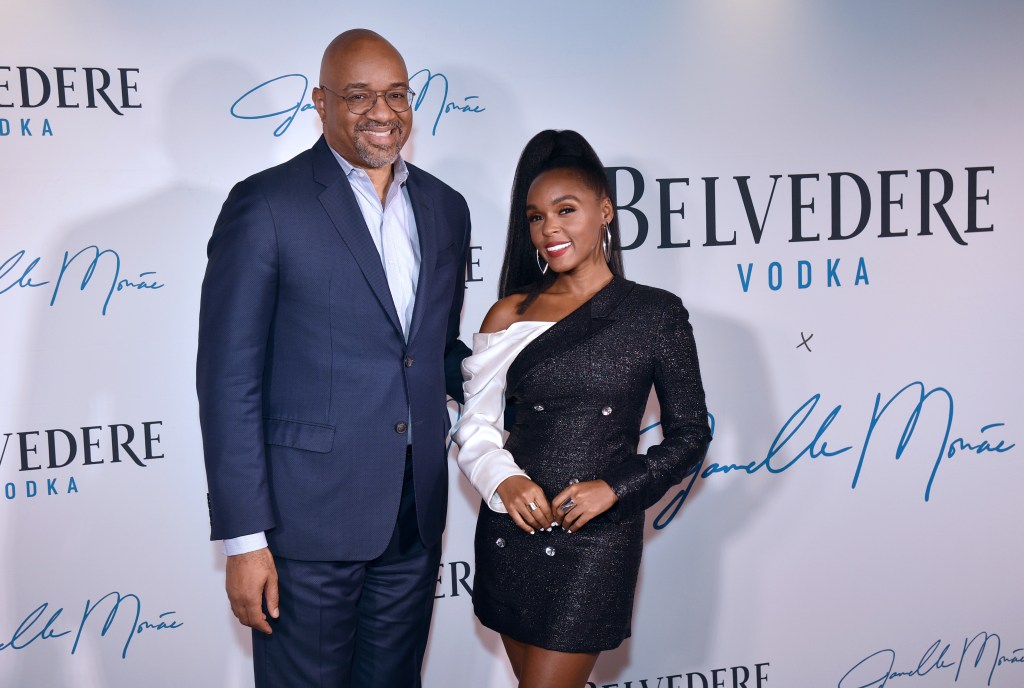 “She really lives her values and when she talks about inclusion, she really lives that way. Her whole team (Wondaland) are apart of her decisions, they’re apart of her collaboration and we appreciate that because you get the benefit of everyone’s best thinking and she holds very true to this idea of inclusion and empowerment of working with African-American women, in particular, to have their voices heard and recognized.”

When we honor our uniqueness and our differences and we come to the table in our authentic selves, we can learn from each other and we can heal through conversation and that's what I value.

There’s something to be said about black artists in the spirits space. Multi-hyphenates like Diddy, 50 Cent, Jay-Z have earned pretty coins for their brands like Ciroc, Effen Vodka and Dussè. Collaborators have done the same with Virgil Abloh bringing his signature designs to Moët & Chandon’s champagne (A la “Do Not Drop” white font).

For Monaé, the Grammy-nominated creative wanted enthusiasts to enjoy every detail, which includes a “Beautiful Future” sitting comfortably between layers of silver and blue hue. 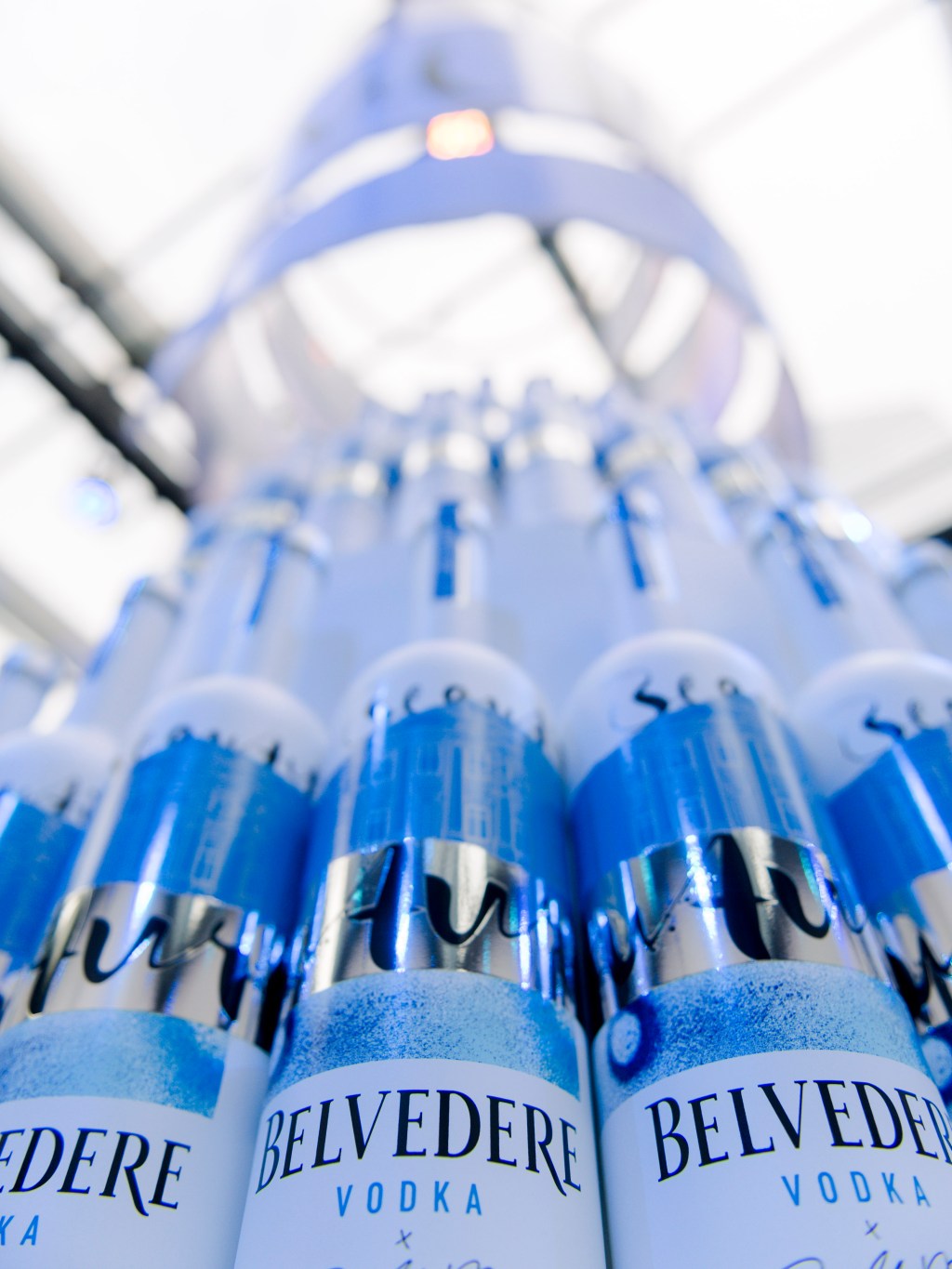 “When I was working with Belvedere on this Beautiful Future bottle, one of the things we talked about was the importance of peeling back your layers,” she said. “You can not get to your uniqueness, your individuality unless you peel it back. When you look at the bottle, you’ll see designs where you peel back. The ridges are deliberate. We were trying to make something that felt like the future, it was integrated early on.”

The outcome was loved by all, including Belvedere.

“[We] loved it. We held our breath internally because the Belvedere palace has always been on our bottle since the very beginning and that is the palace itself is in Poland where the Belvedere is made which is the version of the White House,” Williams said. “But we took it all of and just put the Belvedere name and said, ‘Let’s have at it.’ And the design is so Janelle. It’s so striking, it has different edges and curves to it where you don’t expect it.” 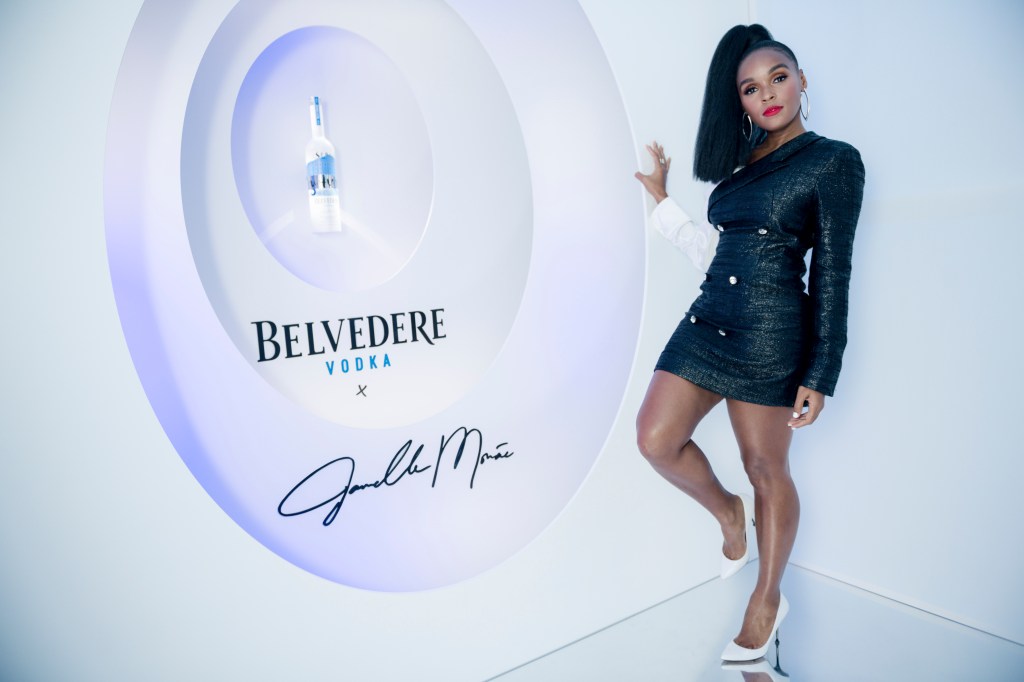 The singer’s flair is just as striking as her other talents. Monaé promises more shake-the-table moves in the film space with her Wondaland Pictures production company.

“My hope is that by next year, we can have movies in production and I can amplify more women’s voices, more honest voices who have a different perspective and want to contribute something to the culture, to push it forward,” she said. As an artist who has toyed in the Afrofuturism space, Monaé is more than confident about the paradigms in theatrical cinema–especially when it comes to actresses of color.

“I think for so long you didn’t see us in those leading roles, you didn’t see us in those spaces, you just think we wouldn’t exist in space,” she said in reference to actresses like Tessa Thompson in the Men II Black franchise and Nicole Beharie’s latest role in Black Mirror. Young actresses are also making their mark in the sci-fi space as well with Eden Duncan-Smith’s electrifying role in the Netflix film, See You Yesterday. Even Monaé’s audiovisual (or “Emotion Picture”) of her Grammy-nominated album Dirty Computer was everything we wanted the latest season of Black Mirror to be.

“We’re not just like the cool black friend invited to the party,” she said about black film stereotypes. “We can be the hero, the villain, everything we want. Somethings bubbling for sure. I’ve been talking about science fiction since the beginning of my career. If you look at all of my albums, all of my work is rooted in sci-fi. And that’s science fiction Afrofuturism is what I like to call it when you see us the future because Afrofuturism allows us to dictate how we are in the future. You know, we don’t have to be the first one killed in a thriller. We can live and we can survive, we get to determine how we’re viewed in the future on our terms.”

As an artist who frequently resides in the hip-hop space, Monaé wants her vision of a beautiful future to include LGBTQIA+ in the rap space. With Pride month in the rearview, Monaé hopes conversation as well as collaborations continue without gimmicks.

“I think we have to start looking at each other as a civilization that literally rely on each other to survive,” she says when asked on hip-hop’s relationship to the LGBTQIA+ community.

“We depend on each other to survive. When something is wrong with me or you, it should affect the person who may not be directly affected at that time. And by that, I always ask people to ask this question; Do you feel it is your responsibility, as a privileged person, with rights with not having to defend your sexuality, do you feel that it is your responsibility to help and protect those who may not be as privileged as you? That is a question you have to ask yourself. And I hope that the answer is yes. Just think, just imagine, if we stood up for each other and if we used our privilege and our power to address systemic racism, systemic sexism, systemic homophobia, those things that are seeking to divide us. Those are the conversations that we have to keep having and that’s why I’m having them.”