To watch The Chi is to commit yourself to a world that’s rarely forgiving, but always authentic. On the new season of Lena Waithe’s critically-acclaimed Showtime drama, you’re as likely to see the elderly beaten to a bloody mess as you are to see a handcuffed black, pre-teen boy in prison garbs escorted to a judge by police. Jason Mitchell has been central to some of the show’s most morally complex commentaries on the world, and the 32-year-old actor has a few of his own.

In the first season, Mitchell’s character, Brandon Johnson, dealt with the death of his brother Coogie Johnson (Jahking Guillory) and how gun violence can ensnare the innocent in the insidious until “right or wrong” are replaced with “survive or die.” In the upcoming second season, Brandon’s optimistic disposition begins to be hardened by the cold reality of the streets. He grows into a man whose resolve is unshakable because any indecision could be the difference between life or death.
That temerity leads the prodigious chef to question the authenticity of everything around him, including the racism against their own that other black characters have internalized. For Mitchell, he’s not that divorced from the views of his character and hopes The Chi can be more than something to watch on Sundays.

“I hope with shows like this we’re not only able to create jobs, but we’re also able to create this truth for ourselves, as black people, that we can understand,” Mitchell explains. “We can have the heart to say, ‘Okay, I’m going to take that L. That was our fault.’ because [Nipsey’s death] was our fault.”

Speaking with VIBE before the season two premiere on April 7, Mitchell discusses how Lena Waithe put together the new season, what The Chi can show us about Nipsey Hussle’s murder, and the most emotionally challenging scene of the series so far.

VIBE: What are some things that Lena Waithe spoke with you about, in regards to season two and what’s happening with Brandon?
Jason Mitchell: It’s interesting because it’s always a group effort to make these things happen. Initially, she came to me and she was like, “Where do you see Brandon going?” To me, it was the wildest question I had been asked as an actor. Not that it was far-fetched, but normally in film, you have this beginning middle and end structure. You have this character arc. You know exactly where this character is headed. When she approached me with that, it kind of puts me in a different mind frame. So digging deep and going into who this character can be is a real question.

Brandon seems to be tougher and stand his ground more this season. With having input into how your character is shaped, how did you approach playing Brandon this season?
It’s never easy to lose somebody. But, when you lose somebody and you kind of don’t have closure…He knows who did it, but he doesn’t really have closure. It’s always tense. You can always cut this tension with a knife that’s in the air. I wanted to take that and just put that in his everyday life. That dark cloud that’s over his head, I wanted that to be so prominent. People want to help him out of it, but it’s the reality he lives in.

There’s also generational tug-and-pull between people from the old and new Chicago. A hallmark of this show is how there are great actors of all ages, so no one part of The Chi feels less engaging than the other. Does the generational tug-and-pull form the show ever show up on set?
I do see that. The conversations may be different. It’s always funny to hear children curse. (Laughs) A lot of the time, I come and support the kids. Me and Alex [R. Hibbert, who plays Kevin] have a real close relationship. His first kissing scene, I was there. A lot of stuff, I’ve been there for him. I’ve seen some things where you see some children who are extras try to pick on the ones that are excelling. If you’re the star of the show, they want to pick on that person. They want to throw stuff at that person. They want to do all kinds of different things to bring that person down. Things like that happen all of the way until you’re an adult. As a child, you’re so ruthless. Also, when you do something so powerful, something that means something on so many levels to so many people, you’ll get the negative energy, but you’ll also get the other side of where people are super happy with you.

That’s why the show feel so authentic, because of these dynamics. Like your parental relationship with Kevin actually comes from a real place off-screen. There’s a lot of emotionally heavy episodes. What was the most emotionally challenging scene in the first season you had to do?
They had the scene in episode four where me and Kevin run into the alley and he shoots Ronnie. The whole process of, okay, my first mind is: Protect this kid. Then my second mind is: This kid set me up. Then my third mind is: I kind of want to beat him up and leave him in the alley. My fourth mind is: I could never hurt this person. I have to protect them. All of that, and I have to internalize this fear I got going on because we just shot somebody.

That definitely was a pivotal moment for the maturation of your character. Without revealing any spoilers, is there a scene you filmed in Season Two that you could say was more emotionally challenging than that scene?
Absolutely, because….damn, I can’t give it all away. There’s a scene with Kevin and I think it’s where I start to realize and internalize the fact that my brother’s not coming back, that’s over. This new situation I have going on with Kevin, I’ve got to be strong. I definitely got to be strong because he got stuff going on, too. He counts on me to put a smile on his face. If I run around moping, he’s going to run around moping. It’s a crazy scene.

A great aspect of The Chi is how it highlights big-name and underground artists. This season has popular Chicago artists like Towkio, Vic Mensa and Taylor Bennett mixed in with artists who have less than 10,000 followers on SoundCloud. Have you been put on to new artists through the show?
Absolutely. Even more so, I’ve helped them get put on because I try to lead by example. If somebody stops me on the street like, “Hey, Jason, I have a shirt. I want to put it in the show.” I’m like, “Alright.” All I have to do is relay the message. It costs me nothing. I try to lead by example. I got people I’ve met, like Noname, who I was put on to by Lena. Other indie artists, too. Just really dope artists from Chicago that aren’t afraid to walk up to you like, “Yo, dude. What’s up with that?” I’ve had a lot of fun with that. Chicago is probably my favorite place next to New Orleans. 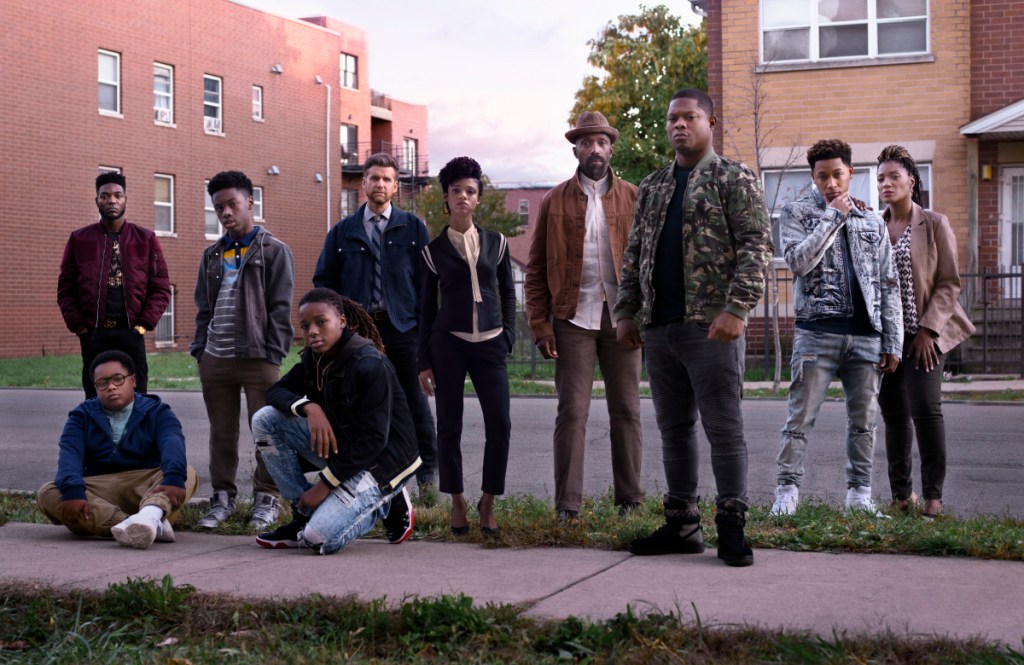 Speaking of your connection with music, you had a relationship with Nipsey Hussle. He was tragically murdered recently. How did you know Nipsey?
First of all, I want to say rest in peace Nipsey Hussle. I actually met Nipsey at Dre’s studio when we were making Straight Outta Compton in 2014. Nipsey was originally supposed to be on the Compton album. He was recording this crazy, crazy track. He was immediately cool.

Do you see any connection between the way The Chi portrays gun violence and Nipsey’s shooting?
He’s a friend of mine. He’s been a good dude since I’ve known him. [The day of his murder] was a tough day for all of us. I was out here in L.A., so I feel like I really, really felt it. I also lost another good friend of mine, his name was Young Greatness. Me and him actually grew up together. I feel like the revolving door of gun violence is what [The Chi has] been trying to put out there to people that it’s not only gang violence.

We get to give real insight on what’s going on and we get to flash a light on what’s going on. That way people can’t just walk past a billboard that’s interactive that says, “Oh, 77 people were shot this weekend.” Then it just goes away, and then something else plays, and the feeling goes away. To me, in this situation, I feel so slapped in the face [when Nipsey was murdered] because, black people, we lose to ourselves so much. I hope with shows like this we’re not only able to create jobs but we’re also able to create this truth for ourselves, as black people, that we can understand. We can have the heart to say, “OK, I’m going to take that L. That was our fault.” Because [Nipsey’s murder] was our fault. I don’t care what anybody says. Nipsey might have had this conspiracy jacket over the whole situation, but no matter what, it was still a black man who jumped out to kill him. We keep killing ourselves. We keep killing our leaders.