It’s rightfully challenging for Kash Doll to align a track from Stacked to her everyday mood. Much like her layered debut album, Arkeisha Knight is full of admiring qualities and feelings. Charming yet vulnerable, aggressive but reserved, the rapper also possesses one thing many crave—confidence.

Her high morale has been one of the most consistent traits, earning fans from all over the boss lady’s spectrum like Rihanna and Serena Williams as well as co-signs from the top rappers in the game (Drake and Big Sean to name a few). But these things aren’t aligned to her spirited aura. “It’s hard to explain because it’s a mix of the dance world and the confidence my mother put in me,” Kash tells VIBE. “When I was growing up I started to believe in my greatness and say, ‘I am that I am that.’ I’ll tell you one thing, can’t nobody tell me sh*t.”

Pulling that energy from within is something black women do so well. A 2017 Harris Poll arranged by Glamour and L’Oréal Paris discovered black women, in fact, are more confident than their white and Latinx counterparts. The study, comprised of 2,000 women across America, revealed black women were more likely to describe themselves as beautiful and successful. But we don’t need stats to prove what we already know.

As black women continue to break barriers, we’re often met with pushback—especially in the music industry. Women who happen to be rappers have been vocal about this throughout the genre’s existence. Think Queen Latifah’s glorious “U.N.I.T.Y.” track. Consider how people questioned the pens of Lil Kim and Foxy Brown. Take a listen to Nicki Minaj’s testimony from her My Time documentary. Even rewind the very awkward times industry heads glossed over Cardi B. With more women in rap dominating the charts and the culture, artists like Rico Nasty, Doja Cat, Rapsody and Kash Doll are bringing their own bold cocky flavor to the table.

“When you love yourself, you don’t try to hide it,” Kash says. “You’re either going to take me as I am or have nothing but either way, I’m going to be me. People that like me, I f**k with you and if you don’t, well f**k you. I ain’t gotta talk to you and you don’t have to listen to my music. We don’t have to fake it, for real.” 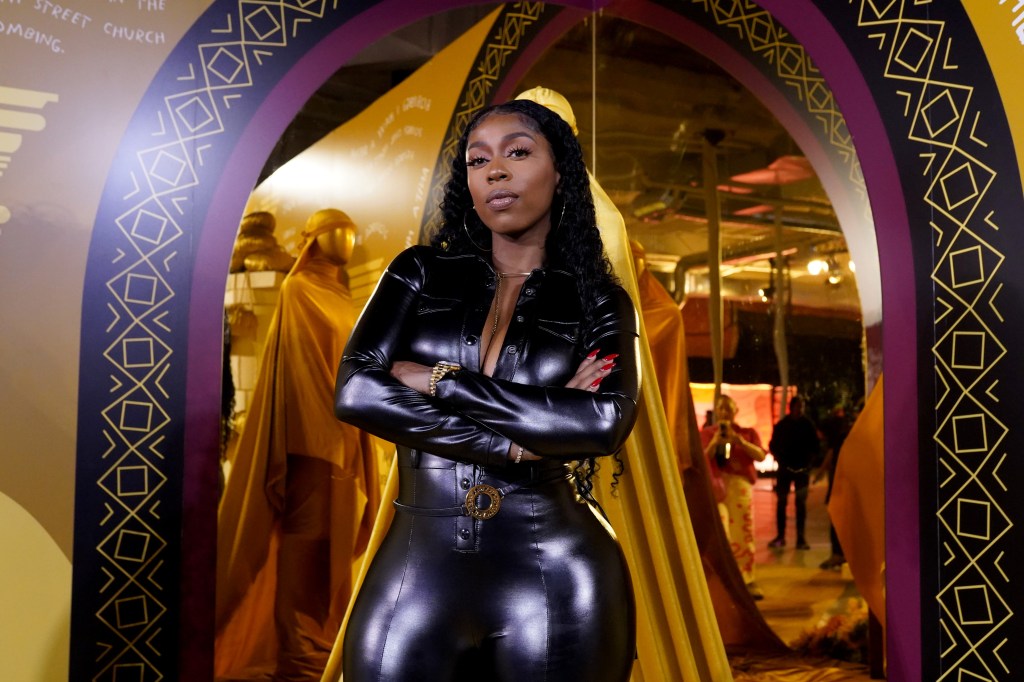 It explains a lot about Kash Doll’s identity on and off wax. Her year has been a big one thanks notable appearances at Rolling Loud’s first New York turn out, scoring crossover status with collaborations with Iggy Azalea and the star-studded Charlie’s Angels Soundtrack executively produced by Ariana Grande. Through all of this, her biggest win is the gift of loyalty received from her fans, the Kash Bratz.

I don't want anyone to ever put me in a box.

“I never knew what it meant when artists said they would be nothing without their fans but I get it,” she says in between laughs. “Them Kash Bratz, they keep me on my toes. They keep me going since they only want content.” Their wishes were granted with Stacked. Released late fall, the 17-track album provides effortless bad bi**h anthems like “Paid B***hes,” reworked gems (“Cheap S**t” from Keisha vs. Kash Doll is a pleasant surprise) and strong collabs with the hottest women in R&B like Summer Walker (“No Lames”) and Teyana Taylor (“Feel Something”). 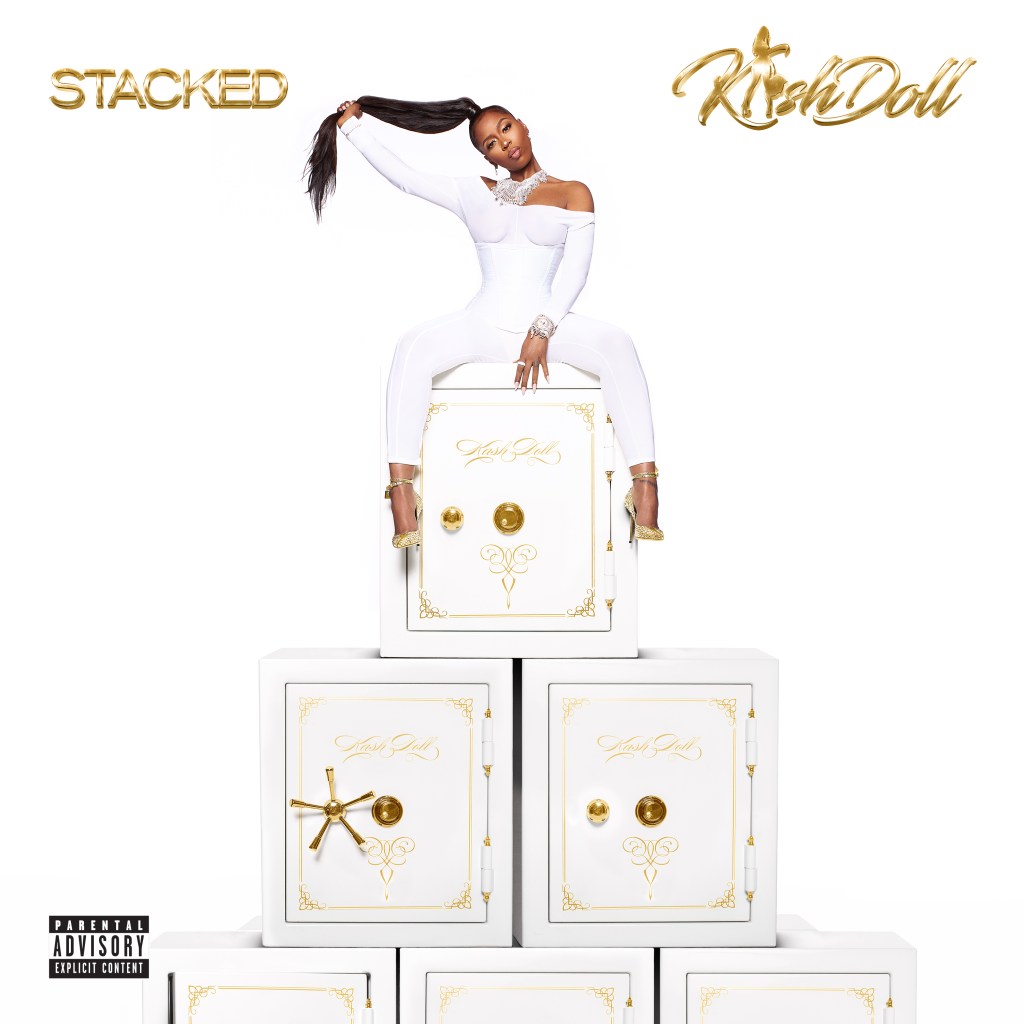 The album’s intro “KD Diary” provides a peek into the pages of Kash Doll’s intriguing life and the battles she’s faced in between. Her father’s passing at a young age makes her cherish love at a special level while legal drama with her former label taught her a lesson in pushing through the most severe blows. Now signed to Republic Records, Kash officially broke free of her previous label which kept her in a legal battle for almost two years. After wrapping up “that paperwork” she scored a hit with her major-label debut, “Ice Me Out” in 2018. It was a perfect segway from her very viral track “For Everbody” which showcased her strong storytelling skills as she imagined the conversation between Belly character Keisha and Tommy’s young sidechick. As she notes on “KD Diary,” touring without her music on streaming services forced her to grind at an old school level in a new school digital world.

“I just wanted to give a heartfelt moment,” she says. During her ascension to the top, her lyrical chops dished out standout tracks, but Kash wants people to get a glimpse of the woman behind that Detroit grit. “You’ve heard all these songs but do you know me? Have you ever had a chance to get an understanding of who I am? So that’s what my inspiration behind it was,” she explains. “The intro was called ‘KD Diary’ because it really is like one. It’s like I’m spilling all my beans.”

A hometown hero through and through, the rapper has been steadfast in making sure her 2019 was everyone’s golden year. On the fashion front, she rocked brands from local designers like Jennifer Walker’s Furluxx fur coats. She also surprised mothers on Detroit’s east side at the 7th Annual Breastfeeding Community Baby Shower, has continued her high school prom giveaways and supplied families with free turkeys during the Thanksgiving holiday.

Her genuine nature is also extended to peers in the game as she continuously shows love to Megan Thee Stallion, Fabolous and “Crazy” collaborator Lou Got Cash. To Kash, the only thing that matters is living life to the fullest and staying clear of any drama. It’s why she remains focused on her grind and cementing her place in the game. Settling previous spats with peers Lil Kim and Cardi B has been a part of that as well as celebrating the gift of life with her day ones.

“It’s amazing because it’s what I always wanted,” she says of her success. “I don’t want anyone to ever put me in a box. I never wanted people to say, ‘She’s this kind of artist.’ It just makes me feel like this is what I was destined to do, and it’s so amazing, so amazing.”