It’s a deceivingly sunny February afternoon on Hollywood’s Universal Studios production lot, one of those days where you might regret leaving your track jacket back at home. Here inside Stage 37, the vibes are warm on the first press day for the much-thirsted blockbuster action flick Furious 7. Tyrese Gibson has already passed through the set for a quick photo shoot to support the seventh chapter of the series that first put pedal to metal with 2001’s The Fast and The Furious—he joked about going home with his stylist-selected clothing. Ludacris is wandering the historic lot, the filming home to motion pictures like Jurassic Park and Idlewild. And walking muscle Vin Diesel is around here, somewhere. Yet there’s one question floating in the air like Los Angeles smog: Is Michelle Rodriguez going to show up?

It’s not like the billion-dollar franchise’s girl power is a chronically AWOL rapper with a babysitter for a manger. But with promoting her latest movie role comes questioning that could pick at real-life wounds that are not quite healed. Such as the tragic death of universally loved actor Paul Walker, who starred in all but one of the F&F films as undercover-cop-turned-underworld-speedster Brian O’Connor. On November 30, 2013, shortly before he was scheduled to finish filming Furious 7, Walker was killed in a car accident, devastating the entire cast and halting production for four months. Word finally comes in: The 36-year-old actress will agree to an interview under the condition that there are no queries about Walker. VIBE obliges.

The track to Furious 7 has been a heart-wrenching one for everyone involved. But the badass Latina is all smiles and laughs once she walks into the movie studio, sporting a black dress that clings to her carved figure like a Mustang drifting around curves. She snaps a few photos that are tender, yet strong, evoking the persona of her character Letty Ortiz, racer and arm candy to Vin Diesel’s Dominic Toretto and shero to girls around the world with a wild streak. Now starring in her fifth F&F film, Rodriguez sits down in a director’s chair to speak about her on-screen counterpart’s complex storyline, memories of Jersey’s street racing scene and why she’s down with Rihanna’s “Navy.” —John Kennedy

Digital Cover: Vin Diesel Calls ‘Furious 7’ The Most Important Film Of The Millennium

VIBE: Let’s start from the beginning. What intrigued you about the first The Fast and The Furious?
Michelle Rodriguez: The cars. And the fact that I had to get a driver’s license just to be in the movie. I had been driving cars—but not legally—for a while. And street racing of course was exciting, because I’m from Jersey and you’ve got those Mazdas where they take the Toyotas and they mix parts together, that tune-up scene was huge where I grew up. I wanted to be part of that world. And it was my first Hollywood feature film. So for me I was just excited to be introduced to action: That whole idea of being able to jump out of windows, break things, blow things up, shoot people, it was really cool to me. I was also in my 20s, man, a bit more chaotic back then.

Where in New Jersey was that racing scene?
The racing scene that I know of was after-hours when all the shops by the water close. Right by where the Colgate sign is. I remember a bunch of kids getting together late night and just doing straightaways, quarter-mile runs, and just racing. Motorcycles, too. The motorcycle scene was huge back then. A lot of my friends were down with that world. I was always wishing that I had money to buy a car. I was a little broke ass back then. [Laughs]

I was just excited to be introduced to action: That whole idea of being able to jump out of windows, break things, blow things up, shoot people, it was really cool to me. 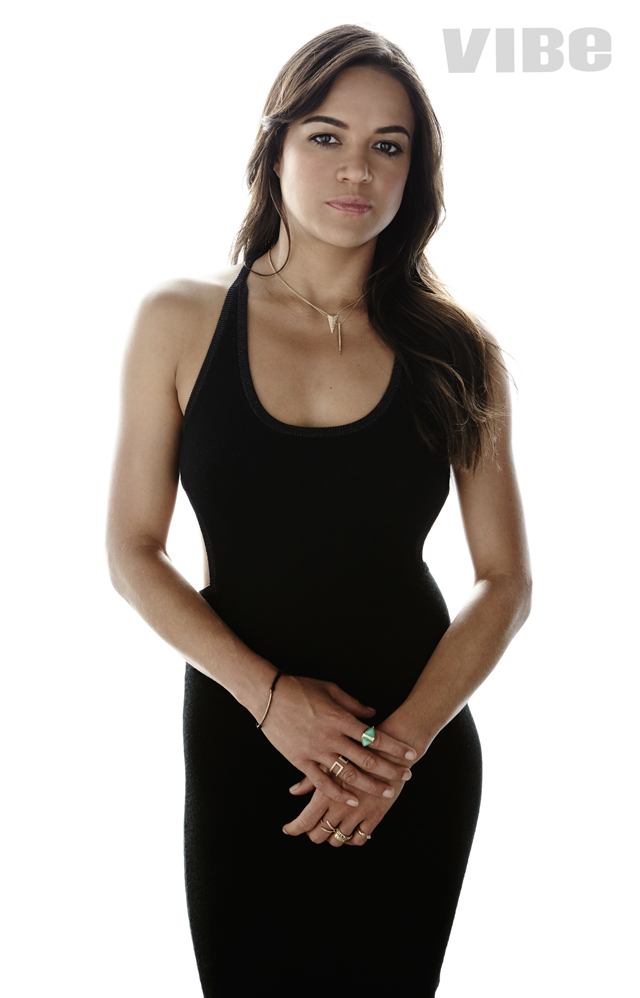 That first movie set the tone for your career as one of the baddest badasses in Hollywood.
[Laughs] I love it, man. When I was growing up into my ’20s, there weren’t a lot of girls really doing anything fun—what I thought was fun—because I’m a tomboy, always hanging out with the boys. I just felt like Hollywood didn’t take girls seriously back then. All of my favorite action stars were dudes. It was like the Stallones and the Bruce Willises and there weren’t a whole lot of chicks to really look up to, other than like Sigourney Weaver and like Linda Hamilton. Now you’re starting to see it open up more. Maybe when Hillary Clinton becomes president it might open up further.

Word has it that Furious 7 is the most ambitious of the seven films. How did you guys elevate the bar?
Are you kidding? These guys are always trying to top themselves. The producers and actors—I remember so many moments trying to think up things to do. Is it gonna be drifting? How high can we make a car fly? What haven’t we done yet? And how can we do it? And that’s kind of the legacy that’s kept it alive for so long.

Your character, Letty Ortiz, has gone through a lot in this series. How does she progress in this film, particularly dealing with the aftermath of amnesia?
She’s been through a lot. Her arc in this one is just about that frustration. Your entire life is made up of memories. And everything you share with all the people you love, it’s made up of memories. When you don’t have that, you lose a connection. And when you have a family that’s ready to die for each other like that, you feel that sense of loyalty but you don’t understand why, because you don’t have the pictures in your head to put it all together. It can really get at you. Especially if you’re in a love situation, where you’re enamored by this person and you’re in love with them, but they have all these memories that you can’t share with them. You feel like you’re being cheated of a life. And I think that her arc has become really, really interesting because of that.

She’s been through a lot. Her arc in this one is just about that frustration.

Jason Statham joins the cast this time around. If you could add any one actor or actress to the franchise, who would it be?
Rihanna. I like that urban world. I feel like there’s this whole crew of motorcycle riders—remember Eve and the Ruff Ryders? Rihanna kind of represents a mixture of that with a punk twist. She crosses those lines so it’s kind of Rock stary at the same time. I picture a whole crew of motorcycle mofos riding hard. Very Beyond Thunderdome. I like her, she’d be really dope. But you don’t know what the writers are gonna do next. I can push them for it, but they gotta pay some dough for her [laughs].