Madam C.J. Walker (born Sarah Breedlove) is one of the most impactful figures of the 20th century. Still, as is the case with many Black historical figures, the general public knows very little about the first American woman and self-made millionaire. Born to recently freed slaves on a cotton plantation in Louisiana, Walker was a laundress before discovering her true passion, Black women’s hair care. In addition to building her beauty empire, the entrepreneur and philanthropist worked diligently to enable other Black women to earn money outside of domestic labor.

At the turn of the 20th century, the world was incredibly dangerous and riddled with adversity for Black women. Walker encountered overwhelming racial and gender biases, along with personal betrayals and business rivalries. Yet, none of this deterred her from revolutionizing Black hair care and kicking open the door for the billion-dollar industry that it is today.

Now, 101 years after her death, Netflix is bringing Walker’s magnificent life into the 21st century with a limited series helmed by prolific director Kasi Lemmons and director DeMane Davis (Queen Sugar, How To Get Away With Murder). Starring Academy-Award winning actress Octavia Spencer, Self Made: Inspired by the Life of Madam C.J. Walker follows the cultural icon’s hard-earned journey, from the scalp disorder that caused her hair loss, to becoming the wealthiest woman in America. In addition to Spencer, the four-part series stars actors Blair Underwood as the entrepreneur’s husband, C.J. Walker, Tiffany Haddish, as her daughter Lelia, and Carmen Ejogo as her business rival Addie Munroe. Garrett Morris, Kevin Carroll, and Bill Bellamy also star in the series, based on the biography On Her Own Ground by Walker’s great-great-granddaughter, A’Lelia Bundles.

Lemmons, who has given cinema some of its most timeless films centering Black women including Eve’s Bayou (1997) and Harriet (2019), spoke with VIBE about the effort it took to bring Madam C.J. Walker’s life to screen. The director also discussed why colorism and sexism within the Black community are topics that we must continue to unpack.

VIBE: When did you first learn about Madam C.J. Walker?

I can’t remember when it first was, but I know that I’ve been trying to do a movie on her for like 25 years. I’ve known about her for a very long time. She’s a part of our remarkable history, especially as Black women. Black hair is so essential to our culture.

What Madam C.J. Walker built was almost implausible for a Black woman during her time. What stood out to you most about her story?

In Madam C.J. Walker’s time, a lot of people didn’t even have plumbing, so just the hygiene alone for hair care was compelling to me. The idea of taking the time to cleanse and beautify your hair, for a generation of women that had a lot of other things on their minds. Basic survival was at the forefront of their minds. Looking at old photographs and seeing these intricate hairstyles on these every-day women was incredible.

Joining you on this project was director DeMane Davis, writer, and co-executive producer Nicole Jefferson Asher, as well as showrunners Elle Johnson and Janine Sherman Barrois. Black women truly spearheaded this series. Why was that vital for Madam C.J. Walker’s story?

There’s such a feminine force of nature in Madam C.J. Walker. I think we were all inspired by that, and it became a mission that moved everybody, including Netflix, to get on board. It’s the type of thing where you need support to build that vision. You need other people to think it’s essential, too. We had meetings where there were no men in the room, and that was incredible. We were women having a very high level of creative conversation and directional conversation about the entire production. I’d never been in that situation before. Women also led Harriet, but in terms of being all women in the room, my first time witnessing that was on this project. 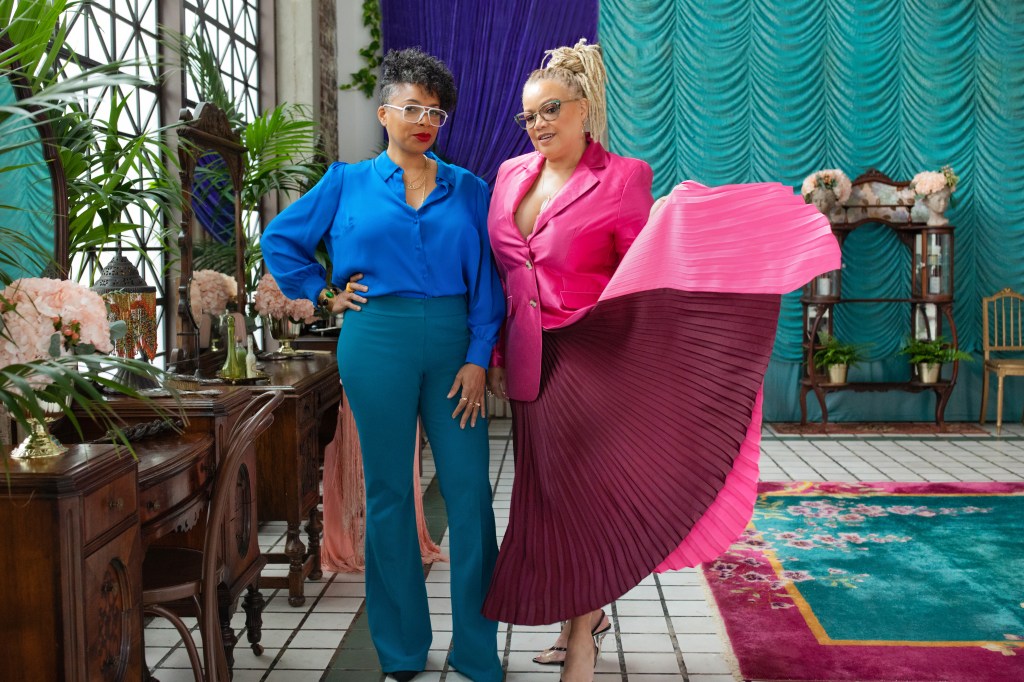 How did you know you could tell such an expansive story in just four episodes?

That was a major evolution. When Nicole [Jefferson Asher] and I sold the project to Netflix, I think we had 10 episodes in mind. We felt that there was enough material to keep it going. However, the creator and the writer’s job is to showcase what is important. What are the essential stories that move you? What’s the critical evolution, and how do you tell the personal story as well? That’s what makes it resonate. The family story was fundamental to me, and that was a big part of her life.

Considering Madam C.J. Walker’s loved ones, the cast came together so beautifully. How involved were you with the casting process?

Nicole and I talked to Octavia early on, before we were even at Netflix. We had a conversation, and she wanted to come on board. I didn’t know that Tiffany [Haddish] had independently wanted to do this project. It felt like a very natural and positive coming together. Blair [Underwood] was our revelation. He was just so perfect for C.J., and we figured, this is the guy. It was something everyone agreed on. Bill [Bellamy] was a unanimous decision too. I think that there was a lot of synergy in our casting process.

I think in some ways we don’t like to admit some of the problems that are within our race and community because there are more significant problems. However, we have to be willing to look at it to see how absurd it is, to fix it, and begin to evolve. We have to be able to look at where we’ve come from and how complex that has been. Booker T. Washington was like Obama. He was a star during that era, but he dismissed her. She refused to cower because she had something to say. We wanted to know where she got that force of will. Her vision was awe-inspiring. How did she ever imagine that she could go up against him like that? 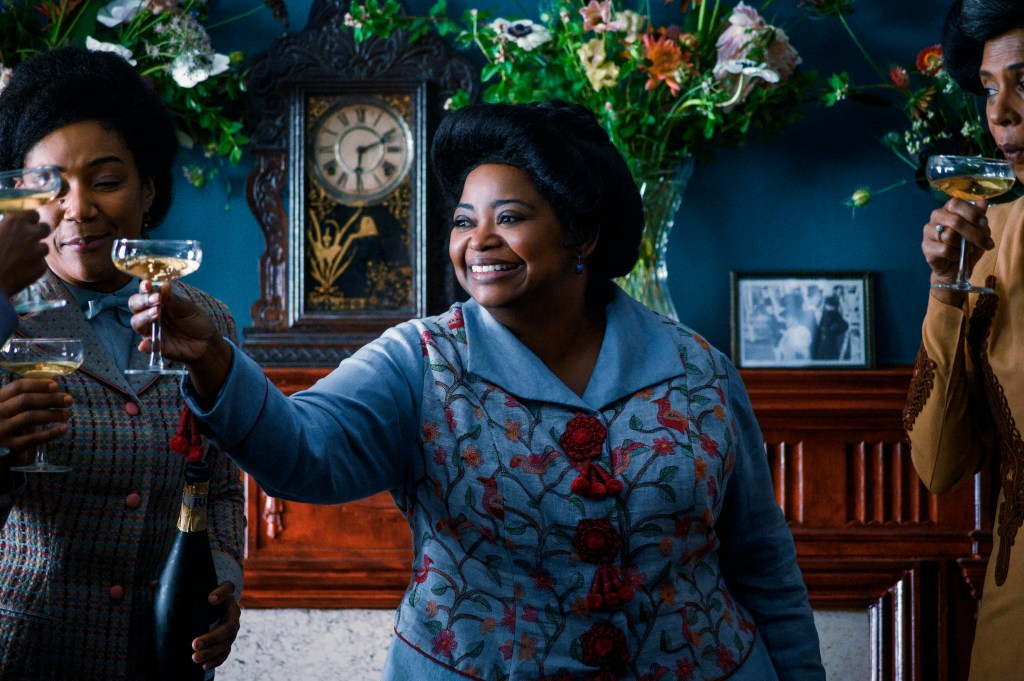 Watching Madam C.J. Walker’s relationship with Addie Munroe deteriorate was gut-wrenching. Why did you choose to illustrate colorism in this way?

Addie had a certain vision of who could sell her product. She’s thinking, “It’s me that is selling the product. Yes, I have a good product, but I’m using the illusion of myself and good hair, as a way of selling. This is my tool.” So when she looks at Sarah [Madame C.J. Walker], it’s like, “No, she is all wrong. That would never work.” That was her mindset. She leans into that “mulatto thing.” That’s why it’s so great when Sarah calls her on it. She says, “Your mama and grandma were raped.” She says it just like that. It’s an illusion that is very important historically. People have said horrible things to people with darker skin, especially in the early part of the century. We knew we needed to be willing to look at that history while appreciating Sarah’s self-empowerment. She ultimately puts her face on her products.

Though Self Made is a wholly modern story in terms of its production, the series constantly reminds the viewer of the lynching epidemic of the era and how near it was to the antebellum period. Was that deliberate?

I think it’s important for any historical story. You want to ground it in the events of the time, and how it affected people. However, I’ve always said that Black people didn’t spend all their time thinking about white people. You couldn’t. We had our own hierarchies in our own communities and our own personal problems and our own family troubles. However, that outside influence was there, that was the world that we were living in. I think it’s super important to put it into context without letting the context overtake the story. Amid all of this, Madam C.J. Walker was trying to build a dream and an empire, and she did.