Grammy Award-winning musician T-Pain has collaborated with fast-food franchise Moe’s Southwest Grill to add some extra flair to their Tex-Mex menu. As a creative, he worked closely with the brand to help develop a campaign introducing new, limited-time, menu items for consumers who are fans of flavor and spice.  For T-Pain, working with the company was an easy choice, not only for financial benefits but also for his freedom to personalize the collaboration.

“The fact that they were okay with me doing what I do and me being my own person and then actually bring in some of my personality into the ads and stuff like that… it’s a lot, you know, mostly money (laughs),” he said to VIBE during our Zoom audio interview.

“Some of their choices were mad corny (laughs). I needed to weigh in on some stuff, and we came to a compromise. I did some of my stuff and they did some of their stuff.”

The Florida-bred singer also shared how the campaign took him slightly outside of his comfort zone. Between him and his wife Amber Najm, she takes the food-lover crown.  Venturing out and trying new foods is typically done on her agenda, especially due to his needing to sometimes participate in a healthier lifestyle.

Dreamville Fest Embodied Blackness Like Few Other Music Festivals Can 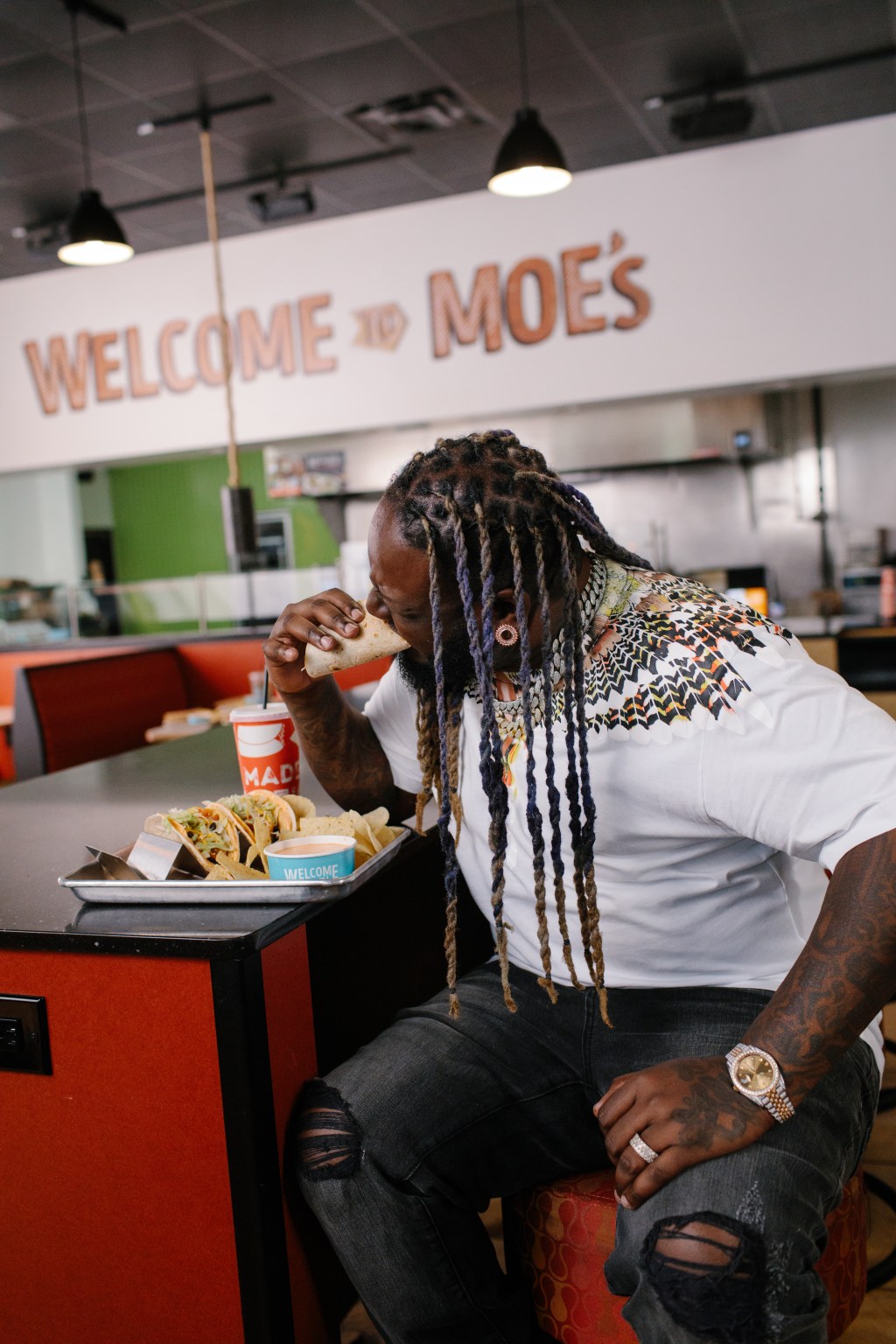 As for T-Pain, he enjoys eating simple foods with flavor and ease. The singer detailed how he appreciates southwestern style food because it is tasty without complex presentations and ingredients. It is another reason he fit the campaign with Moe’s Southwest Grill, where his favorite thing to do is turn the menu items into burritos.

“I’m one of them people that kind of change all the menu items. I kind of turn things into burritos. I try to ask for certain versions of tacos in a burrito form. It’s easier to eat,” T-Pain says matter-of-factly. “I’m gonna see if I can make this new taco into a burrito. All the pieces are always there for a burrito. They have everything you need to make a burrito. I don’t know if they’ll do it for everybody, but I know when I go in there (laughs) I make everything into a burrito. That’s my Moe’s secret menu item.”

His affection for Mexican dishes and south-of-the-border-inspired food was recognized by Moe’s when the fast-food restaurant selected T-pain for the campaign.

“In addition to being an award-winning artist, T-Pain is also a self-proclaimed taco connoisseur, so partnering with him to launch our new Frank’s RedHot® Buffalo Queso Taco was a natural fit,” said Jenny Williams, Vice President of Marketing at Moe’s Southwest Grill in a provided statement.

The 35-year-old singer also shared details on his creative endeavors outside of the campaign. A podcast, a mixology book, which he says contains a recipe for a cup of Hennessy, (1 part cup, 7 parts Hennessy), new artists, and of course, new music. The recently launched Nappy Boy Radio podcast has given T-Pain the opportunity to host the conversations of his dreams.

“The thing that really sparked it off is when… you know I’m always in my studio with my friends and we’re just talking and talking and talking. Every time we finished our conversations it’s, god-da*n it, we should have recorded that,“ he states jokingly, but very serious.

“The most favorite part about this moment is being able to link up with legends, like DJ Quik, Meta World Peace, Mike Tyson, and just like shoot the sh*t. I don’t [do] interviews. I do, you know, conversations, we just chill. We literally just shoot the sh*t. We just kick it around the table.” T-Pain goes on to mention the setting even more. “My wife is a certified bartender, [and] she makes the drinks for the whole thing. She makes whoever the guest is their own special drink named after them…my favorite part of the whole thing is getting to do that with real legends.”

The new menu items launched with the T-Pain’s assistance were developed by Moe’s to include Frank’s Red Hot sauce, a buffalo queso taco, and the option to add it to other items on their customizable menu. Loyal customers using the app have the opportunity to grab the queso on July 6. The new choices open up to all guests on July 9, and available to order through September 5.

Check out a video from the campaign below: