Decades before the Exonerated Five became one of the biggest-known examples of Black and brown youth being targeted and falsely convicted, there were the Scottsboro Boys. The group of nine black teenagers, ranging from ages 13 to 19, were wrongly convicted of raping two white women on a freight train in 1931.

Haywood Patterson, Clarence Norris, Charlie Weems, brothers Andrew and Leroy “Roy” Wright, Olin Montgomery (who was nearly blind), Eugene Williams, Ozie Powell, and Willie Roberson (who suffered from severe syphilis and could barely walk) were arrested on rape charges, which began a years-long battle for freedom. Four of the nine teens knew each other prior to being falsely accused and convicted.

The angry posse headed to a nearby sheriff where they claimed that they had been attacked by Black passengers. Police intern arrested every Black passenger on the train for assault. Meanwhile, two white women on the train, Victoria Price and Ruby Bates, told police that they had been raped by the Black teens. It’s suspected that the women lied out of fear of being arrested for prostitution. A doctor later examined the women and determined that they were not raped.

Nonetheless, police arrested the teen, who were dubbed the Scottsboro Boys. Price and Bates went to the Scottsboro Jail and identified the teens as their attackers. In the age of Jim Crow and overt racism permeating through the South, the Scottsoboro Boys never stood a chance. White lynch mobs marched to the jail where they were being held and demanded that the boys be released into their custody so that they could kill them. As a result, the National Guard was called in to escort the Scottsboro Boys from jail to court. The boys were not allowed to consult with an attorney and were instead appointed two lawyers, one of whom was 69-year-old Milo Moody, who hadn’t tried a murder case in years. A second lawyer assigned to the case was a real estate attorney.

The first round of trials took place over the course of one day in a standing-room only court room with all-white, all-male jurors. Black jurors had been systematically blocked from the jury pools through disenfranchisement that also stripped many Blacks of the right to vote.

Patterson was tried separately, followed by Norris and Weems. The defense offered no closing arguments, but prosecutors closed by urging jurors to sentence the boys to death. Within two hours of deliberation, the jury returned a guilty verdict against Norris and Weems, amid cheers and applause in the court room. Patterson’s trial began as jurors were deliberating the case against Norris and Weems. Despite having no evidence and conflicting stories from Price and Bates, Patterson was convicted and sentenced to the electric chair. Powell, Roberson, Williams, Montgomery and Andy Wright’s trial began minutes after Patterson’s trial ended. The jury quickly convicted them and sentenced them to death.

Prosecutors decided that 13-year-old Roy Wright was too young for the death penalty. Within hours, the case was declared a mistrial as jurors were deadlocked on sentencing for Roy Wright, although they all agreed that he was guilty, despite him being innocent.

The other eight Scottsboro Boys were sentenced to death, but the Alabama Supreme Court issued a last-minute indefinite stay of execution. The case caught the attention of the International Labor Defense, and the NAACP.

On March 24, 1932, the Alabama Supreme Court upheld the convictions against seven of the Scottsboro Boys, and granted Williams a new trial. The case made it to the U.S. Supreme Court later that year. In a landmark decision, the high court ruled that the boys had been denied the right to a fair trial under the 14th Amendment, and sent the cases back to the lower court.

The Scottsboro Boys were tried again, this time in Decatur, Ala., which was roughly 50 miles from Scottsboro, but still in Ku Klux Klan territory. The ILD appealed the case and hired defense attorney Samuel Leibowitz. Bates recanted her rape story and agreed to testify on behalf of the defense. Despite Bates’ cooperation, and no evidence proving their guilt, the Scottsboro Boys were convicted again, though Patterson’s death sentence was suspended.

In a unanimous decision, the Alabama Supreme Court denied the defense’s motions for a new trial, and in January 1935, the case returned to the U.S. Supreme Court for a second time. The guilty verdict against Norris was overturned and new trials were ordered for him and Patterson. Norris’ third trial ended in another conviction and death sentence along with Weems and Andy Wright. Roy Wright spent six years in prison while the case was tried several times.

Prosecutors eventually agreed to drop the rape charges against Powell, who was later convicted of assaulting a deputy sheriff and sentenced to 20 years. The remaining rape charges were also dropped against Montgomery, Roberson, Williams and Roy Wright, and they were released from custody. 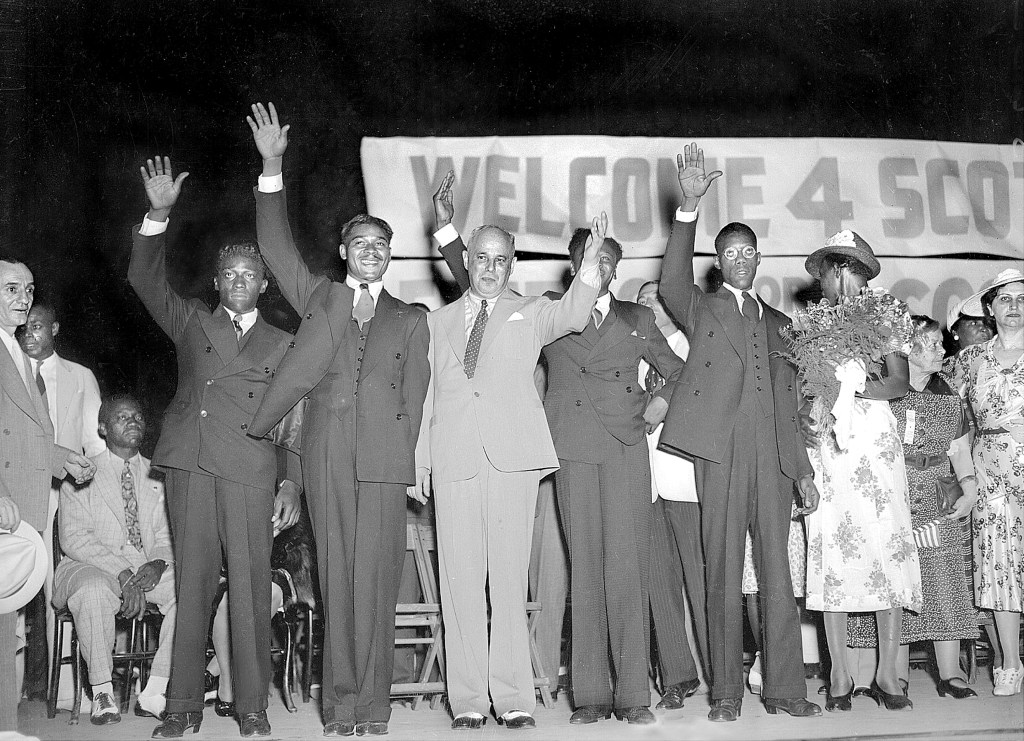 Enduring back-to-back trials took a tole on the group that likely had a ripple effect on their lives. One of the accused was left disabled after being shot while being escorted to prison. Others returned to custody on various convictions over the years. Norris, the eldest and the last surviving among the bunch, evaded parole in 1946 and went into hiding for 30 years. He was found in 1976, and pardoned by Alabama Gov. George Wallace. Norris died in 1989.

After more than 80 years, the Scottsboro Boys were posthumously pardoned in 2013. See more on the story in the video below.