We’re five days away from the release of Jay-Z’s 12th solo album, Magna Carta Holy Grail. Well, for Samsung Galaxy users at least. Instant Internet rips of the project are sure to come immediately after the first 1 million Galaxy users download their copy—everyone else will have to wait until July 4 to purchase one of the most anticipated rap albums of the summer.

First teased during the 2013 NBA finals through a Samsung commercial, the quick snippets of Hov recording tracks with the likes of Swizz Beatz, Pharrell, Timbaland and Rick Rubin sent hip-hop fans into a complete frenzy. During a recent interview in support of his new partnership with Monster, Swizzy talked to VIBE about the importance of Jay’z forthcoming opus.

“Jay is just ahead of the times. I’ve been working with Jay for 17 years now—which is crazy because I’m only 34,” Swizz explains. “This album represents Jay. It’s like… how do give somebody something authentic that they can go back pull from and give them something that’s ahead of its time? I think he summed that up very well.”

He continues: [Fans] always want to go back to the classics. You always have that hunger of ‘Man, why didn’t he didn’t he just… Man, he’s supposed to…’ It’s always going to be that. For the first time in a long time I think someone solved that problem. He did that with this album. “

Swizzy says his involvement in the project wasn’t part of a carefully orchestrated plan. “Me and Jay got an ongoing working relationship, so there will be tracks here [and there]. He’ll send something. You just never really know what he’s working on,” Swizz says. “You just go to the studio one day and he’ll unfold the whole thing. Luckily, it was at my studio [Laughs].”

While several commercials have been released to promote Magna Carta Holy Grail, the Monster says everything we’ve seen were real studio sessions in real time.

“That stuff was happening for real,” Swizz tells VIBE. “People don’t understand that. What they seen on TV wasn’t no script. That was real—there just happened to be cameras rolling. We was vibing like that for real. Timb had his drum machine and I had my drum machine. We have more footage I just wish Jay would let us put it out. It was like that for a lot of those sessions. The vibe was great.”

The veteran producer wouldn’t reveal exactly which tracks he worked on, but praised Jay for being a leader. “I didn’t do as much as I could if done but sometimes less is more. [This album] just means that we’re all on the right track of forward thinking. To see him do it ‘I’m like OK he gets it.’ A lot of people don’t get it—they’re just so used to following the same train. So for Jay to take his power and create his own train—I think it was genius. That’s something I would love to do.”

As far as Billboard’s stance on not counting Hov’s first million sales purchased by Samsung, Swizz says it’s not even a concern to Roc Nation mogul.

“He was being innovative. Some people—they can’t relate to innovation. It’s his album [so] he can do what he wants to do. He’s earned the rights to do whatever he wants to do. He’s put enough time into this game with Billboard and any other outlet. He’s his own boss and there’s a reason why he did it that way.” 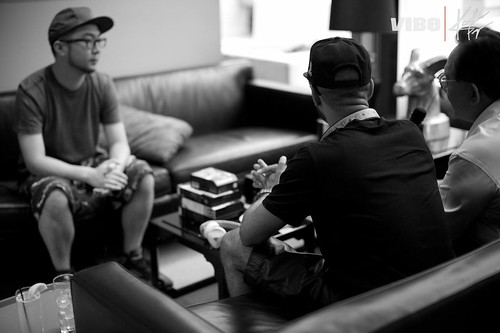