From Black Don’t Crack being “a black Golden Girls” to JuVee Productions permitting black writers to create freely, Viola Davis opens up about her work’s intentions.

Viola Davis’ skin exists as its own separate being. Her body, deep Hershey’s chocolate in tone, is framed by a stark white fitted pencil dress, cobalt sweater and matching pumps she’ll later remove to hobble into the press room barefoot to scoop up portobello mushroom sandwiches and free lotion samples (“Don’t look at my feet!” she jokes). Her cheeks, perked and rosy from a morning spent smiling, shimmer and glow beneath the sweep of delicately placed highlighter. “No lie, I teared up after staring at her skin,” an awestruck beauty editor, a woman constantly exposed to naturally and cosmetically flawless skin for a living, confesses to me later. “It was just so beautiful.”

It’s true; there is something different about Davis’ skin, and a charm about how she sees the world through it and acts accordingly. As much as I-don’t-see-color narratives try to bulldoze conversations about identity, skin still means so much. It is the first thing someone sees when they look at a person—before the smile, before the eyes, before the personality, before the achievements, before the struggles. A stranger’s first point of judgement, our skin holds the weight of history and the things that both bind and separate our humanity.

There’s something beguiling about the way the Oscar, Emmy and Tony Award-winning behemoth—she is the first African American to receive the Triple Crown of Acting—walks in her abundant melanin with confidence, using it as the internal compass for her life’s work. These days, Viola Davis doesn’t just casually stroll through the world with that rich skin of hers. She radiates.

Falling in love with her own was a gradual process, though. When I ask her to pinpoint her defining moment of infatuation, she crosses her arms and leans back into the velvet blue couch of Waldorf Astoria Beverly Hills’ ritzy suite. “That’s a good question. First?” she asks, rarely at a loss for words.

It was life post-Juilliard School, the prestigious performing arts conservatory, that she says ushered in the beginning of her skin-deep self-love. At the time, Davis was just shy of 30. “I don’t know what it was about actually leaving grad school and that intensive training which is so much about—at the time, it’s not like that now—negating my individuality, fitting into these roles that had been performed so many times before and trying to fit into whatever their understanding of these characters were. It’s about just negating myself. These very classical… very white training. It wasn’t until after I left there that I grew into myself. It was like being set free from prison,” she says.

Today, at 52, Davis is in her prime, sitting at the upper echelon of not just black Hollywood, but Hollywood in general. Aside from snatching lace fronts as Annalise Keating on ABC’s How to Get Away With Murder and anchoring feature films like Fences and The Help, she also serves as an ambassador for Vaseline’s newest product, Intensive Care Cocoa Radiant Smoothing Body Butter (which coincidentally includes 100 percent cocoa and shea butter, two staple skincare products amongst black women). A.K.A., the living, breathing embodiment of “black don’t crack.” 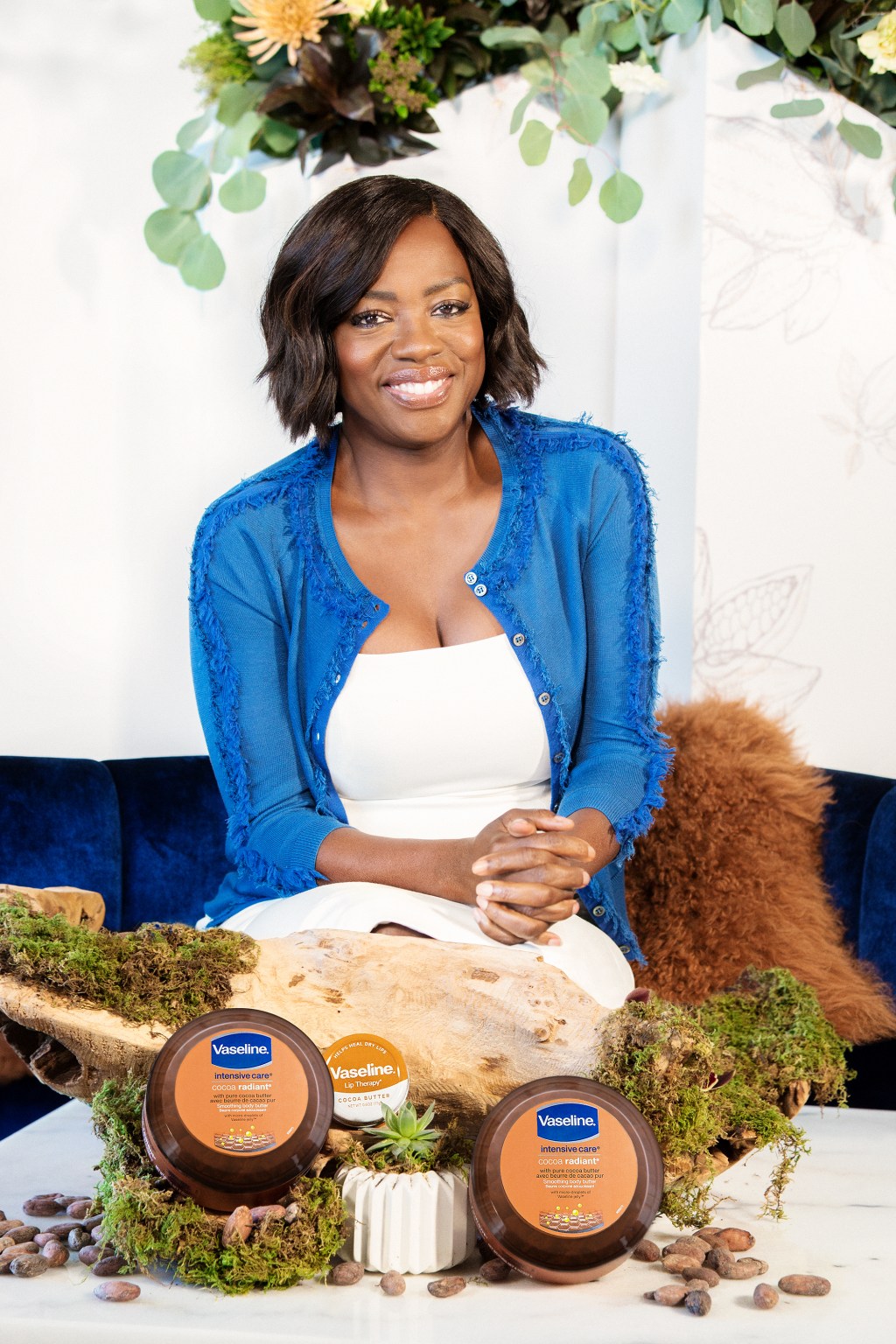 “It’s something positive,” she says of the phrase summarizing black people’s ageless wonder, “because I think that in the African-American community, we’ve held so many negative images. ‘You’re always incarcerated. You’re not as smart. You’re not as pretty. You’re not as articulate. You’re all poor. You’re all on welfare.’ We carry so many negative stigmas and stereotypes that within that, whenever we find something positive, we embrace it. It’s like yeah, but we don’t age! Black don’t crack! When anything is placed on our beauty and recognizes our beauty, I love it.” This, she says, is the impetus behind her joint project of the same name with Larry Wilmore.

“This project is about women of a certain age,” she says. “You could fall off the map a little bit when you’re 40-50, especially in this business. People feel that way. I don’t feel that way, but a lot of people feel that way, especially with black women. We don’t have a black Judi Dench who’s making movies, and Vanessa Redgrave, Meryl Streep. Just black women of that age besides the Phylicia Rashads or Cicily Tysons who are leading movies. So we wanted to serve an underserved audience with Black Don’t Crack.”

I want those artists of color who are out there, who have any kind of story to tell, who put pen to paper and they write anything of note… I’m honoring that voice. —Viola Davis

JuVee Productions, which launched in 2012, has been particularly booked and busy this year. Davis and Tennon made headlines time and time again for developments beneath their professional umbrella. At the top of the year, the couple set out to raise $250 million to expand the television and digital brand for development, production, and distribution. JuVee released “Emerging Artist Series,” a five-part web series highlighting a variety of up-and-coming creatives in entertainment, back in May.

The duo are wrapping production on a Tony Kushner-written biopic about Texas Congresswoman Barbara Jordan—the first Southern African-American woman elected to the U.S. House of Representatives—which is a story they’d been eyeing since the company’s inception. Viola Davis will reportedly star in the biopic, just like she’ll star in The Personal History of Rachel DuPree, another JuVee project, alongside Mahershala Ali and Quvenzhané Wallis.

The company is also partnering with EveryWhere Studios to adapt Rachel Lloyd’s Girls Like Us: Fighting for a World Where Girls Are Not for Sale, the autobiographical novel about falling victim to and escaping the world of commercial sex exploitation, into a movie. Most recently, Davis has been plucked to star in (and co-produce) Universal Pictures’ adaptation of Terry McMillan’s novel, I Almost Forgot About You. Malcolm D. Lee, the man at the helm of Girls Trip, will direct the film. She will not only claim the role of Georgia Young, a successful optometrist, and two-time divorcee, but the movie will be co-produced through, you guessed it, JuVee Productions. Boss moves indeed.

Davis and her husband’s work seems to build on the gleaming exultation she made from the 2017 Academy Awards stage after winning Best Supporting Actress for Fences: “People ask me all the time—what kind of stories do you want to tell, Viola? And I say exhume those bodies. Exhume those stories.”

Exhume Those Bodies: Remembering 21 Of The Most Influential Women Artists In The Last Century

“Listen, I want those artists of color who are out there, any of them who are out there, who have any kind of story to tell, who put pen to paper and they write anything of note, I’m honoring that voice,” Davis says now. “I don’t want to squelch that imagination. I don’t think that every story that’s worth telling makes it into a history book. It didn’t stop Arthur Miller from writing Death of a Salesman, from writing [A] View from the Bridge, and he just wrote about your common everyday man. It doesn’t stop John Patrick Shanley. It does not stop Kenneth Lonergan, who wrote Manchester by the Sea, who has written several stories just about your average regular Joe. That’s how I feel about us. I feel the kings and queens are my mom, are my dad. It’s like August Wilson said, and it’s how he writes with all of his characters. That’s my intention.”

Tennon agrees, considering JuVee as a voice for the voiceless. “For us, everything is about inclusion,” he told Deadline from Cannes Film Festival this year. “We know that these talented people exist, but opportunity is really sparse. So while we are not trying to change the industry, what we want to effect is a change so that there’s more doors opening.”

In the African-American community, we’ve held so many negative images … Whenever we find something positive, we embrace it. It’s like yeah, but we don’t age! Black don’t crack. —Viola Davis

But how do you scout these stories, I ask, acknowledging the staggering amount of material out there. Davis insists that JuVee is easy to get to since it’s still a burgeoning company and that the writers simply come to them. “They send us scripts and we read them,” she says, matter-of-factly. “We read all of them religiously and if it’s great, if it’s worth telling, we do it. But I don’t want there to be a gag order on the artist of color’s imagination, and I feel now sometimes it’s about just telling this story as a great image and a great message, and ‘What have they done?’”

Davis recalls the time she played Vera in August Wilson’s Seven Guitars in 1996. The fictitious play, set in the 1940s, followed the rocky professional journey of Floyd “Schoolboy” Barton, a Blues singer just released from jail. When she did a talkback with the audience afterward, she was disappointed in some of the responses.

“One of the men in the audience said, ‘Why are you telling this story? Who cares about this guy? Who was he? Did he make it into a history book? Why didn’t you do a story about B.B. King?’” she recalls. “I was so offended by that because you’re saying that he doesn’t matter. You’re saying that his life doesn’t matter, and you would never do that with Willie Loman in Death of a Salesman. You would look at that play and say, ‘I see my dad. I see his value. I’m sitting with his pathology.’ I want our production company to be a reflection of that because I want us to be honored.”