Rodney Reed, a death row inmate in Livingston, Texas, who was scheduled to be executed by lethal injection on Nov. 20, had his execution stayed by the Texas Court of Appeals for 120 days after new evidence was found by the Innocence Project. The court also ruled to consider the newfound evidence.

Reed has been on death row for the past 21 years. In 1996, he was convicted of the rape and murder of Stacy Stites, a woman he was having a sexual relationship with in Bishop, Texas.

According to the Innocence Project, Texas is on the “verge of executing an innocent man.” The Innocence Project cited contradicting confessions and evidence that suggests Stites’ fiancé, Jimmy Fennell who was a local police officer, is the prime suspect in her murder.

The Innocence Project, along with Reed’s attorneys, filed an application for clemency with the Texas Board of Pardons and Paroles on Oct. 30 after witness Arthur Snow signed an affidavit.

Snow, who’s a former member of the Aryan Brotherhood and prison mate of Fennell at the Stevenson Unit in Cuero in 2010, claims the officer admitted to killing his fiancée.

The affidavit also states that Fennell came to Snow to ask for protection from the white supremacist prison gang.

Snow said Fennell frequently spoke of his fiancée with “a lot of hatred and resentment” because she was having an affair with a black man before later confessing, “I had to kill my ni**erloving fiancée.”

Fennell was serving time for rape at the Texas prison when he allegedly made the confession.

Another sworn affidavit from former fellow Bastrop Sheriff’s Officer Charles Wayne Fletcher claims that Fennell said he believed Stites was “f**king a ni**er.” Fletcher also described that Fennell acted”cold, empty and emotionless” at Stites’ funeral. “I was so disturbed by his behavior that it caused me to question whether he was involved in Stacey’s death,” Fletcher said.

Family and supporters of Reed have worked hard to attain his freedom. A Change.org petition asking to halt the execution garnered more than 100,000 signatures. Supporters also protested outside the Capitol building in Austin, Texas, asking Gov. Greg Abbott to show clemency for Reed, who many believe is innocent.

Abbott also faced pressure from entertainers to halt Reed’s execution. Kim Kardashian, who has become an advocate for prison reform,tweeted to her 62 million followers: “Please @GovAbbott How can you execute a man when since his trial, substantial evidence that would exonerate Rodney Reed has come forward and even implicates the other person of interest. I URGE YOU TO DO THE RIGHT THING.”

PLEASE @GovAbbott How can you execute a man when since his trial, substantial evidence that would exonerate Rodney Reed has come forward and even implicates the other person of interest. I URGE YOU TO DO THE RIGHT THING.

If Reed is granted a new trial and found not guilty, he’ll join a growing list of minorities wrongly convicted of heinous crimes including the exonerated Central Park Five, and Walter McMillian, whose story is being depicted in the forthcoming film, Just Mercy, starring Jamie Foxx and Michael B. Jordan.

VIBE compiled a list of black men and women wrongly convicted of crimes, and later exonerated.

Ed Johnson
In 1906, Ed Johnson was arrested and convicted of assaulting a white woman in Chattanooga, Tenn. According to the Ed Johnson Project, the woman was knocked unconscious with a leather strap. After a witness claimed that he saw Johnson carrying a leather strap, Johnson was convicted by an all-white jury and sentenced to death. When the U.S. Supreme Court granted a stay of execution, a white mob broke through the jail and murdered Johnson by hanging him. In Feb. 2000, Johnson’s case was posthumously overturned.

The Scottsboro Boys
Many scholars argue that the Scottsboro Boys sparked the Civil Rights movement. In 1931, a fight broke out on a Scottsboro, Ala., train between black and white boys. After the melee, police arrested the nine black boys, who ranged from 12 to 19 years old. Two white girls later alleged that they were raped on the train.

After four separate trials, each lasting one day, eight of the nine black boys were convicted of rape and sentened to death. It took 20 years for the men to get a retrial. One of the rape victims testifed that the rape was fabricated, however an all-white jury returned guilty verdicts. After multiple re-trials, all of the Scottsboro Boys had their convictions dropped or were sentenced to lesser charges. Then in 2013, the Alabama legislature introduced a bill that posthumously exonerated the Scottsboro Boys.

Ed Brown, Arthur Ellington, and Henry Shields: Brown Vs. Mississippi
In 1934 Kemper County, Miss.,, a white farmer was killed. Three black sharecroppers were arrested for the crime. After being beaten and tortured into confessing, an all-white jury convicted Brown, Ellington and Shields and sentenced them to death.

In 1936, the U.S. Supreme Court overturned their convictions, stating that coerced confessions cannot hold-up in court. This historic ruling led the way to the Miranda rulings that came decades later. However, Brown, Ellington and Shields were never fully exonerated because they took short plea deals out of fear of facing another trial.

Lena Baker
In 1945, the state of Georgia executed Lena Baker for killing a white man who kidnapped and assaulted her. Baker claimed that she shot the white man in self-defense, however, Baker was convicted and became the only woman to ever be executed by electrocution in Georgia.

In 2005, Georgia Board of Pardons and Paroles granted Baker a pardon saying that the state made a grievous error. 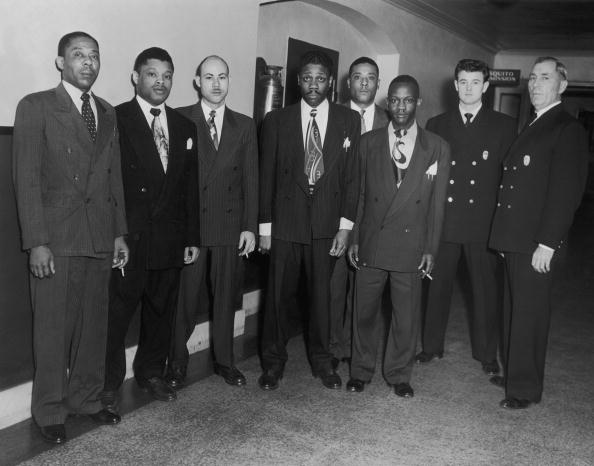 The Trenton Six
Known as the Scottsboro Boys of the North, the Trenton Six were arrested in 1948 for the killing of a white furniture store owner in Trenton, NJ. Witnesses described the culprits as “two to four black men” to “two to four light-skinned teenagers.”

The six black men who were arrested did not match the descriptions. Five of the Trenton Six signed inconsistent confessions, which they maintained at trial were coerced. Despite solid alibis, the six men were convicted and sentenced to death.

On appeal, their convictions were overturned due to perjury of the medical examiner. After several re-trials, four of the Trenton Six were acquitted, and two were found guilty of lesser charges.

Geronimo Pratt
The late Black Panther Party member, Geronimo Pratt, was sentenced in 1970 for allegedly murdering a 27-year-old elementary school teacher. Pratt spent 27 years behind bars, and maintained his innocence throughout his incarceration.

His sentence was eventually vacated on June 10, 1997, after lawyers discovered that the prosecution had concealed evidence that might have exonerated Pratt.

In Robeson County, North Carolina, McCollum and Brown, who were both intellectually disabled, confessed to the murder after being pressured by police. There was no physical evidence tying the brothers to the crime.

In 2010, the North Carolina Innocence Inquiry Commission agreed to investigate the case. They found that the DNA from a cigarette butt found at the scene of the crime belonged to Roscoe Artis, who was currently serving a death sentence for raping and killing an 18-year-old woman.

After serving 31 years in prison, McCollum and Brown were exonerated in 2014. In 2015, the brothers were pardoned by the governor of North Carolina and received $750,000 each in compensation from the state.

Glenn Ford
In 2014, Glenn Ford was exonerated after spending 30 years on death row in Louisiana.

Ford’s lawyers discovered that the state’s witnesses’ statements were false and misleading. Lawyers also found that police lied to the jury about what Ford said to them. All of this was made evident after hidden police reports included tips from informants that implicated other suspects, where one of the suspects admitted to being the killer.

In 1984, Ford was convicted and sentenced to die for the Nov. 5, 1983 death of Shreveport, La., jeweler Isadore Rozeman.

Marty Stroud III, who served as the lead prosecutor in Ford’s trial, wrote a letter apologizing for his role in Ford’s conviction. Stroud also called for the abolition of the death penalty.

“In 1984, I was 33 years old. I was arrogant, judgmental, narcissistic and very full of myself. I was not as interested in justice as I was in winning,” Stroud wrote in a letter that went viral. Ford died less than 16 months after his conviction was overturned. He was only 65.