SPOILERS AHEAD: This op-ed contains spoilers from the series finale of Insecure and the behind-the-scenes documentary, Insecure: The End.

Sunday (Dec. 26) marked the end of HBO’s groundbreaking, conversation-sparking cultural reset, Insecure. As we break down the series finale and its accompanying documentary, Insecure: The End, here’s what we loved, hated, questioned, and will ultimately miss as we say goodbye.

For starters, after years of us begging the show’s creator, Issa Rae, and showrunner, Prentice Penny, for hour-long episodes—which was never going to happen for the half-hour comedy— we were gifted with a nearly 41-minute episode to conclude the treasured series.

Vulture shared, “initially, the episode was a girls’ trip to Morocco for Issa and Molly five years into the future; instead, it evolved into a zip through time punctuated by birthdays, weddings, and pregnancy announcements—big life moments encapsulating the nature of friendship in your 30s.”

The final season began with a reunion. Issa’s closest relationships weren’t solid, and after finding common ground with her best friend, Molly, she decided to break up with Lawrence (again) following their perfect reunion during Season 4, episode 8, “Lowkey Happy.”

Fast forward to Lawrence admitting in the penultimate episode of the series that it’s always been Issa for him in front of her current boyfriend, Nathan. The men get into a scuffle, and in the next episode, the finale, Nathan chooses to end the relationship due to its toxicity. Issa wakes up the next day declaring, “I just wanna fast forward to the part of my life when everything’s okay,” sparking a series of time jumps in to various birthday celebrations. As promised, the core friend group do their best to honor a commitment made earlier in the season, but as life would have it, it’s not always possible.

While we see moments that we may have predicted like the aforementioned breakup, a lot is rushed through and glossed over. Molly’s mother dying was overshadowed by the rapid transition into Lawrence’s birthday. Kelli declares that she is in love and is pregnant, but we never see what that actually looks like for her. We get no insight into Molly’s grieving process. We don’t get to witness how the group reacted to Molly’s engagement or see how Lawrence finally proposed. We don’t get the candid discourse regarding Tiffany and Derek’s decision to have another baby or dive deeper into the blossoming relationship between Issa and her stepson.

We do get what is essentially “Lowkey Happy, Part II,” in which Issa and Lawrence ultimately decide to get back together. Sorry to those who wanted Issa to choose herself, but she also did in a way. The decision only has to make sense to her, and like Jay Ellis revealed on Twitter, “It was always her. The love story some of y’all loved and some of y’all loved to hate. #IssaLaw”

In Insecure: The End, co-executive producer, Laura Kittrell shared, “Last year once we did the episode where Lawrence and Issa have the whole night together, we basically wrote an episode about how they’re soulmates. And so, by the time we get to this season, it’s like we’ve told the world that they’re soulmates, so they have to end up together or we’re basically saying that the protagonist of our show doesn’t deserver to be with her soulmate. So, I think there ultimately was no other way to end the show.”

Funny enough, Issa Rae herself wasn’t sold on the notion of them reuniting. In an interview, she shared, “In Mirror Issa’s words, I thought she was being a dumb b***h. I didn’t think it was gonna work. As the season progressed, I started to unpack what that meant and why they could not work it out if this is what she wanted. And I realized deep down that I did want them to be together. In thinking about the series as a whole, and about the growth that they’ve experienced and the love they do have for each other, and thinking again about my own life, I felt like she would try it out. She would give it a solid chance. This is her person.”

However, the best part about Insecure is its layered portrayal of the Black experience especially in terms of relationships. Lawrence isn’t Issa’s only soulmate; Molly is also her person. These women have come a long way over the course of the series, specifically regarding their explosive Season 4 fallout, but they grew individually and collectively. As friendships evolve and get tested through your 20s and 30s, these two took their highs and lows in stride. That is sisterhood. That is love. That is why Yvonne and Issa’s real life friendship showcased itself on-screen during their final scene together. “Thank you for everything. Just for being you. Loving me while I was me. And, girl, I don’t know where life is gonna take us, but as long as you’re around, Imma be okay,” Yvonne tearfully shared as Molly before embracing a very emotional Issa.

The real love story is Issa And Molly. Black women being dope as fuck and thriving in the face of anything is what we are really watching. #InsecureHBO 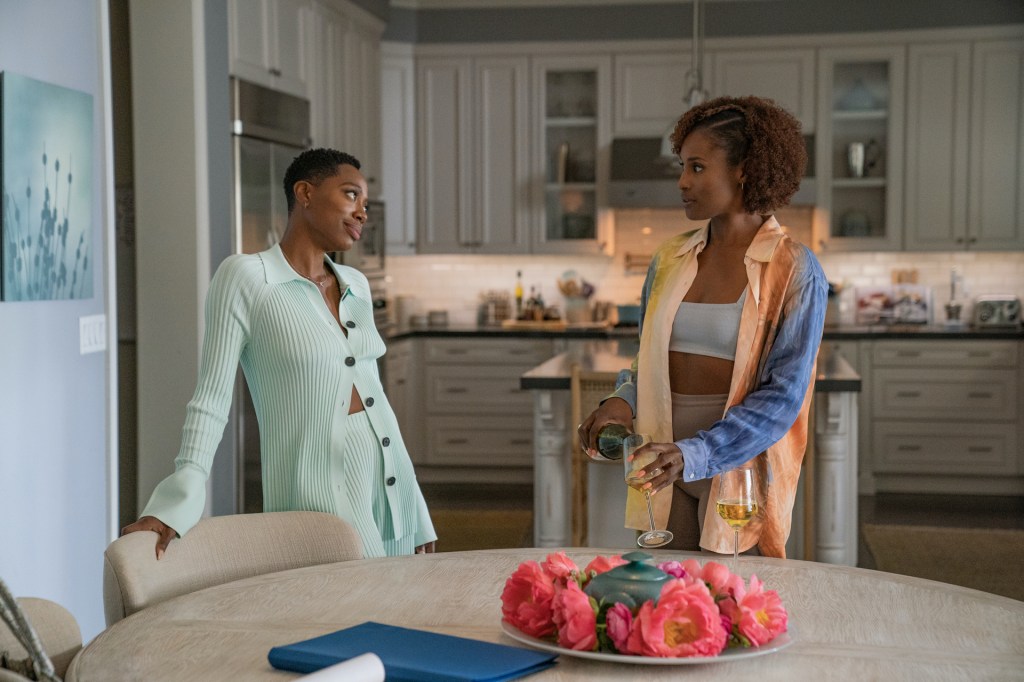 Within the documentary, we learn more about the intentionality and divinity when it came to bringing the show to life and putting together its crew. Penny made it a point to build community with key crew members through weekly happy hours and social events like attending Disneyland as a team. Head writer and co-executive producer, Amy Aniobi, said, “We did things that made us feel like friends and it just made us better at our jobs because we were open and sharing and just giving ourselves to the content.”

Many others also spoke to the safeness and freedom they felt being part of the Insecure crew. Felicia Leatherwood, Issa’s hair stylist, admitted that no hairstyle was planned. She considers each legendary style to a “creation between [her] and Issa.”

Moreover, the Hoorae team is all about diversity and upward mobility. “When it comes to giving people chances, people will show you that they’re ready and I just love passionate people. I love to be around who love to do the work, who are about it,” Rae shared.

Syreeta Singleton went from Showrunner’s Assistant/Writer’s PA on Season 1 to showrunner for Hoorae’s forthcoming series, Rap Sh*t. Kindsey Young won an “Insecure On Set” contest in 2016 where she was rewarded with a move to LA and a job on the show as a set PA. Young continued to remind Issa and others that she was a writer and was asked by Rae herself to become a Writer’s Assistant. “Across the board, you really do see growth,” says Deniese Davis, co-executive producer.

“That is a true testament to their legacy and the legacy of the show is that we always, always tried to open many doors for as many people as possible,” Prentice Penny stated.

Insecure is the current show that people reference when pitching new series. Though dissected in a real-time way, unlike its predecessors—Living Single, Girlfriends, etc.— it is a cultural reset that will continue to be discussed. Everything will be, okay?!