One of Mexico’s Hollywood-friendly beach towns got some action this weekend with the third annual Baja Beach Festival. From Friday, Aug. 16 to Saturday, Aug. 17, the serene beach just under an hour from San Diego transformed into a paradise for urbano music stans. With the weather clocking in at mid-60 to mid-70 degrees, the end of summer breeze blew just hard enough for attendees to throw their inhibitions to the wind. An idyll of booty cheeks, bikinis, and Tecate beer guzzlers, the outdoor venue that boasted one main stage was not only ideal for those who wanted to take a dip in the ocean then plop on the sand to indulge in live entertainment but also for those who caught the performances from the balconies of the adjacent hotels.

The line-up mirrored a well-curated playlist of today’s popular Latin trap and reggaeton acts. Singer Cazzu brought her Club Emo Tour to Mexico, evoking bad girl vibes. She could slow down the tempo for a sensual love note à la “Toda” — she appeared on the remix for the song from fellow Baja Beach performer Alex Rose — or body roll to a sexy number like “Puedo Ser.” R&B-leaning artists like the Brytiago (Night 1) and aforementioned Rose (Night 2) present as rappers on-stage with fitted hats and tees, designer gear and iced out jewelry but croon for a woman’s adoration. Ear-pleasing entries like Brytiago’s “Bipolar” and “La Mentira” as well as Rose’s “Darte” (which borrows the melody from Akon’s explicit “I Wanna Love You”) and contribution to Lunay and Baja Beach Fest act Lyanno’s “A Solas.” Reggaeton duo Jowell y Randy brought classic reggaeton feels with “Un Poco Loca,” which samples Chaka Demus & Pliers’s “Murder She Wrote” while also reviving eternal party-starters like Casa De Leones’ 2007 debut single “No Te Veo.” 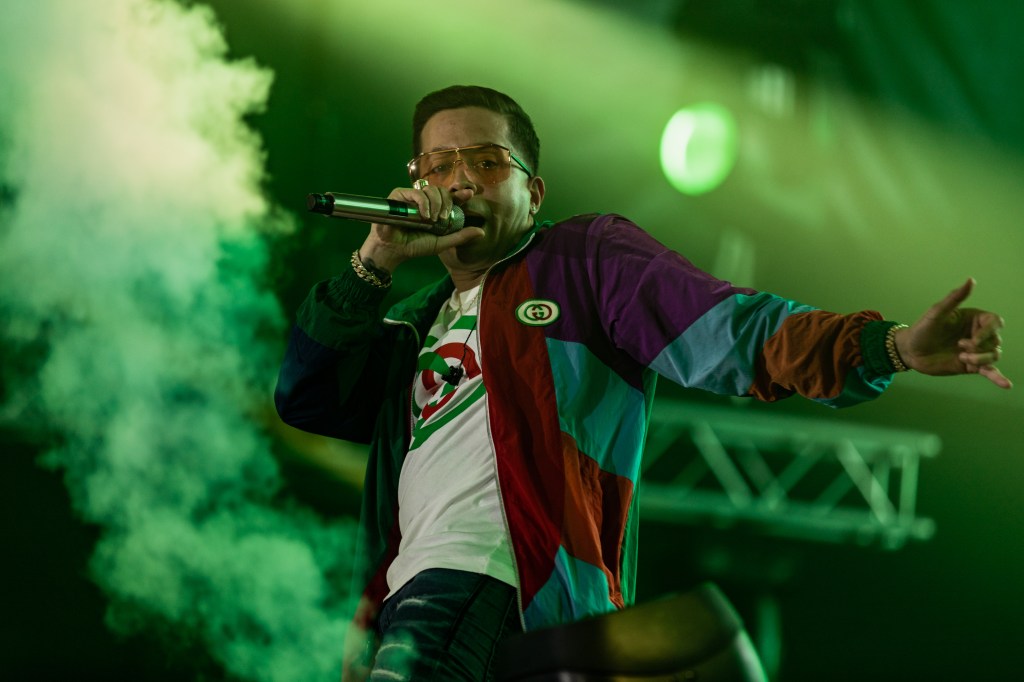 Despite missing Cardi B — who canceled a string of shows recently — the star power for both nights was not dimmed. J Balvin performed an hour’s worth of material that anyone who owns a streaming service account would know. The Balvin fiesta came with dancing figures like life-sized clouds, mushrooms, and colorful creatures including a Cookie Monster-esque octopus. There was no territory he didn’t cover on the music front either. He sprinkled in gems from the Bad Bunny joint project Oasis and collaborative tracks like “Con Altura” (which features Anita) and “Loco Contigo” (which includes DJ Snake and Tyga). After their earlier set, Jowell y Randy appeared for “Bonita” during J Balvin’s set. He then hyped up the late-night crowd with infectious mainstream hits like “Machika,” a Cardi B-less “I Like It” fused with Pete Rodriguez’s original “I Like It Like That” and the explosive finale “Mi Gente.”

The main event came with Ozuna. The 30,000 in attendance clung to every canción, from “Vaina Loca” to the Romeo Santos-assisted songs “Ibiza” and “El Farsante.” His solo rendition of “La Modelo” and the megahit “Dile Que Tu Me Quieres” had the hot girls — and boys — singing every word. “Baila Baila Baila” was an immediate call-to-action for twerking on the beach while the closing number “Taki Taki” preceded a nearly three-minute fireworks show, a fitting nod to Friday’s explosive performances. 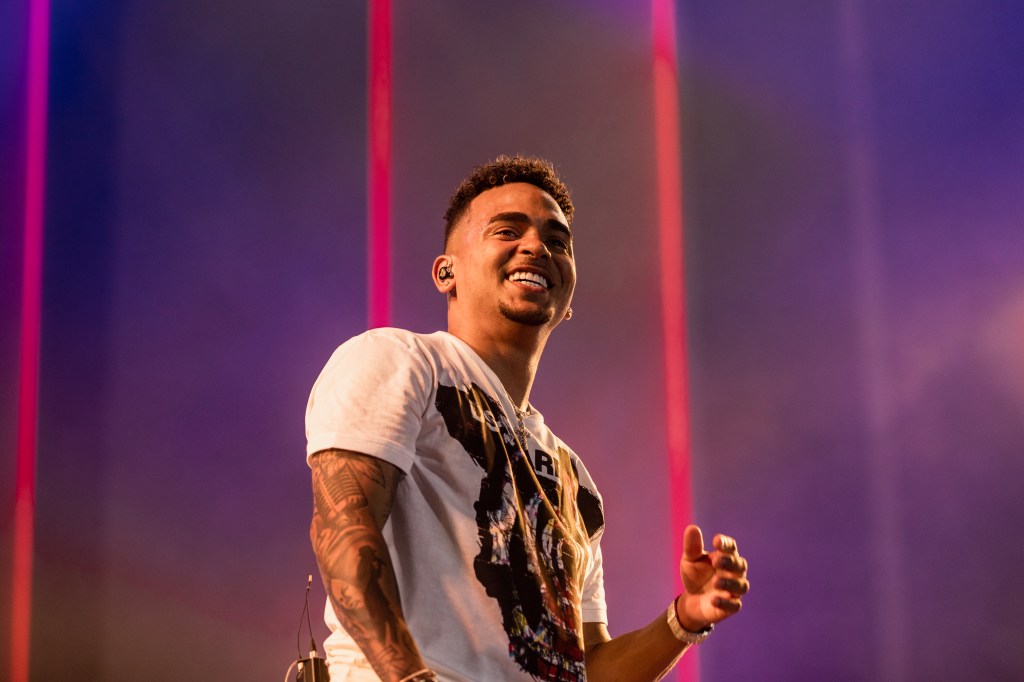 Following a night of afterparties that rang off in las calles till 4 a.m., Saturday was still loaded with vibras. To set Day 2 off, daytime acts like Amenazzy and Lyanno provided a melodic yet nostalgic buffet of their catalog’s finest. Amenazzy performed a track that borrowed the beat to Rich Gang, Young Thug and Rich Homie Quan’s “Lifestyle” while Puerto Rico’s own Lyanno brought “Se Cansó,” the Urba y Roma and Zion y Lennox-assisted “Te Veo” and “Dejarte Llevar,” which samples Mario’s “Let Me Love You.”

After an intermission of line dancing to Caballe Dorado’s “No Rompas Más (Mi Pobre Corazón)” (Billy Ray Cyrus’ “Achy Breaky Heart” morphed into a Spanish language hit), De La Ghetto stormed the stage with his latest release “Selfie,” the Nicky Jam collabo “Si Tú No Estás” and his verse on the “Escápate Conmigo” remix, an ideal soundtrack for lovers and lovers-for-the-night alike. He transitioned into a semi-bar fest by performing his solo take on Drake’s “Started From The Bottom” with “Estamos Aqui,” a track with Arcangel (the reggaeton artist De La Ghetto formed a duo with in the early aughts) and in a sense, an appropriate slogan for the sold-out crowd in attendance.

Now, full stop for Becky G. The fiery Chicana who hails from both Mexico and Inglewood, Calif. represented her two cultures with pride, telling the crowd in Spanglish, “I lived my life in between two worlds, representing two flags, y siempre me dijeron, ‘You’re either too Mexican for the Americans or too American for the Mexicans. You can’t be in the middle.’” But Becky G showed and proved she can keep the same energy for her peoples, bringing some hip-hop flavor to her crossover joints like “Mad Love” (which features David Guetta and Sean Paul) and the playful Anitta collabo “Banana” while dishing out Spanish-language songs like “Mala Mía” (Maluma and Anitta are on the original), “Que Me Baile,” the Myke Towers duet “Dollar” and the celestial love note “Cuando Te Besé.” Based on the hometown love she received from an audience that included her parents and siblings, claro que si, Becky G nailed it. 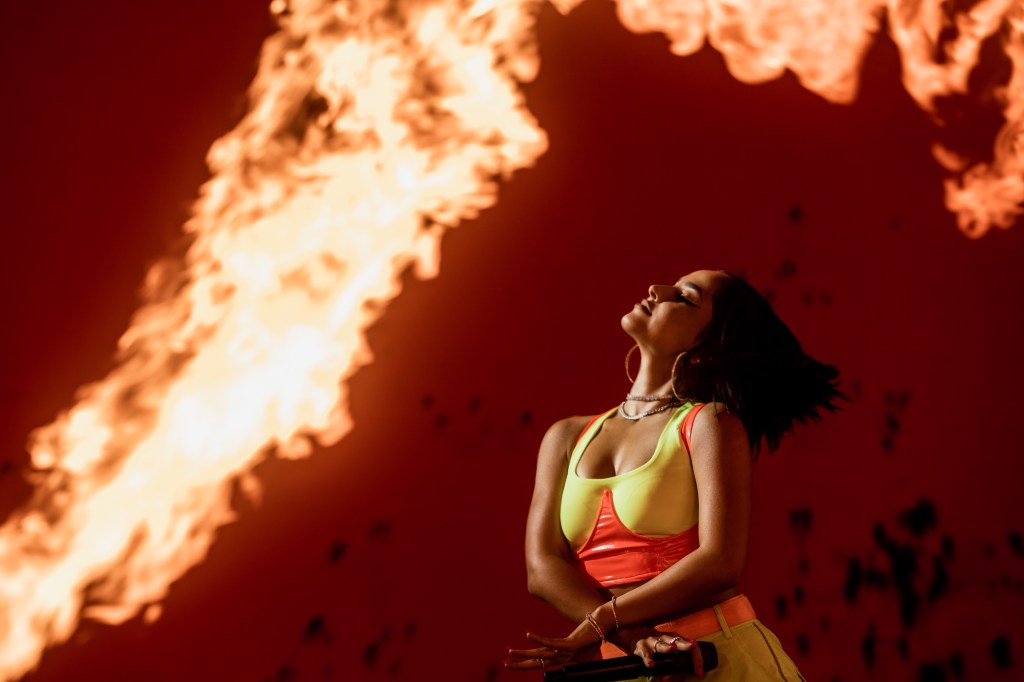 The roar of the crowd reached a fever pitch when one of the seasoned reggaetoneros, Nicky Jam, arrived. With the breadth of his catalog packed with, you guessed it, jams, the puertoriqueno effortlessly segued from his recent offerings (“El Amante,” “Si Tú La Ves” and the Silvestre Dangond’s wedding day-ready “Cásate Conmigo”) to the hits that cemented his reggaeton reign (2003’s “Me Voy Pal Party” and 2005’s “La Gata” which follows the same cadence as P!nk’s 2000 debut single “There You Go”). Nicky Jam then unleashed “X,” a continuation of J Balvin’s Night 1 performance of the Will Smith-co-signed single.

To note, it wasn’t uncommon to hear the same song performed by multiple acts. Rosarito was treated to three different verses of Nio García, Darrell and Casper Mágico’s 2017 smash “Te Boté” from Ozuna, Nicky Jam and Bad Bunny, who each appeared on the remix released in 2018. Same happened for J Balvin, who performed his parts in “La Canción” and “I Like It” on Night 1, followed by Bad Bunny, who delivered his share of the same tracks on the consecutive night.

To set the mood for Bad Bunny, Mexico’s own DJ Fredy Fresco dabbled in some hip-hop by spinning City Girls “Act Up” and a festival favorite, YG’s “Go Loko.” For context, the warm-up felt intentional as Bad Bunny’s melodic swagger and rap sensibilities have boosted his crossover appeal. Cue the summer smash “Mía,” which features a Spanish-speaking Drake (Sadly, the 6 God was M.I.A. for the live rendition in Baja California), and definite crowd-pleaser. Still, the eccentric 25-year-old — laced in a red tracksuit and his signature shades — delivered other cuts across the spectrum from the high-octane banger “200 MPH” to the subdued “Solamente Soy Feliz.” The YouTube phenom’s reach was palpable: for every track he performed, it sounded like his fans printed out the lyrics for a sing-along. He then brought el fuego (literally firing up the flame machines) for “La Romana” before bowing out with “Callaita,” a perfect send-off for Baja Beach Fest with this lyric alone: Si hay sol, hay playa.

Cardi B Doesn't Give A F**k, And Neither Should You: Cover Story