Ever since Paula Patton and Robin Thicke announced their separation after 20+ years of dating, he’s been working tirelessly to win her back. The Baggage Claim actress had enough of his single man actions and demanded a divorce, but he believes it’s not too late to fix his past mistakes. It’s recently reported that despite their separation, she’s even considering reconciliation since seeing improvement in his dedication annd increased interaction with their son, Julian.

Instead of partying for his birthday (Mar. 10), Robin should continue fighting for the the best present of all– his wife. Here’s a list of 10 things he can do to win her back.

We know she’s his muse and now it’s time to show and prove. Instead of announcing at each show he messed up, he should pen his faults and apologies with a chart-topper. Paula hearing that song played on the radio enough will have her giving him a second chance.

He should remind her why they got together in the first place. He has fond memories of snagging the actress, so he should work on recreating those teen moments.

They were together pre-paparazzi era, so we know they have a one-of-a-kind photo vault. He should find a few of the most sentimental and loving pics and put a photo gallery of their timeless love together.

It’s rumored that Jay Z bought Beyonce an island to mark their fifth wedding anniversary so Robin should follow suit and give her a small island to vacation on.

What better way to celebrate how much you love someone then renewing your vows? He should pen his own heartfelt speech to serenade the love of his life.

Nothing says I’m sorry than a pricey commitment. He should update their prenup to include a money payout to her if he ever cheats or gets divorced due to faults on his part. Money always talks.

We know Paula has a cover wish list because what celeb doesn’t? He should pitch her to all her favorite ones in hopes to land her, her dream spot and gift her with that once in a lifetime opportunity.

Getting a symbolic tattoo of your love is the new trend in Hollywood. He should pull an Ocho Cinco and apologize through this permanent mark.

Known for Iyanla: Fix My Life series, she’s gotten to the heart of the issue with some of the most notorious troubled celebs and the singer is now officially troubled. 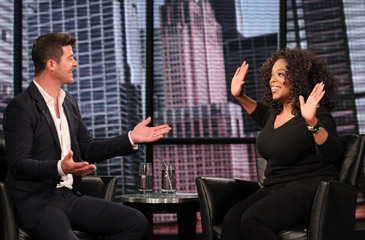 He already had a sit-down with the mogul, but if he’s going to make it to Paula’s ‘Next Chapter,’ he should urge the network to give him another chance. If Oprah approves, he might get that second go around with his wife.