Typically, the prototype of a man-especially on Valentine’s Day– is an adonis. Tall, handsome, and in impossibly good shape, what society considers the perfect specimen usually resembles something only the best screenwriter can invent. Furthermore, they’re emotionally available, swimming in disposable income and an indescribable lover. In short, he’s everything you probably haven’t had; in fact: this fantasy is the opposite of most men you’ve encountered on your journey to adulthood.

In the ever evolving world of hip hop, the rapper remains the unattainable for “normal” girls everywhere. They’re famous, flossed out, swimming in cash and usually surrounded by women: they have to be perfect, right?

Today, emcees are trading in fairytales for cautionary ones with news of cheating, divorce and children born out of wedlock. The line between fantasy and reality has been drawn and most stand behind the latter. And we like it that way, especially when reflected in music like J. Cole’s.

The Dreamville rep’s penchant for reality raps have transformed him into a new kind of hearthrob; the kind whose imperfections bring him strangely closer to perfection. Sure, there are gold plaques on his wall, but our favorite Carolina boy knows the ins and outs of struggle, from dodging Sallie Mae calls to making rent and of course: all interaction with the opposite sex.

Last year, Cole kicked off V-Day with “Power Trip,” a story of obsession, and one year later, the “born sinner” comes full circle with “She Knows,” a song about the battle between a relationship and temptation. The visuals, starring Best Man Holiday‘s Harold Perrineau and  the stunning Rochelle Aytes (Crazy, Sexy, Cool: The TLC Story), put a surprising spin on the Amber Coffman-assisted track and continue to showcase Cole’s love for storytelling.

Get into the just-released visuals above and keep reading for 12 reasons J. Cole is the perfect Valentine.

Related Article: Songs That Will Make You a J. Cole Fan [Video]

“I got a dollar and dream that’s all a n*gga got and if you bout that dream then I’m all up in your spot.”
–Dollar and a Dream III
“I went to St. Johns, I coulda went to Julliard. Cause my beautiful mind mixed with my musical bond”
-Omen
N*gga moved to NYC, b*tch. Got a record deal and a college degree, b*tch”
-TKO Remix

Women want nothing more than a hard working man to call their own and J Cole screams ambition through a multitude of lyrics. Whether it be his college education or determination to make it in the rap game; J Cole’s words are a major turn on to women. 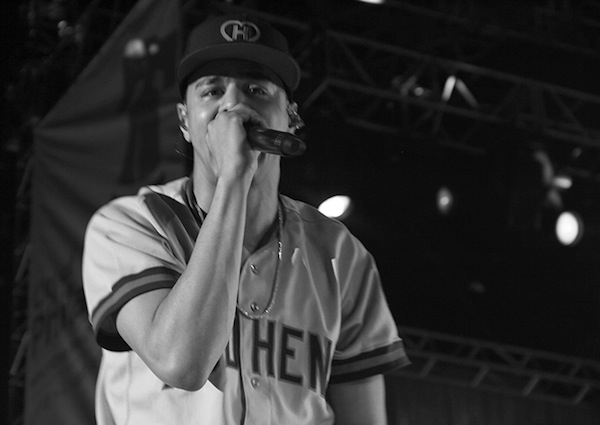 Not a Fan of Uneducated Women

“But you see the sad thing f*ckin’ with her is
Is the chick ain’t even have brains, dummy like a b*tch
So I tried to show her about the world and about just who we really are
And where we’ve come and how we still have to go really far
Like “baby, look at how we live broke on the boulevard”
But all she ever want me to do is unhook her bra”
-Lights Please

“Lights Please” is an ode to women that aren’t intellectual and think the only thing riding for them is their sex. Even though he’s taken, we appreciate Cole’s ability to encourage the ladies to take a long, hard look at themselves.

“To all the women with the flaws, know it’s hard my darling. You wonder why you’re lonely and your man’s not calling
You keep falling victim cause you’re insecure. And when I tell you that you’re beautiful you can’t be sure
Cause he don’t seem to want you back and it’s got you asking. So all you see is what you lacking, not what you packing
Take it from a man that loves what you got. And baby girl you’re a star, don’t let ’em tell you you’re not”
-Crooked Smile

He wrote an entire song about embracing your imperfections in addition to his own.  A man openly saying he loves you just the way you are is an automatic heartthrob in our book.

“Ay Sallie, I know I ain’t been answering your calls
But sh*t, let me explain- it’s because times been hard
Been running around trying find a job
I hear my phone ringing in the morning, 9 o’clock
And it’s you, can’t even front I press ignore”
-Dollar and a Dream II

Like many of us, he’s still dealing with Sallie Mae. It’s nice to know a rapper isn’t just flossing, but has real bills to pay.  Dealing with this loan company is easier when set to good music.

He Wants to Help His Guys Out

“And so I write this for my n*ggas on the corner
Love you cause you my brother so I feel I got to warn ya
This sh*t ain’t set up for a young brother to advance
On that note, you n*ggas playing right into their hands
Damn, better get yourself some goals, you n*ggas better dream
I know the hood raised you but it’s bigger better things”
-Losing My Balance

Most of us either know, date(d), or lost a man to the corner. Cole’s passionate raps about reaching the hustlers and helping them change their ways for the better is always appealing.

“This sample was yellin’ “loop me!”, Ms. Hill please don’t sue me
Cause I ain’t one of these rappers out here frontin’ like he got it, n*gga
I ain’t f*ckin’ got it, n*gga…
Throwing thousands in the strip club with Drizzy
Difference is I’m throwing four, he’s throwing fifty
Lord, forgive me”
-Cole Summer

We love a man who endorses budgeting. The entertainment industry is a world where men love to flaunt what they have,  but we’ll always take a guy that understands his finances.

“If i had one wish, I would f*ck Tia and Tamera, at the same time
And put name tags on they titties so I don’t get they name wrong”
-Cole Summer
“I’m artistic, you n*ggas is autistic, retarded”
-Jodeci Freestyle

He understands that as an artist, you have to be held accountable for your actions. Instead of being insensitive to how others may perceive his work, he takes blame when necessary. After rapping about autism in “Jodeci Freestyle” and having sex with Tia and Tamera Mowry in “Cole Summer,” the Roc Nation signee swiftly made amends with those he offended.

He Loves the Real

“Your hair and your nails just as phony as your smile
Fake eyelashes, you drew your eyebrows
It make a brother ask, do you pride yourself?
Your make up like a mask, tryna hide yourself
It seems on the outside, you thinking you the sh*t
But there’s a soul that’s inside that you don’t even knew exist”
-Losing My Balance

Finally, a rapper who raps about wanting a girl without a “beat” face and calls out those that fake the funk to snag a man.  A man that loves a woman’s natural beauty and wants her to have a beautiful soul is the Valentine we’d love.

He Speaks on Realities of Abortion

A life grows inside, and now he asking “Is it even mine?”
What if this b*tch ain’t even pregnant, dog, could she be lying?
And she be crying cause he acting distant
Like “Ever since I told you this, n*gga you acting different”
-Lost Ones

Pregnancy is scary and a lot of us have had to deal with it either first hand or through the eyes of others. “Lost Ones” keeps it painfully honest about a situation between a man and woman who aren’t married.

“Even back then when I was up there in Mohammed crib
Paying 1700 for the rent, money well spent
No heater, but a n—- made heat, may I vent”
-Power Trip
“The 15th of the month and I’m just now paying Mohammed
Said the rent’s due on the first
But he don’t know the s— I been through and it hurts”
-‘Shook Ones’ Freestyle

Many may not know this, but Mohammed was Cole’s real NYC landlord and continued to believe in his dreams even when J’s pockets were empty.

“Ducking calls from my mother for days
Sometimes she hate the way she raised me but she love what she raised
Can’t wait to hand her these house keys with nothing to say”
-Born Sinner
“They got me thinking bout my mom though
Man I can’t wait to sing this song I be like, I be like
…We ain’t gotta worry bout the money no more
We ain’t gotta worry bout how them bill get paid
We ain’t gotta worry how the meals get fed”
-2Face
“But I finally put my Momma in that E class, n*gga
And I told her quit her job, but hold your horses
If my next album flops it’s back to the post office, both of us, sh*t
They’re saying that’s a real possibility
The thought alone is killing me”
-Cole Summer

There are a select few mama’s boy verses we can tolerate and J Cole is one of them.  A man that wants to provide for the woman who sacrificed for him is a keeper.

He Encourages Self Love

“Love yourself, girl, or nobody will.
Oh, you a woman? I don’t know how you deal.
With all the pressure to look impressive and go out in heels. I feel for you.
Killing yourself to find a man that’ll kill for you.
You wake up, put makeup on.
Stare in the mirror but its clear that you can’t face what’s wrong.
No need to fix what God already put his paint brush on.
Your roommate yelling, ‘Why you gotta take so long?'”

While he can’t always relate to our problems, he always reminds women that he feels for them. Some men refer to us as b*tches or hoes, but J. Cole just wants us to love ourselves.

Trying to Treat His Girl Right

We aren’t sure if he wrote this song directly to his girl, but “Love Me Not” speaks volumes. He knows he’s not treating his girl right and she’s sticking with him through it all.