Rihanna has plenty to toast to on her birthday. At just 26 years old, she has achieved a legacy that many before and after her will never reach. She parties hard, styles right, sings raunchy and reaps all the rewards she’s set up for herself. The road to the good life wasn’t always easy for the Bajan beauty, but her attitude and talent helped her achieve her self-proclaimed bad gal status.

This label doesn’t just come from the many beefs she’s accumulated–and there’s plenty–but also her ability to stay on top of the music charts.

Weed isn’t all-the-way legal yet, but that doesn’t stop her from sparking up. Known for her love of marijuana, she started the trend that many new artists are getting lit with.

Rihanna came out with her own lipstick, ‘Ruby Woo’ for Mac and the line sold out so fast they had to relaunch it. She’s since furthered her line and it continues to do numbers everyday.

“Strip Clubs and dollar bills, I still got my money” isn’t just Rih Rih’s lyrics, it’s her lifestyle. The singer has no problem tricking out strippers and her pockets are never fazed by the dent she leaves. 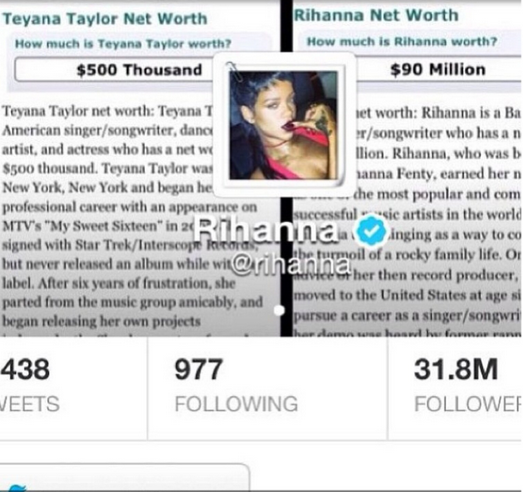 We can’t keep up with all the celeb beefs Rihanna has had throughout her career because it seems she’s either playing target practice or dodging jabs. Regardless of the amount, she always seems victorious–then again, when your net worth out ranks your competitors, it seems there’s no real competition at all.

Many journalists voice their opinion against the Bajan songstress, but rarely any ruffle her feathers. Elizabeth Ann Jones unfortunately became the object of ridicule when she tried to put Rih Rih in her place. Not only was her letter against the singer very opinionated, but the bad gal ripped her a new one with her IG response.

Robyn Fenty has quite a bit of lawsuits against her, but what celeb doesn’t? Like her music, she reigns supreme in most of them from her Topshop battle to her recent victor against a former accountant.

On top off all her accolades, she made history last year as the artist with the most number 1 songs on the Billboard Pop Charts,  beating out her bestie Katy Perry who has 10.

If Rihanna wasn’t a singer, she’d have a lucrative career as a stylist being that whatever she wears becomes an automatic trend. Her fashion line River Island isn’t too shabby either, with many styles on our wardrobe wish list.

It’s no secret that the two aren’t fans of one another. Between openly boasting on her IG about stealing Chris back to having Kae removed from clubs, the bad gal is making sure Chrae understand she still reigns supreme.

What male or female celeb isn’t crushing over Rihanna? The gorgeous boss has men professing their love for her in interviews and on national TV.

It wasn’t when she dated Chris Brown or when they had their explosive incident that told us she was a bad gal. It was when she slammed critics for bashing her backpedaling to her abuser. Granted we didn’t agree with her choice due to the circumstances, but she made it clear it was her decision to make for herself and if you cared so much– well f*ck you.

If you haven’t had Rihanna on the cover of your magazine, it’s because she chose not to be. She’s made her rounds on just about all the best mags–especially Vixen–and is going for her 3rd and 4th appearances on some. The Bajan beauty has become a poster child for creating iconic glossy pages.

We aren’t sure if Halloween is her favorite holiday, but she sure knows how to slay effortlessly for the day’s festivities. Each year, she reconfirms why she’s such a bad gal.

Thanks to Rihanna, Chris and Drake had their epic bottle throwing fight that shut down a club and sent a few to the hospital. If you have the ability to make men fight over you in the club as if they’re not worth millions, you’re definitely a bad girl.

She may not be an actual Carter, but she gets their respect. The Roc Nation money maker has Jay Z, Beyonce and Blue Ivy in her call log and she’s not even in her prime yet.

Just about all of us would love to sit on Oprah’s couch andRihanna has already done it. She also was featured before Beyonce on Oprah’s Next Chapter–pretty badass.

Nicki Minaj, Katy Perry, Shakira, Cara Delvignes–just to name a few–have become #WCW for tons of Instagram users every Wednesday. And all of these celebs have either shared a bed, steamy scene, lip locked or more with Rih.

Admit it: when 4/20 comes around, we’re as committed to stalking the singer’s every move as we are to celebrating the unofficial holiday.

We’ve lost count on how many tattoos Rihanna is sporting, but that doesn’t stop us from loving every one of them. We aren’t sure how she does it, but whatever she inks on her skin is uber sexy.

Like her style, her hair is just as fashionable. Each do becomes trendy and we love the risk she takes.

She’s no stranger to the IG hype. Unlike other celebs, she shows her playful side as she participates in meme sharing, #MCM, #TBT and even likes pictures her “navy” posts.

As bad ass as she is, she also has an extreme sensitive side. The singer recently sent her condolences to the family of a slain fan, Thiago Sobral Valencia–  “R.I.P. To one of our fallen soldiers, brutally murdered yesterday in Brazil! 14 year old Thiago, will forever be in our hearts! #Navy,“– and even offered to pay for the funeral.

She’s also pierced. We don’t know all the places, but through revealing outfits, we know her boobs have major bling.

Rihanna’s best friend Melissa Forde is a major rider. The two have each other’s back through every thing from her beefs to her accomplishments. It’s nice to see a celeb be so devoted to her friendship, especially when it’s a non-celeb. It reminds us that money doesn’t change everything.

We’ve seen her sexual and angry side, but in her latest cd the songstress expressed her pain. Being able to open up about the good and bad defines a bad gal.