Fresh from a nearly fatal three-day coma stint August Alsina is back on his feet and speaking out on what got him to that scary place.

Alsina stopped by the Breakfast Club, in which he lovingly calls family and willingly spilled the tea on what his life has been like for the past two months, recovering from a coma, and being on tour with the legendary Usher. Aside from Charlamagne’s usual roundup of ridiculous questions and Angela Yee’s lip service-esque wringers, August himself blindsided us all with some less than expected answers that had us asking did he really say that.

Vixens, click next to check out the 11 craziest quotes from August Alsina’s Breakfast Club Interview.

“I don’t have a Tinder but some people I know around me have Tinder and I’ve seen Tinder come through. Not me, I think it’s really weird that you sign up to be a whore.”

August Alsina Stands On Honesty In New Single "Lied To You"

On his strenuous work ethic:

“I’m so focused that sometimes I feel like I don’t need to eat.”

On his traumatic performance:

“I thought I could make it through. When I went off and came back I knew it wasn’t looking too good. But at the same time it’s like Jordan played with the flu so why can’t I do what I have to do?”

On people speaking about his character:

On how he feels about being the topic of discussion:

“Whoever wants to be caught up in my life, first of all, you should be living yours because I’m damn sure not worried about your life.” 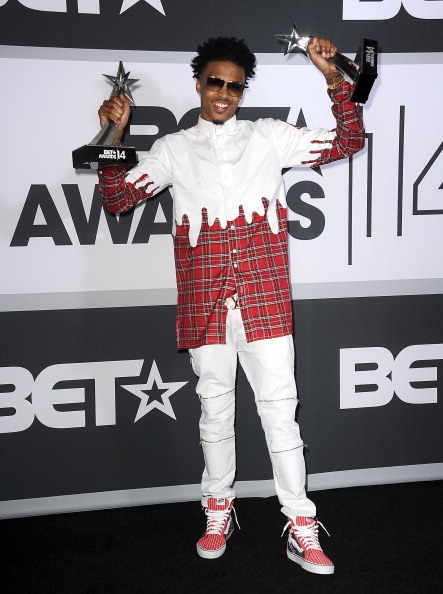 On the alleged Baller Alert groupie tale about him and his DJ:

“You not my other. This is a fling I hit it, I quit it and I’m gone. If that’s five pumps, whatever.

“It happens randomly. This d*ck ain’t for free. I guess when I do feel like I want to make someone misbehave it’s definitely in order and in a place where you’d never be able to write a story like that.”

On still not eating the box:

He still doesn’t eat the box, but he did do the deed with a girl on her cycle.

On seeing his deceased brother:

He had a spiritual moment during his coma where he saw and spoke to his deceased brother. “I knew I would be fine and wasn’t going anywhere. It showed me that there’s something bigger than us on this Earth.”

“She was the coolest person.”

On wanting a girlfriend:

Plus, ladies, August is single and ready to mingle. “I definitely want me a girlfriend because I feel like if I had me a girl, [the medical scare] that happened probably wouldn’t have happened.”