Azealia Banks may have dropped a new single this month, but the artist has garnered attention for her recent comments about R&B songbird SZA.

While the rest of the world was enjoying SZA’s effortlessly cool visuals for her single “Drew Barrymore” on Tuesday (June 20), Banks caught a glimpse of her influence. During the 1:36 mark in the Dave Meyers-directed presentation, SZA is seen in her birthday suit while rocking pink heels with a pink mesh veil and purple-pink fedora to match.

The look struck a nerve with Banks, who believed it was a clear re-do of her Slay-Z mixtape cover. “Another day, another attempt to recreate the genius that is…Azealia Banks.” the artist said in an Instagram post, with side-by-side images of herself and the singer.

She then continued to push for credit and suggested Roc Nation take her on as an A&R. It should be noted that SZA isn’t apart of Roc Nation, but of the folks over at TDE. 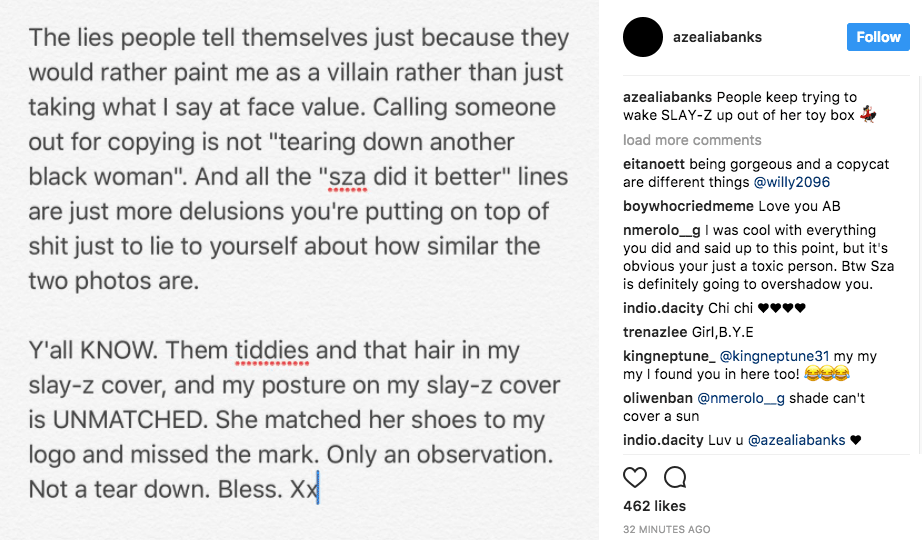 In another deleted post, Banks clears up her comments but also posts a fan account who supported her decision to call out the singer. 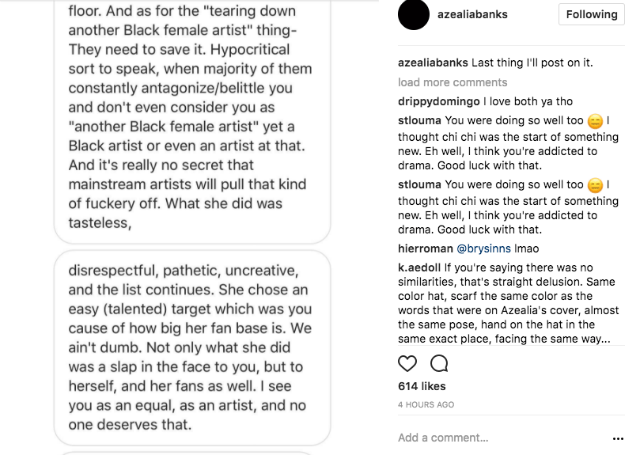 The looks don’t hold too many similarities, besides two beautiful women flaunting their bodies. Banks has found her work in plenty of artists as of late, including Beyonce’s Yoruba-inspired look at the Grammys.

There’s no denying that Banks style is one of kind, but to have it implemented in the aforementioned artists is a bit of a stretch armstrong. TDE president Terrence “Punch” Henderson also cleared up any confusion by sharing with HipHopDX the image that inspired the look. “[This is] some lady that the director found and wanted to recreate the image in the Drew Barrymore video,” he said referring to an image by photographer Mark-Meir Paluksht you can see here.

Meanwhile, SZA’s “Drew Barrymore video”–which also stars a A1 cameo by the actress herself–is sitting pretty on the YouTube Trending Charts. The singer also announced she will be performing at the this year’s BET Awards.

If you like, check out Banks’ new track, “Chi-Chi” here.