Like most millennials, the gang makes it to church after a night of hard partying. Just to be clear, it isn’t the club that has them half-sleeping in those church pews; it was The Let Out – which we all know, is where the action is. For those who don’t know, it’s basically where a whole bunch of people who don’t want to go home but don’t want to get the hell away from the club, hang out. There’s everything from food trucks to people selling drinks in styrofoam cups. You meet all types of folks, like the man who still lives in his momma’s basement, claiming he’s helping her out with the rent, or a young woman like the one Ari is spitting game to. You know, the kind of lady you could eventually take home to watch throwback movies. It’s very unpredictable.

Rocky, is livid that her night was basically wasted. Not only was it a straight club, but the deejay didn’t play her bae, Tia’s song. Apparently, the two benjis Simone slipped him wasn’t enough to get the song played. So now, Simone needs to make this right, otherwise, what good of a manager is she?

Cut to a fast-forward scene where Pastor David is preaching about the unnecessary need to be superhuman and this word clearly resonates with Simone, who’s reminiscing on her actions of the night prior. Her bright idea is to blast the song in the parking lot from her tiny car. It’s a fail, however, sis refuses to accept defeat. She is determindT.

After a failed attempt to press the deejay,  Simone enlists the help of a Dominican guy with a pimped-out ride equipped with really loud speakers.  The people are feeling Tia’s track and in an O-M-G moment of dancing, Bryson and Simone finally kiss! It was a passionate one, eventually ruined by the clear-out.

Although he’s dressed like an undercover preacher with that beige blazer on, Bryson is quick to “deny Jesus” when approached by some fine ladies. David naturally calls him out on it and is flirtily approached by a tipsy young woman named Elaine who quickly gets a sense that her nutcracker-drinking ways may be too much for this Bible study on Wednesdays-type of brother. Is this yet another “L” for David like in the Bible?” Later into The Let Out, David sees Elaine sitting alone and like the gentleman he is, offers her his blazer and assistance in catching a Lyft. (FYI: Seriously, don’t drop your pin when ordering a Lyft. They’ll definitely have you walking two blocks, squinting, and looking for hazard lights. Meanwhile, they’ve already left. Exact addy only.)

Okay now, to answer my earlier question: No,  it wasn’t an L for David because he successfully convinced Elaine to accept an invite to his 7 a.m. service. (7 o’clock?! Sheesh! And she was lit just hours before. She must really be feeling him.)

Back at church, David is preaching some serious sermon. Whew, the spirit is so moving. “You’re the underdog, the cards are stacked up against us,” he evangelizes, reminding us that “defeat is nothing but a state of mind. If we think like a loser, we will lose…..so I implore you to look up.” Can I get an “Amen”? ::insert Lauryn Hill Sister Act GIF here:: 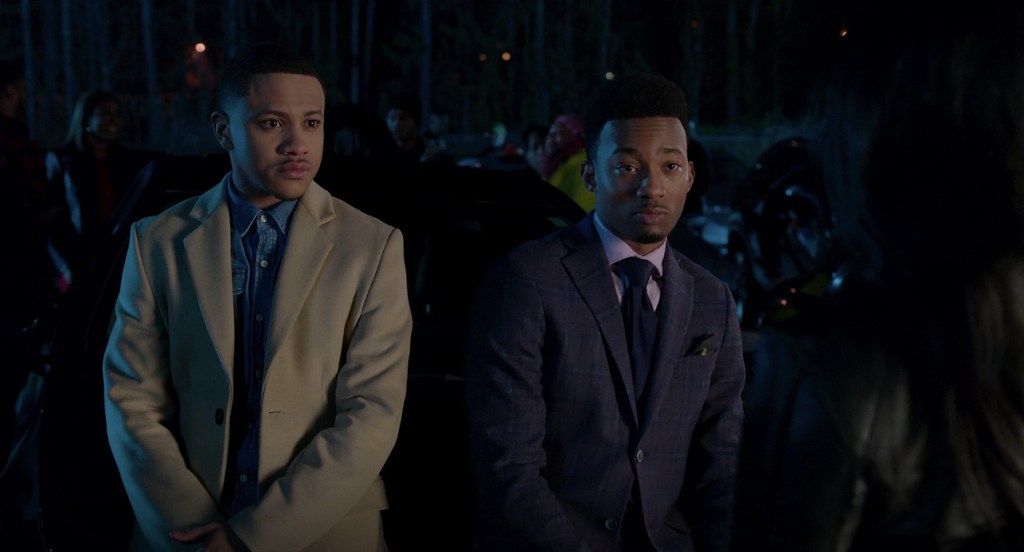 After a night where it seems everyone had a W, the only one not at the let out, Crystal is seemingly also the only one suffering from a loss. Is it possible that David has moved on? Just last week,  Crystal admitted that the reason the two of them got divorced was that they were so young and unsure. The look she gave him indicates more uncertainty, making us wonder if she feels she’s made a mistake by letting him go.

That Bry-Sim kiss though, wow. Since the beginning of the season, it seemed as if Simone was willingly ignorant to the fact that Bryson likes her. Who couldn’t tell? The man legit stares at her all of the time. In an effort to doubt others, Simone decided to stop accepting help from Bryson so people can stop claiming she uses him. This episode, she made it clear to him that she didn’t need it and proved successful on her own.

During their celebratory dance when he leaned in for the kiss that first time, she kind of dubbed him with a, well, dub but then she turned around and was feeling his energy. Sensual doesn’t begin to describe what’s going on and we can only imagine what would’ve happened had the police not rained on everyone’s parade. At the Sunday service, they didn’t sit next to one another, but they didn’t avoid eye-contact with one another, either. Could it be that Bryson is finally getting the woman he’s pined for after all of these years?

Preacher David was right, the underdog does win.