On this episode of BET’s Boomerang, the love story between Bryson and Simone begins with a flashback to their freshman year of college. After several years of not seeing one another since their childhood, Bryson is shocked to see a slick-back pony-tail wearing Simone insert herself into his class during a presentation. Nothing has changed with her. Even pre-bob and with Bryson rocking a sharp Steve Harvey-like hairline, even from their younger days, they have always been the dynamic duo of marketing strategy. The product featured this week: Pro-Black T-Shirts.

The devastation of not having his secret love in his life spills over into their sophomore year when a beanie-wearing David and Crystal are happy in their fake hood love. By this time, a rapper named Prisoner has all of Simone’s attention and this makes Bryson big mad. The man can’t even hide it. In an apparent fit of jealousy, he calls Simone out for living under her father’s shadow, in front of everyone. It’s safe to say that sophomore Bry struck out badly.

This isn’t just about Simone and Bryson; they’re not the only ones who’ve made transformations over the years (and I’m not just talking about their hair ‘dos). In his earlier life, Ari was less eccentric and more focused on making his family proud as a young black man in college who isn’t running on BPT for class. Ari was as straight as 180 when he’s first put into a situation where he’s forced to confront his sexual identity. As big and bad as he looked while working as a “rough & tough” bouncer at a nightclub, a flirtatious patron sees right through that persona.  After being charmed by the man who helps him realize self, the rainy night sets the tone for a steamy kiss between the two in the front seat of Ari’s car. The look on Ari’s face is a blend of fear, then relief, then ultimately bliss as he seemingly reminisces on his random but welcomed encounter. Although he enjoyed it, Ari didn’t seem to embrace his identity totally. That same year, we see a less hood-David changing more into the Christian we now know and Ari isn’t buying it. Something about this “we can do all things in Christ mentality” rubs him the wrong way. Facing one’s true self is tough. 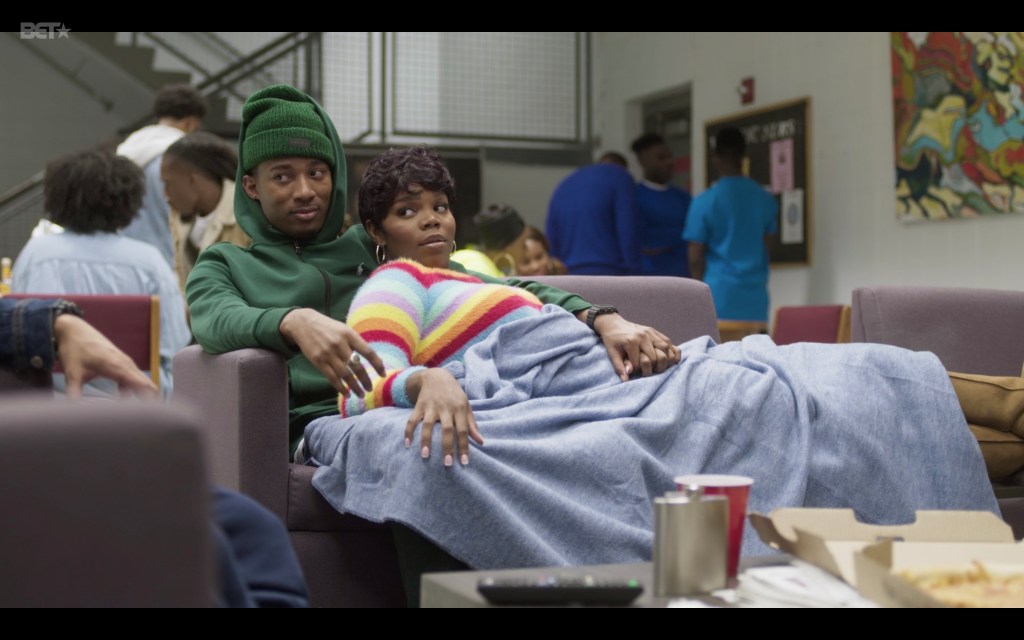 Junior year, Bryson has a much better barber but things haven’t changed; he’s still checking for Simone. She and Prisoner are still dating if you want to call it that. Prisoner is the type of dude you’d expect to see Simone date in college. He’s flashy, has money, probably doesn’t even go to the school, and he’s rude AF. As Simone and Bryson reconnect for the two millionth time, Prisoner’s pimp tone telling Simone to hurry up is a strong indication he’s not here for their friendship. In analyzing the hair, it’s clear that Simone is not herself. Seriously, at this point, she’s rocking a glueless lace wig.

With her new hairstyle, she realizes that she made the mistake of loving a man more than herself. Prisoner is officially a dub. To celebrate her revelation, she finds herself drunkenly wining and grinding on her childhood bae, Bryson. Does this look familiar? Well, think back to last week when they were doing the same in the parking lot before 5-0 arrived. Because she couldn’t hold it, Simone ends up using Bryson’s bathroom which leads to a very sober thoughts-type of conversation in the bedroom. It is recognized that Bryson has always had a thing for the kid and Simone regrets that she never said anything about her feelings. His commandeering attitude (like the day she walked into his class freshman year) reminded her of the Different World “Strangers on a Plane” episode. It was an iconic one because it’s where Dwayne and Whitley’s love story began. That’s a telling comparison.

With that being said, Simone always felt Bryson was the Dwane to her Whitley. Unfortunately, the timing was always off and just when we think the two finally catch up to one another, cue: the vomit. Poor Bryson. Did someone do brujeria on this kid? He has the worst luck. But, like the gentleman he is, he takes care of his queen to make sure she’s all comfy in her drunken slumber. He whispers, “I love you Simone Graham,” but on the wake up it looks like sis suffers from sudden amnesia. She pulls the “best friend” card, making it clear that it’s friend zone from here on out. Prisoner’s trifling friend calls to offer to take Simone out to eat and in an act of “let me solidify that Bryson knows this is going nowhere,” Simone agrees to go out with her ex’s friend. Once again, a blue-balled Bryson is left sorting out his feelings that Simone continues to perpetually confuse.

It’s important to note that the story of Brymone is not a new one. We’ve seen it in many action movies, comic book flicks, and on “Strangers on a Plane” where the geeky male character is overlooked by the badass female, only to win her affection in the end. Nice guys don’t always finish last, but in Bryson’s case, could it possibly be heading in that direction and is Simone even the heroine worth winning? In browsing through what is essentially the best years of any young adult’s life, Simone had many times to figure out if Bryson was the one for her and yet she chose to ignore her feelings. Unlike David, it’s not like she found Jesus; she hasn’t yet found herself.

One thing she does know is that she cannot lose Bryson because it’s possible she may love and need him more than she’d like to verbally admit. He’s no Prisoner or no flashy member of the entourage. He’s the “gentleman who wears tuxedos and makes sure his homegirl is safe” type of dude and unfortunately, that isn’t one Simone is interested in, for now.

'Boomerang' Episode 5 Recap: The Let Out