It’s a somber day at the Graham Agency. It’s practically a ghost town. After years of silence, the #MeToo movement has finally caught up with the company, leaving Bryson and Crystal on the unemployment line for the first time in their lives. Bryson understands how the climate was different back then; It was difficult for women to come forward about sexual assault or misconduct in the workplace. But Bryson can’t help but think, “What about us?”

The awkward tension isn’t just at the office. Simone is being cold towards everyone and Bryson tries to figure out why. The girl is refusing plantains while braiding Tia’s hair; she needs to eat. With her blank stares and one-word responses, it may not appear that way; Simone likes everyone around. A phone call from her father makes the reason for her sadness obvious: Marcus is the center of these allegations.

Disappointing? Yes, but as Tia points out, Marcus Graham (Eddie Murphy) acted a whole fool back in the day. Y’all seen Boomerang? Of course y’all did. Do you remember when Marcus approached Jacqueline (Robin Givens) with a “Hey Boss,” and then after she reminds him that they are colleagues working on a Strange ad, he replies that he was just trying to hit her with his “Mack Daddy vibe?” Yeah, he’s been a playa and he’s crushed a lot. These allegations are not farfetched. As much as Ari feels it’s old news, Tia strongly disagrees. The hurt from those situations never go away and if women keep quiet, men will keep feeling that this despicable behavior is okay. Women are cat-called, groped, and harrassed by overly persistent men on a daily basis. You can’t even go to the local Dolla Tree without some foolio calling out, “Yo, ma, can I talk to you for a second?” It’s annoying. It’s unwarranted. And in some cases, it’s scary. Ari and David are just not understanding the point. To them, this is just another case of women not knowing what they want from men. For those of you who think similarly, let me break it down to you, according to Tia: “A man calling a girl ‘cuteness’ that ain’t his girlfriend ain’t okay. A man staring at a woman’s titties while she’s at an audition for a lotion commercial ain’t okay. A man that tilts his head every time a cute bi**h walks by ain’t okay.”

Not all of the women are standing in solidarity on this one. A now-jobless Crystal thinks it’s pretty coincidental how all of these accusations surfaced right before a potential merger slated to make the company some hefty coin. In her eyes, no one was actually raped, so why make it such a big deal? To make it (dare I say it) crystal clear for her, Tia stresses that just because he didn’t force himself onto anyone doesn’t make it okay and, in her opinion, the Graham Agency should be shut down. 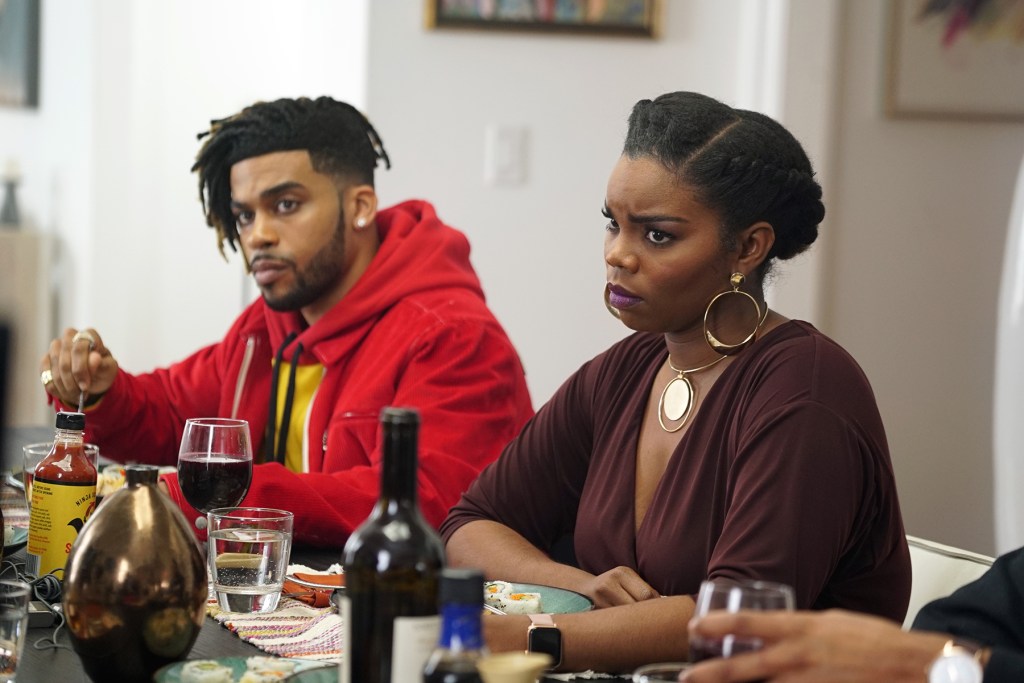 Pastor David offers up the Good Word, reminding them all that it is no one’s place to judge. “What about my mother?” Simone quickly snaps back. A generic “God wouldn’t put her through anything she can’t handle” is all he could muster up as an adequate response. Recognizably, the church isn’t perfect but Pastor David disagrees with the group’s consensus that religious folk are the most judgmental ones. Tia could never date a pastor because sex and the Holy Ghost don’t go together and a vino-sipping wine blows up his own spot with a cheeky, “Says who?” Crystal’s head twisted towards him quicker than the exorcist. They’ve been divorced since he began a relationship with Jesus, so how would he know?

When we speak about celebrity perpetrators we have to speak about the cancel culture. As much as we loved to step in the love, R. Kelly (allegedly) pees on underage girls, and for that, no music of his shall ever be played again. Them is the rules. Ari tries to justify still playing “12 Play” despite the numerous documentaries proving Kelly’s guilt by asking if any of them have actually seen the tape.

One, who would want to see that tape? And two, who would make that up? To Tia, that’s no different than Bill Cosby drugging women (whether they were white or black doesn’t matter.) R. Kelly can definitely be canceled but Cliff Huxtable is a touchy one for some of the fatherless men of the crew. They looked up to him. Like many who grew up on the Cosby show, Ari felt a bond and connection through this television family that he couldn’t find anywhere else. It had a major impact on his life. Bill Cosby’s mistakes shouldn’t affect Ari’s childhood but he is quickly reminded that they affected the lives of his victims. The show is no doubt iconic but those women have experiences and flashbacks that don’t begin with a catchy theme song. 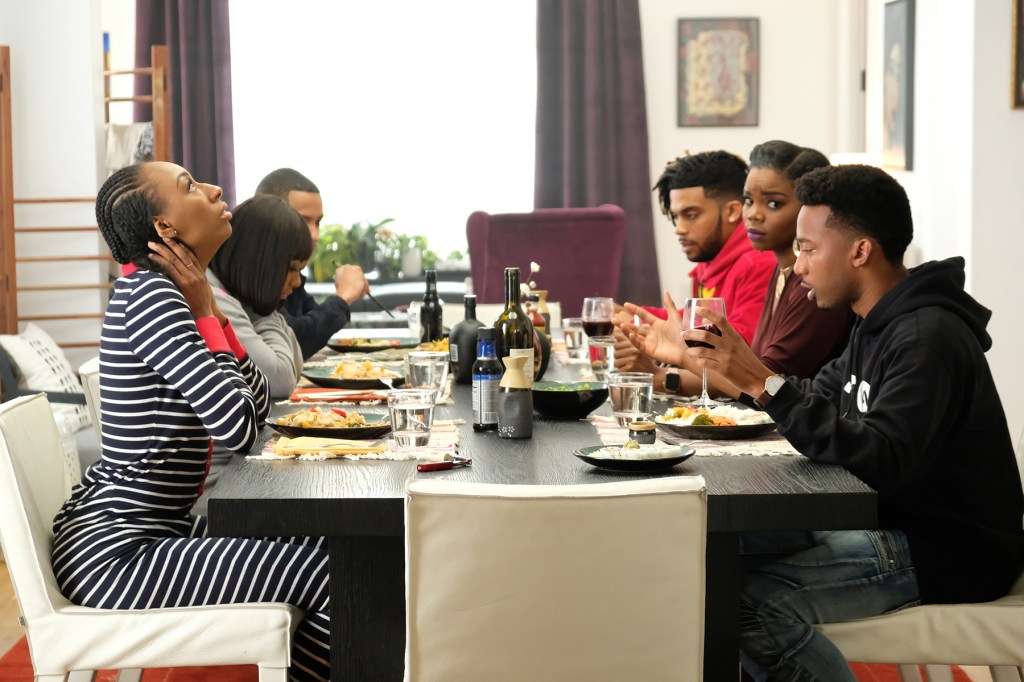 If this crushes anyone, besides Simone, it’s Marcus. Finding out Marcus Graham is presumably the black Harvey Weinstein is like finding out Superman can’t fly to him. He looked up to the man and always aspired to be just like him. Marcus’ generation was different, and as millennials, they all can agree that they need to get on the same page of where their line is, you know, the one that can’t be crossed. The men are beginning to understand what Tia has been passionately trying to explain: Treat a woman how you’d want someone to treat your mother, assuming that you love your mother. In retrospect, Simone feels her dad took advantage of her mom. Take that Strange ad I mentioned earlier, for example. In Simone’s opinion, Angela (Halle Berry) would not have had the opportunity to work on it on her own had she not been dating Marcus. It probably still would’ve been Jacqueline’s. Sometimes it could be mutual but often times, it’s the man who applies that pressure.

Throughout the night, Crystal’s position remains the same, “It ain’t that bad.” 20 years ago or 20 days ago, wrong is wrong to Simone and she feels Crystal is just deflecting because of an incident that happened to her. In Crystal’s case, she didn’t say anything because the assumed rape was also her fault but Simone calls bullshit. Crystal didn’t report him because he was black. She said, “No.” That’s all that mattered. Offended that Simone called her out, Crystal storms out giving her friend a minute to just calm down. Towards the end of the night, the group stands on different positions on how they think everyone should move forward. Marcus may have been trash, but he is married to Angela now who is a boss baddie and a bomb mom. Tia disagrees with Simone, feeling like no one can move on until the victims can which might be asking for a lot. A few of them have looked up to Marcus as a father but out of everyone, he has one biological daughter and that’s Simone. As unbothered as she’s been presenting herself, the battle going on in her mind between the love for her father and being a feminist is still going on. As far as what she’s going to do next? She has no idea. But she needs to process all of this.