On a gloomy day in New York City, I walked into the back rooms of the BET studios and was introduced to the big, smiling faces and bubbly personalities of the cast of Drumline: A New Beat. It was still early, but they should be now running on fumes (if you ask me). They’ve been doing press runs throughout the week, spent the weekend at Howard Homecoming (“FAMU and Howard were both great, it was a lot of fun”) and I was told they weren’t done with that particular day until 9:30 p.m. Honestly I’m already tired just thinking about it, but they weren’t. At least their personalities didn’t show it.

I sat down in the small room filled with two of the young stars, Alexandra Shipp and Jordan Calloway. Shipp was getting touch ups on her already beat face by AJ Crimson and Calloway was watching with the rest of their team on a BET viewing of Jamie Foxx’s Held Up. They began paying attention in the middle and were all trying to figure out what was going on in the film. Luckily Alex’s brother, James, who seems to be good friends with everyone, gave them a play by play on the film. Shipp on the other hand, still seated in the make-up chair was trying to fit family time in her already tightly scheduled.

And I was the fly on the wall.

Soon Letoya Luckett walked in the room, ready to have her hair touched up by Larry Sims and make up by AJ. And right after, Nick Cannon would come in, looking pristine in a purple suit—no two million dollar Tom Fords this time—and a small Mohawk. He quickly joked with the room of people as if he knew everyone his whole life. From the glam squad to the ones that make sure they are running on schedule, fed, and know what’s coming up next, to the stars of the film, their experience together has ultimately created a close, tight-knit mini family.

First up was 106 & Park and next, VH1 Buzz. Throughout their packed day and huge entourage, I was able to get a word in about the film. The questions were different and the characters’ experiences weren’t the same, but each star made it known that this was not a sequel but more of a continued tale of another’s story. “They named it Drumline: A New Beat instead of “Drumline 2” because it’s a completely different story line,” they all said in one way or another. It’s obvious that they’ll have answered the sequel question so much that by the last interview, they will sound robotic.

But they were right. From the character being a girl to the love triangle happening with the Dean of the school, there was nothing “sequel” about Drumline: A New Beat. It was like any school story line: every year a new, different group of students come in with their own trials and tribulations while trying to make a name for themselves on the field.

Trust us, Vixens, there’s much to take in. Flip the page to learn more about the humble and welcoming cast of the film, which premieres on VH1 tonight at 9 p.m. EST. 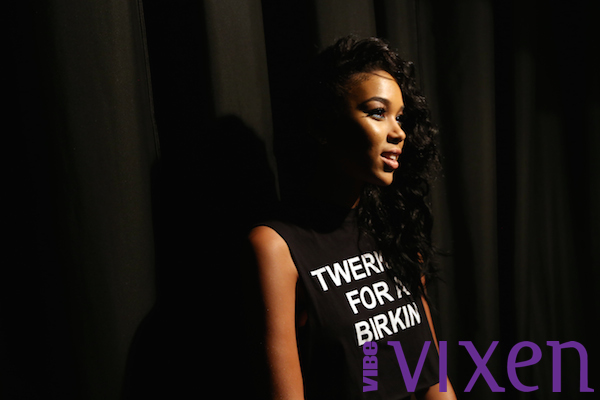 VIBE Vixen: What’s one thing we’ll appreciate to see that he decided to use a female instead of a male as the lead this time around?

Alexandra Shipp: I think it’s easy for people to stick with what they know. I think Nick in his own right is an innovator. When it came to this story, he obviously loved it. He’s spoken about Drumline many times, saying that it was his first, most amazing experience and it was a way for people to see HBCU college in a really great light. I think that he said I want to tell this story but I want to make it different. How do I take this story and not make it the same old thing because it’s not the same Drumline. It’s not Drumline 2, it’s Drumline: A New Beat. So, he obviously wanted to change the story and him bringing in a girl was a really great because it is a man’s world and girls are often overlooked on the line, or just seen as another person on the line. I think he wanted to tell that story a little deeper. 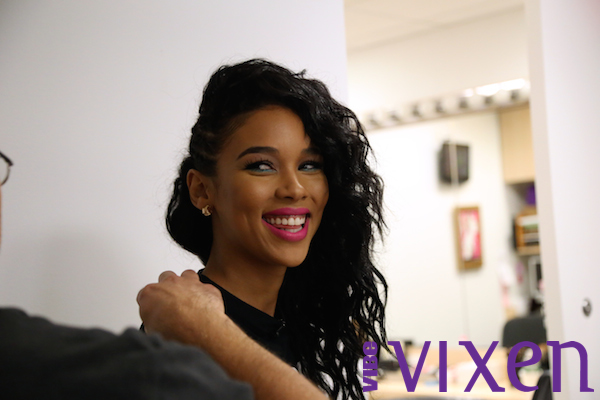 What did you learn about yourself playing this character?

Alexandra Shipp: I learned how far I could push myself on this job. It wasn’t just an acting job, we weren’t set up in air-conditioned rooms, we were on a field drumming, the nitty gritty. It was shot in Atlanta, it was hot, we were sweating, it was really, really humid.

If you could go to any HBCU and be on their marching band, which would it be?

Alexandra Shipp: I just went to Howard Homecoming it was fantastic. Although I will say Florida [A&M] did their thing, they had something to prove, which I understand why they did it and came so hard.

Explain your role in the movie?

Jordan Calloway: I am Jayven and I am the son of a very talented musician.

So you’re a little cocky in the movie?

Jordan Calloway: Yes, I am, I do have that cockiness, that uppityness, that confidence that you constantly see portrayed in the film. The thing about it is my demons. When you get to know me more as the project permits, and see who I am as an individual as Dani does through her lenses, you realize, “okay he actually is a teddy bear, he has a heart and soul, he’s just misunderstood.” And the thing is it’s a wall that I built up for that character. I don’t want to let anybody in and I feel like there are many of those individuals that have been hurt by many things, they don’t want to let people to see.

What was the hardest scene to film?

Jordan Calloway: Probably, the scenes in the dorm room, the only reason why is because we got started extremely quick when the month of June hit and we jumped right in those scenes right off the jump. We didn’t get any build up scenes, beginning scenes, or drum scenes to get better acclimated with what’s going to go on and what was going to happen. So we had to dive into the drama scenes right away which was cool. 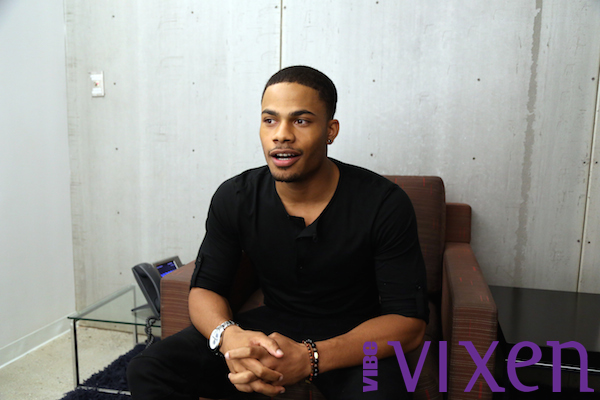 Are you actually playing the instruments?

Jordan Calloway: Yes, we are playing the instruments but was also have hands that are also playing too. It’ll be interesting to see if our own cadences are in there as well because a number of us practiced extremely hard.

How long did you have to prepare?

Jordan Calloway: We had two weeks of intense drum class where we learned inner beats, cadences, marching, the accents. We learned a lot of that stuff and we packed it into two weeks. When we got into filming I spent a lot of time with my hands, Marcus Joyner,  and we put in a lot of hours together. 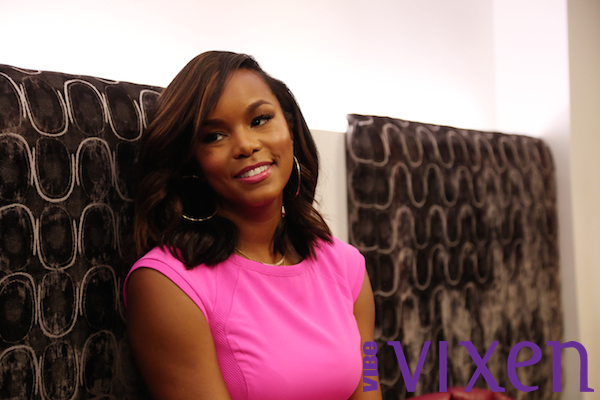 How was it playing a character of this caliber?

Letoya Luckett: This one was different. I love playing women in high positions, powerful positions. She’s a dean of a University and she cares a lot about the school and the students. Her priority is to make sure that the school has the funding that it needs to keep the band alive and to have a great school that people want to attend. Unfortunately some matters of the heart get involved, but she was a fun character to play. She was a laid back chill kind of girl.

How was it being on set surrounded by the band atmosphere?

Letoya Luckett: It was cool. For me the most exciting thing was the band because I’m a really big fan of marching bands. A lot of times I would come out of my trailer when I’m supposed to be on break or eating lunch and if they were filming on the field, I would sit and eat my lunch and watch them perform. That was what was most exciting to me. That’s why I was such a huge fan of the first one because I was always a big fan of marching bands. I don’t think people understand how much work goes into. It’s a lot. 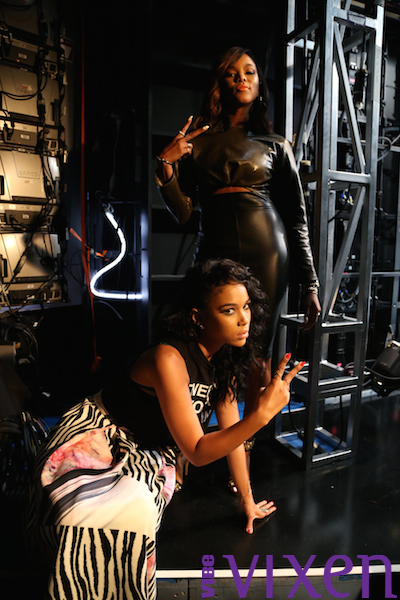 How did you prepare for this role?

Letoya Luckett: My grandmother was a dean. So I was able to pull from that, just the way she carries herself. She’s just a woman of class and grace and she knows how to get the job done without screaming at people. She’s a boss and you have to have that mentality and keep that mentality.

Alexandra Shipp: Getting ready for this role was really fun. We had about two weeks of intensive drumming and marching. For me personally, I had seen Drumline a million times but it had been maybe a couple years since I last watched it. So I bought it on Amazon, watched it about a million times, really trying to see how—because Nick was really drumming the whole time—he carried his character and how there were similarities to Dani as there were to Devon. Just little things but there wasn’t a lot of time, it moved really quickly. 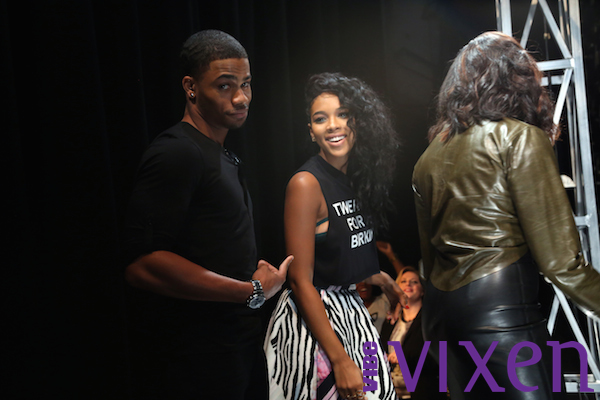 Who would you say is the jokester on set?

Jordan Calloway: Alex, she’s a goofball. She’s a perky kid and it was lovely having that. Also I would have to say Scott [Shilstone]. He’s absolutely hilarious.  He doesn’t have to say too much but if there’s a conversation going on you’ll just hear him come in out of nowhere.

Letoya Luckett: I had a lot of scenes with DeRay [Davis], so you already know how that goes. DeRay that was it for me. He played my ex husband so that was a lot.

Were the scenes with DeRay funny?

Letoya Luckett: He makes them funny. It’s a serious situation, I’m caught in like this love triangle, but he brings humor to it somehow. I don’t know how you could possibly but yeah, he did. 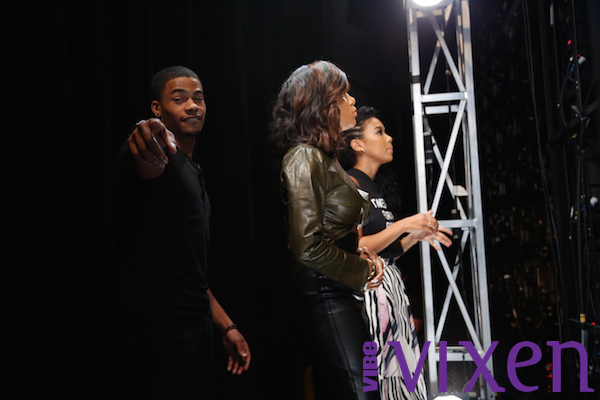 If I can ask, which one is better the first or the second?

Jordan Calloway: Drumline is a classic. And me as an audience member, I always have my skepticism when it comes to sequels as everyone should. However the new one and it says it in the name—not saying that it’s better, not saying that it’s worse—I’m saying, it’s its own authentic piece of work. Our whole writing staff did a phenomenal job and the casting was perfect. What it adds is another layer.

What I love about this film is that it dives into it and has more of an approach from different characters. So you get more of  a look of what’s going on deeper with every individual within the band and then you still have the focus of the drumline. All the drumming that goes with the whole line as a whole and how they are able as a group and as individuals to overcome those things. Because everyone in this film is dealing with their own personal demons and it’s addressed. The wonderful thing about this is it allows the audience to relate with a certain character because there are numerous characters that are explored in this film.

Finish checking out pictures of our day with the cast of Drumline: A New Beat. 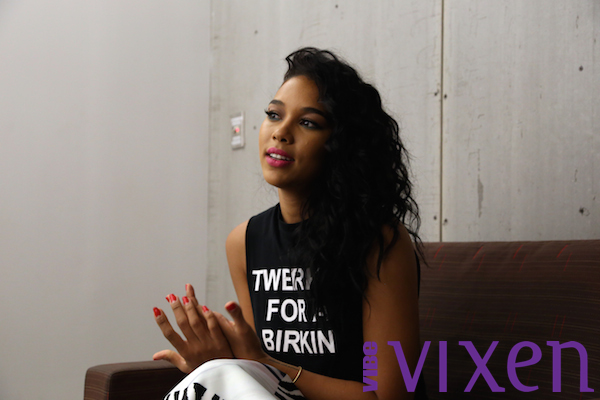 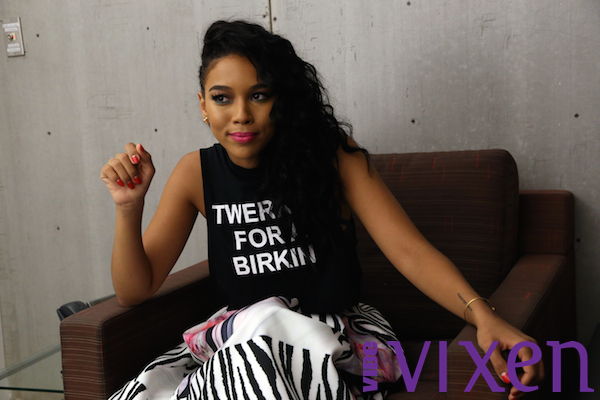 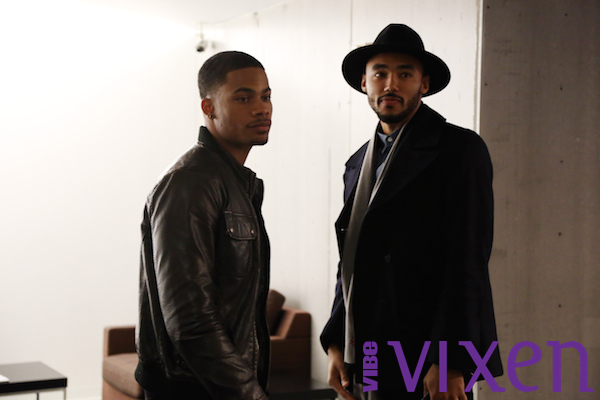 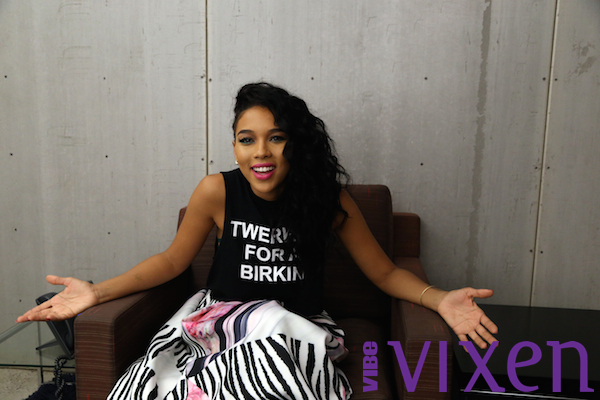