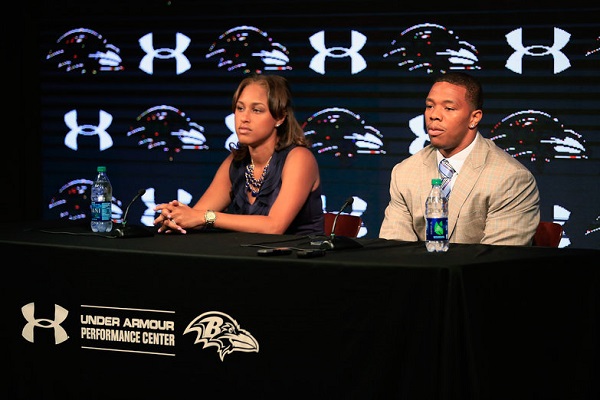 If you thought the way Solange tried to manhandle Jay Z was bad, wait until you get a look at the newly released footage of NFL player Ray Rice and his wife. The Baltimore Ravens running back is currently on a two-game suspension that stems from simple assault charge that the he struck his then-fiancee, who is now his wife, Janay Rice in Atlantic City back in February. Today, TMZ has released the elevator footage that confirms what happened that night.

In the three minute clip, there seems to be some tension between the couple. When they entered the elevator, they continued having words and Janay charged at Ray and he punched her. On her way down, her head hit a railing on the elevator and she was knocked out cold. Once it was time to get off of the elevator, an unremorseful looking Rice dragged her out of the elevator, which caught a staff member’s attention. Towards the end, Mrs. Rice regains consciousness and was taken away.

The existence of this video was confirmed back in July and was reviewed by the NFL, the Baltimore Ravens, Rice and his wife.

Since the video has been let loose, Twitter has gone wild. People are outraged that this disturbing footage only led to a two-game suspension and that the 27-year-old was not penalized more harshly. After laying your eyes on the video flip through to see 20 twitter reactions to this Ray Rice fiasco.

She still married Ray Rice tho… I feel ppl want a severe punishment for their own satisfaction as oppose for the wife/fiancé.. — Jesus(Mario)Gongora (@RMadridHooligan) September 8, 2014

Just watched the Ray Rice video smh… Bottom line is both of them were wrong! Sad situation for both — Robert Henson (@Mr_Henson51) September 8, 2014

The end of the Ray Rice video where he drags her out like a bag of old laundry is the worst part. — Princess Chelsea (@chelsea_elisa) September 8, 2014

That woman could have died. For anyone to fix their mouth and defend Ray Rice is mind-boggling to me. I cannot fathom how. — Awesomely Luvvie (@Luvvie) September 8, 2014

I don’t feel bad for Ray Rice’s wife, she went ahead and married him after he beat her up. No man should hit a woman and vice versa — Damaris Isabel (@damarisabel) September 8, 2014

I understand ray rice was wrong, but she did marry him a month later….. some of yall are madder than she is.. — Michael Bowie (@61likebow) September 8, 2014

idk whats worse the fact that ray rice only got a two game suspension for knocking his fiancé out or the fact shes still with that fool — danielle (@assreguii) September 8, 2014

Ray Rice is suspended for two games for hitting his fiancée. If I did that, I would be in jail. Stop letting celebrities have a pass. — CM Punk (@TeamCMPunk) September 8, 2014

No amount of money can cover the long term effect that physical/ mental abuse has on a person, I’m ashamed of Ray Rice AND his wife — est. MCMXCI (@OlKingKidd) September 8, 2014

Ray Rice is the worst. Can we have Antonio Brown kick him in the face? Then ban him forever!

I would very much like to NOT see Ray Rice play football this season…or maybe ever again. What a despicable series of events.

The fact that chick still married Ray Rice after he Muhammad Ali’d her is a whole different level of screwed up. — Princess Chelsea (@chelsea_elisa) September 8, 2014

Deion Sanders wants us to “pray” for Ray Rice’s marriage. If “pray” means work actively to eliminate systems that enable abusers, then sure. — Olivia A. Cole (@RantingOwl) September 8, 2014

Man Ray rice ain’t have to piece shawdy up like that smh but who knows what she did b4 that…not sayin she deserved it — john flowers (@jflow41) September 8, 2014

Oh, I see @nfl you need to see Ray Rice beat a woman unconscious before you realized a 2 game suspension was a joke. knowing wasn’t enough? — August (@augustbenassi) September 8, 2014

It’s sad Ray Rice’s fiancée is apologizing for him beating her. Like wtf.