Larenz Tate is as soulful on screen as he is in conversation. Vixen caught up with the veteran actor who is currently appearing on Showtime’s House of Lies.

Playing Malcolm, the younger brother of Marty Kihn’s (Don Cheadle), Tate’s reoccurring role on the drama series has catapulted him back into the spotlight and brought a fresh new energy to the TV hit. But while he’s soaking up premium cable looks, he’s also dabbling behind the scenes as a director.

He’s got quite a few other projects developing this year that he can’t share yet. But in the meantime, he was able to dish on House of Lies, Nia Long and working with Melanie Fiona. — Sharifa Daniels

VIBE Vixen: Tell us about the show House of Lies.
Larenz Tate: House of Lies is one of those shows, that I watch and I’m just blown away by what they’re able to get away with on a premium network.  It’s an incredible show, its funny, its sophisticated, it has this cool, sexy, classy world about it. Don Cheadle, who is incredible, and what’s funny is he and I never talked about me joining the cast or jumping on season 2 before; I just told him, “I love your show; I love the fact that you’re back doing television.”  It’s something that people wouldn’t expect coming from him.  You would assume that he’s this very serious actor that doesn’t have a funny bone in his body but its quite the opposite, he’s extremely funny, super smart and I think this show, fits a side of Don that people don’t know.

Explain your character in the show.
He [Cheadle] and his crew [the pod] are all about beating the rich fat cats at their own game, and it’s interesting because my character, Malcolm, is polar opposite of Don’s character, Marty.  We’re brothers but we don’t get along; we’ve always had sibling rivalry. My character is all about occupying Wall St. He’s about the movement, the revolution, protesting, about speaking up for the common individual who doesn’t have a voice; one of those guys who considers himself as a mover and shaker in the community. That there makes a complete conflict with [Marty], but it goes a lot deeper. We have a lot of history. You’ll see that as the character grows on the show.

Here's Your First Look Into 'The Best Man' Limited Series

What’s the reception been like since joining the cast?
A lot of people have just been happy to see my face surface. People are intrigued by the fact that I’ve joined the cast with Nia Long. We bring a different demographic, a different audience to the show, and the response has been been positive. When my character was introduced, I was doing live streaming via Twitter and Facebook, and there was a lot of support.

So how has it been working with Nia again?
My relationship with Nia is an incredible. We’re even closer now then when we were doing Love Jones. Working with her is extremely easy. We spend more time laughing at ourselves and enjoying the fact that people want to see more of us together. We want to do more films together, and I think that it’s long overdue. Obviously we want people to watch House of Lies but we also want to find the best project to do as far as film, and it’s probably going to be in the same world as Love Jones.

That’s exciting. Will there be any romance between you two on House of Lies?
[Laughs] Ya’ll just gotta watch it and see. I’m not at liberty to talk about all the episodes. Tune in to see what happens. 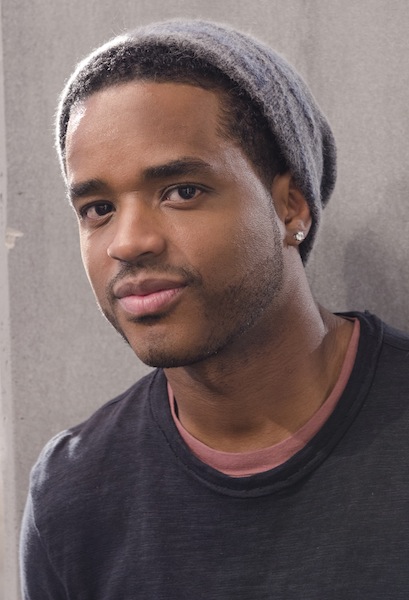 VV: Switching gears a little bit, I want to commend you on directing Melanie Fiona’s new video.
LT: We had a great time. Melanie is extraordinarily talented. She’s an incredible artist and equally an incredible person. She and I went back and forth on the concept of what we both felt would do justice for the song and really elevate the song’s imagery. What I wanted to do in the video was give her the opportunity to not only perform the song, but also tap into her own personal experiences and showcase what she can do as an actress. I’m looking forward to doing stuff with her in the future.

Which one do you love more: acting or directing?
I’ve been acting since I was 10 years old. Directing is a new love; acting is something that I’ll always do and it’s apart of who I am, so I love it. I’m very excited about being able to do both of them.