King Los has been showcasing his knack for lyricism and wordplay for quite some time, with accolades from many industry power players. But, despite his major accomplishments, crossover commercial success continues to evade him. “I may be not as known as I should be, but underrated—I get the highest of accolades as far as my craft goes.”

Upon speaking to the 32-year-old rapper and family man—he and gf Lola Monroe gave birth to a baby boy last year—you get an immediate understanding of just how philosophical the Bad Boy affiliate is. His thoughtful outlook on life manifests in his music. The metaphorical chess master knows his position, appreciates his guidance, and understands that his success will only magnify.

We caught up with the Baltimore-native following the release of his latest mixtape, Zero Gravity 2 and midst of his In My Own Lane tour with Kid Ink and Bizzy Crook. King Los opens up about everything from fame to his family life—and even volunteers to FaceTime a fan. Find out how after the jump.

VIBE Vixen: How was the response been for Zero Gravity II?

King Los: It’s been pretty good, it’s platinum on Datpiff.com. People like it for the most part.

Mary J. Blige Details How Diddy Was Both Her Teacher And "Biggest Cheerleader"

If you were to battle rap somebody, who would you feel is a worthy opponent.

Eminem because he’s great. He’s loves to battle. I would say Cannibus but he’s not as into it as he used to be. Eminem is highly competitive and it would be more so about lyricism and not cars and shit. It would be more about who’s the better MC.

Do you feel as though people are getting more praised for talking about the glam life instead of talent.

No. You should because it’s a lifestyle that’s generated from what you say. It’s actually dope if you can say something about a car and have that car in a couple years. It’s like what God did. He said ’let there be light’—you have to speak that into existence.  It all starts with a thought, so if you say, ‘I don’t have this, I’ll never have this then you won’t.’ It’s not just about the glorification of certain things but there’s lifestyles that people know and things that certain people identify with more than others and that’s going to be the thing they talk about it more than most. I can’t knock anybody because we all have our moments. I don’t think nothing’s wrong with celebrating success.  If you have a [Mercedes] Benz talk about it because you didn’t have it at one point.

VV: Will you be dropping an album at all or sticking to mixtapes?

KL: I think I’m going to put out an album but it’s really no difference if I put out a mixtape that’s completely original material. Only thing that’s different is the name. It’s like if we were together for 10 years and I could say you’re my girlfriend, but [if you never were] what’s the bases on how we differentiate the two, we live together, what’s the difference, a title? It’s a lot of silly shit going on in the world, I just don’t have the time for it. I had 4 projects that are completely different; it takes the same amount of time as an album, the same amount of thought. People look at that in so many different ways, it’s all perception. It’s all like if you have a record deal, it’s all these things that people expect to see. It’s all fantasy.

With the album comes more awards, do you care about that?

The things that make your fans love you first are not albums. The albums is the reward of them riding with you for years. The person that they want is in that mixtape. When your doing an album a lot of times they don’t get the person they fully want because the business aspect of everything kicks in and it changes you slightly, but it has to. Certain things you have to abide by, certain sounds you have to put out there to sonically grasp masses and sometimes it’s not that raw person that everybody fell in love with on a mixtape. There are all these things that go a certain way but you can shift paradigms if you want to. You don’t have to do any convention methods of success you can predict anything.

Are there any wedding bells in the future?

Sure. I’m not a psychic but definitely the future. Absolutely for certain, the future. I’m just dealing with things one step at a time.

Do you want to have more kids?

I don’t know. I didn’t plan my first child because then you put limits and clocks on stuff and you create the opportunity to be disappointed. People put clocks and countdowns on shit they can’t live up to; don’t do that. You have someone enjoy them, make them feel special, enjoy them and the time they have. I remember being with a girl and time allotted us a title and I don’t even speak to the girl to this day and we were together for a long time.

Everything. You only learn from failure, you can’t learn from something you did right. Failure is the system that teaches you.

That you can be unhappy and not know it

How to be a true friend. We were friends first, real friends, like best friends. And then we kicked it on a different level but we were like best friends for a year straight. A lot of people don’t have real life stand up friends because your friends shouldn’t do some suspect things.

So much but how to be humble, how to lose an argument, how to empower other people and still be the successful one. A lot of secrets and maneuvers, he’s crazy, he’s ill with it and wise.

Lesson learned from the music industry:

That it’s a trap.

That if I “dumb” down my lyrics for a larger audience to be more receptive of what I’m saying, that doesn’t mean I’m dumbing down my lyrics, it just makes me a great communicator. That’s what I learned from Brixton because by having a baby you have to speak to them a certain way so they can understand you. It’s steps to it and certain dialects they understand, so I look at people the same way. If I can communicate with my son and get him to understand what I’m saying and he can’t even speak than I’m a great communicator. If I claim to be a great communicator but there’s people that can’t grasp my concepts or messages because they’re too intricate then I failed as a great communicator. So if I “dumb” down so to speak, it doesn’t make me less than what I am, it makes me greater because I’m reaching a larger audience which is smarter than only one group that’s able to be receptive to my message.

Lesson learned from growing up with less:

Lesson learned from falling in love:

You grow into love; you don’t just fall in love. Because to fall in love is a sudden thing, its not like that, its more like growing to bond with someone to the point where the person fits you through thick and thin, you can’t just prove love, its not even real. That’s where most people are fucking up. They try to fall in love and you can’t fall in love you have to grow in it. 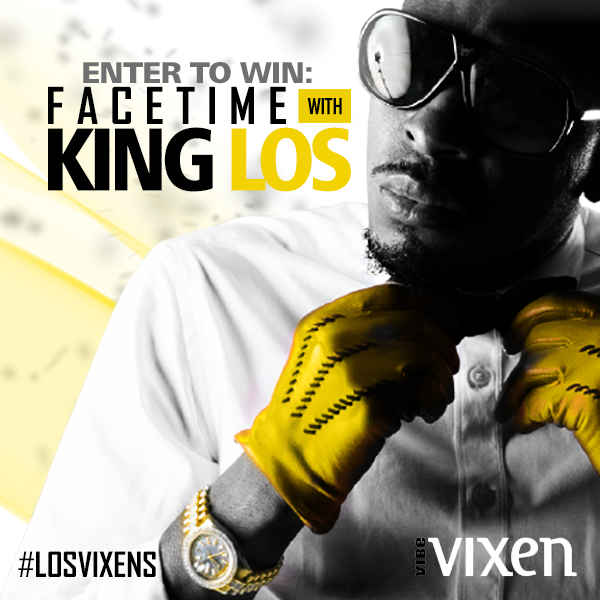 This Friday (June 2nd), we’re making your #MCM dreams come true with the opportunity to FaceTime with King Los. We’re picking three fans to have the time of their life while chatting with the on tour rapper. To enter, you must post your best #WokeUpLikeDat picture on Instagram with the hashtag #LosVixens.