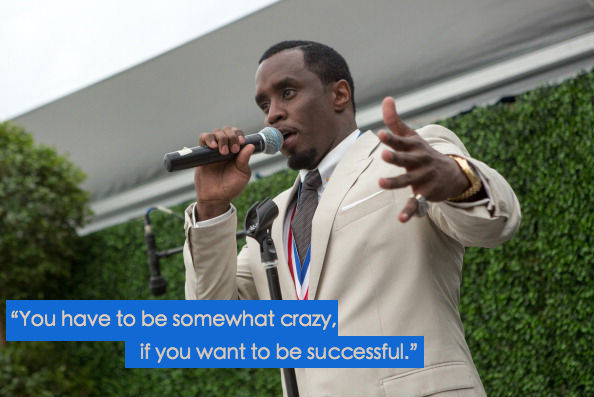 Diddy is one of the men in Hollywood that you may not like but you definitely respect him. He is living the American Dream his way and inspiring others to do the same. Not only is he a entrepreneur and music mogul, but he’s big on giving job opportunities to many young people through his countless business ventures.

See Related Article: 16 Reasons Why Only Diddy Can Change His Birthdate

“You have to be somewhat crazy, if you want to be successful.”

“Sometimes I made you proud, and sometimes I didn’t. But I made the decision to keep going, to keep trying, even if it meant that sometimes I would fail.”

“I want you take the craziest dream you ever had, that dream that you’re too embarrassed to tell anyone about. And I want you to go after it.”

Surrounding myself with people that are smarter than me. I had to get to the point where I just had people working for me that were way smarter than me, and then number two was the follow-through. There’s so many talkers in the world… I just wanted to be known for my team being people that actually execute it… Stop talking, put some tape on your mouth, and go out there and do that shit.

“Nobody is going to give you nothing out here. You’re going to have to literally go and take it, in a positive way: by earning it, working hard every day, and doing the things no one else is going to do — including getting cheese cake.”

“All the real money is made before 10 a.m. I done took all the money off the table by the time some of you wake up.”

“I demand the best. Sleep is forbidden. If you work for me, you have to roll how I roll. Im not really human. Im like a machine.”

“Throughout my life, I have rushed through some of my great moments. I promised myself if I ever reached this moment, I would take my time.”