Howard Homecoming is the only 72-hour event you plan months in advance. During this weekend you drink, party, and—for college graduates—you reenter your college days. Leaving that weekend with nights you can’t fully remember and exhaustion you can’t seem to surpass means you’ve had one hell of a good time. As an alum venturing back to reminisce with my Howard family and make new memories with my co-workers/friends, my mission was to find out if this year’s festivities will live up to the name: Epic. Between me and my posse we were able to hit plenty of parties getting a first hand experience. Check out my review of the good, bad, and unfulfilling parties during HUHC. 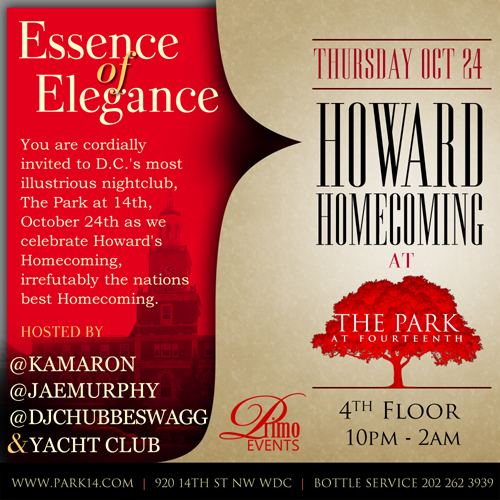 Park at 14th: “Essence of Elegance”

As an avid Park goer, I wasn’t too impressed with this experience. I was first surprised to find that arriving early for the delicious food special of free food as long as you purchase a drink no longer existed. This change in the establishment’s perks should have alluded to the type of crowd I would be surrounded by. Overall it was an overly-crowded event with too many men standing still uninterested in entertaining a good time with a female companion. Luckily for my sake this club still knows how to have VIP that allows you to exit the extremely crowded life.

The Park on 14th is still one of the best clubs in DC if you plan on partying with people who abide the dress code (sexy always) and want a ratchet-less great night. However as a kickoff party event during Howard Homecoming, I doubt I’ll be adding it on my must-go-to club for next year.

Vixen Verified: #1000Bottles Lives Up to Its Name

This inexpensive homecoming kickoff party—which was hosted by the HU Dream Team, was held at Tuscana West and featured an open bar until 11:30 pm. It was primarily a birthday celebration for a handful of the hosts, but it also doubled as the after party for the Homecoming Fashion Show. When the club reached closing time, patrons simply took the fellowship out into the street right outside and peacefully (albeit drunkenly) continued the turn-up. It was the perfect marriage of a much needed family reunion and pre-game for the crazy weekend to come.

“It was so nice it must be mentioned twice.”

It’s foolish to miss this turn up considering past experiences with Dream Team parties was for the most part a major win. However, catching the clubs let out was more fun than the 4 hours at Essence of Elegance. As I crossed the street from Park to see what all the ruckus was, the streets turned into complete party mode. Freezing but still cute (keep it cute ladies!) I partied with the crowd of wide awake-turnt-partygoers like this was an actual party. Next year I’ll be ready with my ticket to actually enjoy the inside of this must-attend party.

#1000 Bottles is a must party spot during Howard Homecoming. A sea of men and women dressed in their black excellence is the first thing you see upon entering this event. Held at the Howard theatre by BE LLC and The Gifted Life, the venue alone gives you an immediate feel of prestige. Fast forward too free premium liquor drinks and the best music from DJ Chubb E Swagg—the turn up was unimaginable. This Ciroc, Crown Royal, and Heineken sponsored  event lives up to the hype, the cost, and the actual experience.

We know this isn’t an actual party but if you’ve ever attended then you know it qualifies. For an unofficial event during Howard Homecoming, even the celebs know this is the must go-to-spot before, during, and after the football game. It’s a daytime reunion with your past friends and first time meet and greet with outside visitors. Plus with celebs like Mack Wilds, Lance Gross, and Yandy Smith in the vicinity, this your best chance to make small talk with your favorite celebrity.  This spontaneous social gathering made up for the many fails of Yardfest.

Unfortunately the hype of Hennypalooza is more accurate in NY than in DC. Being on the outside of a should’ve attended event I was bummed until our friends lucky enough to be inside hit my phone several times unimpressed with an event that didn’t live up to it’s liquor-endorsed name. Proceeding to my twitter timeline (your official second source) my mood was quickly turned from FOMO (Fear Of Missing Out) to excitement for move number 2.

Houseparty is the perfect name for this event. Hosted again by BE LLC and The Gifted Life, this duo group proves they know how to throw a successful turn up. Unlike their #1000 bottles cocktail attire the dress requirement is less critical. This come-as-you-are event is the closest to an actual house party you’ll get to in today’s era. The event space was a bit small and no one respects the VIP area but if you’re trying to party and bullshit in a ground shaking (literally) atmosphere, this is the event that will supersede all expectations.