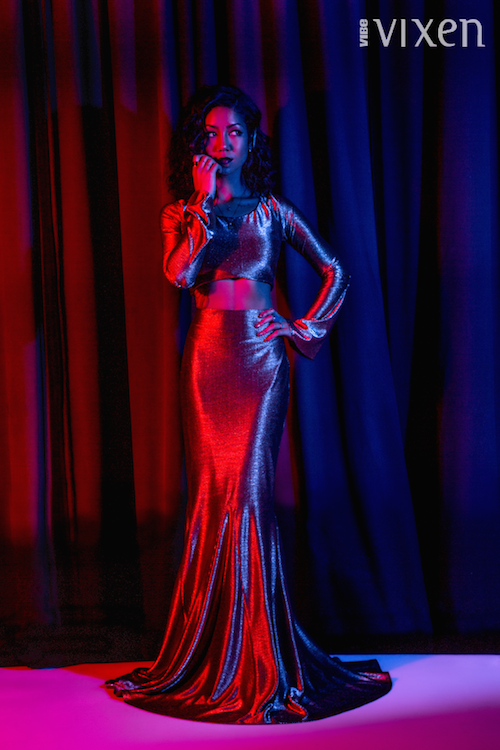 Jhené Aiko is the worst at color-by-numbers music and her die-hard following is better off for it. Ask that one fan who almost became a suicide statistic twice before Souled Out pulled her through. She’ll tell you how Aiko’s lyrics has an authentic presence made for millennials. So will her competition if they’re honest.

Almost 24 hours before Valentine’s Day, Jhené Aiko drops the L word. After wrapping a performance of her biggest solo radio hit “The Worst” on Conan, the petite folkstress—who has even opted for heels over her traditional barefoot routine—professed her love to the orange-haired host on-camera. He reciprocates before purring like an enticed Pepe Le Pew as she asks him to be her Valentine. Despite Conan indirectly turning her down (“The wife gets mad”), Jhené’s cheesy grin shows no hard feelings.

“That was super surreal for me because I’ve been watching Conan O’Brien since middle school,” Jhené says over the phone. “I didn’t know how I was gonna react. When I’m a fan of someone, I turn into a dork and I’ll say the first thing that comes to my mind. It’s usually a little awkward.”

Late-night introductions can be tricky, but Jhené’s a pro. The previous week, the Slauson Hills native performed on Late Night with Jimmy Fallon (before his Tonight Show takeover) then popped up at 30 Rockefeller Center on Saturday Night Live for a surprise rendition of “From Time” with Drake, her eventual tour mate on his Would You Like A Tour? outing and earliest high-profile supporter since her 2011 claim-to-fame mix tape sailing soul(s).

The after-hour presentations help during a shifty time in R&B, where “R” could mean “real” or “ratchet.” The 5’2” soulstress joined a crowded class of freshmen in 2014 including singers Tinashe, whose high-energy gigs resemble 2005 Rihanna circa “Pon De Replay,” and August Alsina, a street-bred thug whose struggles add bulk to his notes. Still, Jhené’s Def Jam/ Artium debut Souled Out (released Sept. 9) reeled in 70,000 units its first week out while Tinashe’s Aquarius pushed 19,000 and Alsina’s Testimony rolled out 63,552. She even outsold veteran diva Mariah Carey’s latest LP, Me. I Am Mariah … The Elusive Chanteuse, which clocked in 58,000 units. But the numbers aren’t the story here. They’re just a byproduct. The story lies between her self-penned lyrics, which is what makes Jhené a stan magnet for females.

Jhené’s life experiences have provided her with mountains of material. It’s her power up among her peers. While her album hasn’t raked in six figures like Chris Brown or Trey Songz’s this year (X sold 146,000 and Trigga, 105,000 respectively), her hard experiences and single mom status can’t be manufactured. The 26-year-old mother of one has built a sticky fanbase by penning melodies on heartache, loss and weed. It’s a lethal combo for the millennial set, who flock to her catalog like a therapist on-call.

On “W.A.Y.S.”—an acronym for her late brother Miyagi’s favorite saying “Why aren’t you smiling?”—she sings, “I do this for my daughter/That’s why I keep going.” Jhené’s six-year-old child, Namiko Love, also appears on the other Kleenex magnet, “Promises.” This type of heart-clutching honesty has her cult following in their feelings. One Twitter user, named @QueenieKeiko, wrote, “There are times i wanted to give up but @JheneAiko said ‘you gotta keep going’ those words i take with me everyday.” Male Stans aren’t shy to cosign either, like @EpicLordEpicWin, who tweeted, “If the song with your daughter on it doesn’t touch somebody’s heart they’re dead inside.”

Then there was Kendra D. Dale who wanted Jhené’s words to be a permanent reminder. She tattooed “Why aren’t you smiling?” on her inner arm after losing her boyfriend in August and her father as a child. “I was in such a dark place at the time and tried to end my life on two different occasions,” she explains via email.

“I was in such a dark place at the time and tried to end my life on two different occasions. [Jhené’s] entire album have helped me a lot with the healing process.” —Kendra D. Dale on Jhene’s lyrics

Kendra says Jhené’s close-to-home narratives have become personal soundtracks for the tough times. “[Jhené’s] entire album have helped me a lot with the healing process,” she says. “She tells us everything through her music, without holding back, as if we are her close friends. A true connection is rare in artists these days. She is not in this for the fame, she just wants to tell us her stories and offer understanding to those who can relate.” 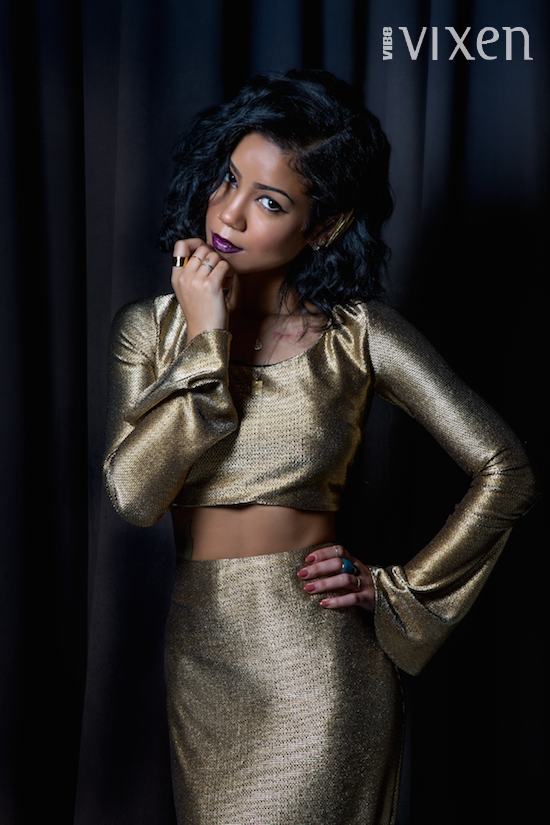 Growing up, Jhené was more baby Buddha than Little Rascal. With Tupac, Notorious B.I.G., Brandy and Lil’ Kim blaring in her household, the youngest of five used pens and notebooks as her playthings. A talent show rendition of 702’s “I Still Love You” sparked her career goals. “I just didn’t see myself doing what everyone else was doing as far as going to a regular school,” she says. At 13, Jhené signed with Epic/ The Ultimate Group (T.U.G.) Records and played B2K affiliate for three years before splitting from the music business to pursue her education. Her biggest lesson arrived in 2011, though, when she gave birth to her daughter.

Separated from her baby’s father, O’Ryan (singer Omarion’s brother), Jhené navigated single motherhood through song. On sailing soul(s), she meanders gently through the stress of making minimum wage (she was a vegan cafe waitress) while trying to provide for her daughter. “I can’t afford more problems/ I don’t have time to solve them,” she sings on “real now.” From losing her brother (“space jam”) to contemplating abortion (“you vs. them”), she was a damsel in distress with only her pen to save her. Her inner demons also crept into the buzzy EP Sail Out, like on the eerie outré “What A Life” and “Comfort Inn Ending,” a middle finger to a cheater who did her wrong. “My songs are just me and what I hear in my head,” she says. “[My fans are] connecting to it because they have those same thoughts that they’ve never really said out loud.”

“My songs are just me and what I hear in my head. [My fans are] connecting to it because they have those same thoughts that they’ve never really said out loud.” — Jhené Aiko

On wax, Jhené reveals more than a video vixen on Instagram. Calling out ex-lovers (see “The Worst,” “Lyin’ King” and “Remember”) not only draws prayer hand emojis from women reflecting on rocky relationships but provides a source of inspiration. “I’m in the habit of being poetic with how I feel so I just write about the person that did it or explain exactly the story that happened,” Jhené says. “While I’m going through it, I’m actually thinking how to be creative with it.”

While dirty cases of the ex remain dark fantasies, she comes clean about her platonic relationship with O’Ryan. Jhené admits she’s inked her feelings about Nami’s father for a record that may see light someday. “A lot of people think my songs are about him and they’re not,” she says. “When we had Nami, it was like we were already family. We weren’t together but we had always been friends. There are things we still have to work out but for the most part, I look at him and this is weird to say, but I literally look at him like a brother. It’s truly unconditional no matter who I meet. If I get married, he gets married, he has more kids, I have more kids, he will always be family.”

Complicated scenarios are easiest to tell for Jhené. As photomap searches show that Jhené has already found bae in hip-hop producer, Dot Da Genius (she confirmed she had a boyfriend on Hot97 in September), she recognizes her sulky records about past lovers or rough patches are what keeps her fans happy. “It resonates because for most people, it’s easy to connect to everything dark,” she says. “[It] always overshadows the light.” Trust, she’ll still cater to every color on the emotional spectrum regardless. “You don’t get as much of a strong reaction to a [happy] song [but] I feel like I’ll always have a balance of whatever you gravitate towards.”

Flip the page to check out more images from her cover shoot.