When a 2016 Allure video segment on beauty and aging with grace hit the internet, one of the three subjects immediately held the attention of the masses hostage. It was hard not to quickly fawn over the 60-something woman’s sleek, mature looks, palpable wisdom, gripping gaze, and grounded sense of self. Three years later, that same model, JoAni Johnson, continues to display her elegance for video campaigns, strut down the runways of the designer elite, and stare down cameras for high-stakes fashion photoshoots.

But JoAni Johnson the person barely even likes photos. The 5’4” model with more-salt-than-pepper hip-length tresses waves off compliments about her edgy portfolio. So far, she has photographed for Vogue, ELLE and Essence magazine shoots and campaigns like Pyer Moss, Ozwald Boateng, and most recently, the debut of Rihanna’s Fenty luxury line. However, for the Caribbean American woman—while born in Harlem, her family hails from St. Elizabeth, Jamaica—gratitude and humility run richly through her veins.

In fact, she considers herself to be a tea blender and specialist before the shinier profession that kicked off in her 60s. That, and a mother, which makes her role as a spokesperson for Vaseline’s #ListenToYourMoms campaign all the more fitting. “#ListenToYourMoms speaks to me because as a proud mom, continuing to keep traditions alive and passing it onto the next generation of beautiful and strong women in my family, is important,” Johnson said. “Throughout my life, my beauty regime has remained simple and the knowledge of the versatility coupled with the healing powers of Vaseline Jelly, has always been a trusted ‘go-to’ for generations of women in my own life.”

Her successful modeling career has admittedly been a whirlwind of excitement, nerves, glamour, risks, and stepping way outside of her comfort zone. However, above all her main goal is to stay present and take in each and every moment as it comes. While taking a break from overseeing a New York photoshoot, Johnson opened up about the art of living in the now, how beauty and self-care are intertwined, and all the lessons she’s learned from motherhood.

VIBE: You’ve been the face of so many notable campaigns this year, like Fenty and Pyer Moss. Would you describe your modeling journey as something that you’ve planned or more serendipitous?
JoAni Johnson: Totally serendipitous, I did not plan this. If you would’ve asked me two and a half years ago or told me that this would be my life, I would have told you are insane. It happened by chance. The universe has been very, very good to me and I’m just very grateful.

Enormous thanks and love to @Badgalriri (a true visionary!) and @LVMH for choosing me to be on the right side of history with you, as unapologetic fashion game-changers. Representation matters. It always has and this @Fenty campaign is so excellent and so important for multiple reasons in 2019. The marathon certainly continues. #DisruptAllFashionRules #greyhairdontcare #Fenty Shot by @_glen_luchford

In terms of the serendipitous journey to modeling, what was that opportunity that you seized and said, “This could be right, this could not be but let me take it?”
I didn’t even really think about it. I did not get involved in this of my own. My husband encouraged because I just didn’t think it was for me. I come from old-school [train of thought] that said you had to be a certain something in order to be successful. When he encouraged me to—it’s so funny, I’m not very fond of photographs of myself. It’s gotten a lot better in this new world but in the past with the limitations even in cameras, that industry has expanded. We’re getting much more quality photographers. Everything has changed and it’s all happening at once, so in the past I’ve never been very happy with photographs of myself.

How did you, looks of photos aside, to be in front of the camera takes a certain confidence just the presence of being there, how did you I guess?
Who’s confident? (Laughs) Whenever I do something, it’s about being in the moment. This is what the universe has presented me with, I am blessed. I am doing the best that I can in that moment. What is the artist, photographer, make-up artist, hair [stylist], what are they looking for? I am just the muse or the conduit. What is the designer looking for? I shared with someone earlier, I don’t look at the photographs, I’m not that person. It’s your vision, I am just here to carry out your vision.

What things have you learned about yourself in terms of personal style?
My idea of me is different than I am. I grew up in a world where I read Ebony fashion for the glamour in them, but on the real side I fight with myself because I will get things that are really glamorous but it’s hard for me to wear them because it attracts people’s attention. It’s not that I don’t care for it, but it’s hard. I’m me. I want people to know the human not the outside, the human. It’s more important because we’re all beautiful. We all have certain gifts that the universe has bestowed on us, it’s for us to find it and to share it. 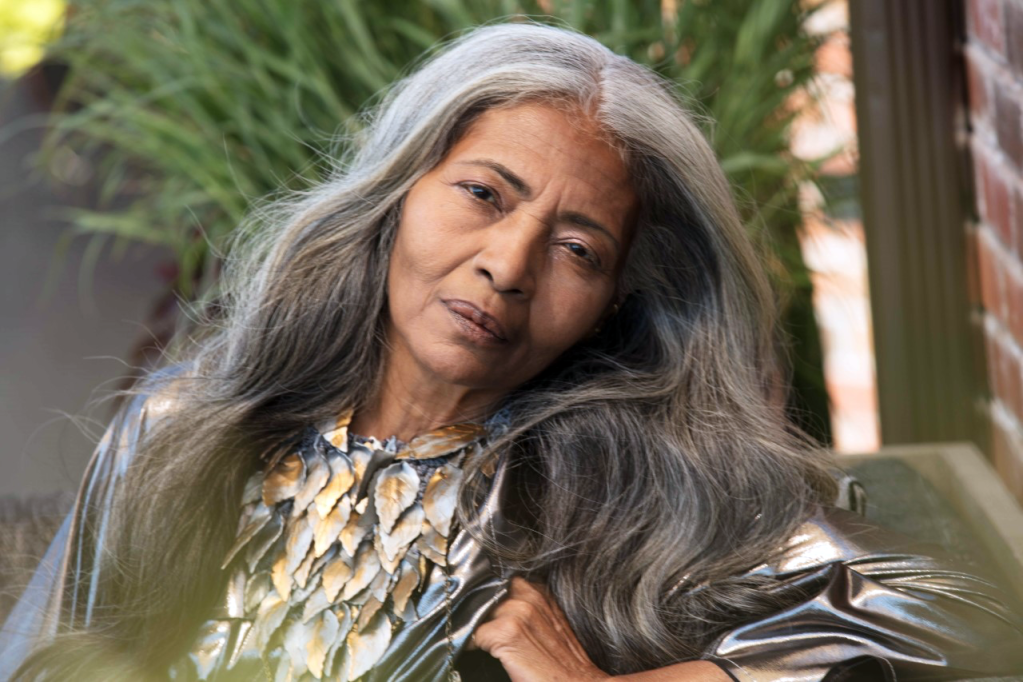 Let’s talk lineage and the things that we pass on to each other, whether it’s our friends, our families. What things have you taken from your mother figures that molded who you are, and that you would in turn pass to those who see you as a mother figure?
The biggest influences on me as a child were my grand aunts. They were hardworking beautiful women who had such a sense of style and I’m from Jamaican background, so there’s a certain expectation that you were taught. You would call it refinement or whatever but it was the English way, that’s where it came from. Good, bad or ugly, that’s where it emanated from and they were always very stylish. I watched them as my image of beauty and how they cared for themselves, whether it was using Vaseline on their skin or their nightly rituals of taking it off and washing and I was fascinated. It also showed me their doing it was an expression of their love for themselves and also a relaxation, like they were treating themselves. They worked so hard but it was their time with themselves that they chose to carve out because they didn’t have to do it. They carved out in their day to really reward themselves with the hard work that they had endured.

So then how do you carve time out for yourself? What is your relaxation look like?
I have passed that on to my daughters as well and my mother was also part of that because she learned from them. She taught me and then I passed it on. How do I do it now? I am a tea specialist, tea consultant, tea blender. Taking that time to sit down and make yourself a cup of tea takes time. Just taking that time, that special time for you to stop and just relax.

Whether I am doing a face mask—and I do a lot of them with tea as a base. I do that once a month with tea as a base and then use the Vaseline to moisturize. I love face massages and I can’t afford to pay for them. I have to do it myself and I think Tracee Ellis Ross was showing the [jade] roller that she used, I got one. The simplistic things in life, moisturizing my skin with Vaseline and then using the roller, that’s relaxing.

For me it’s what I owe myself because nobody is going to do it for me. We would like to think that we got it that way and you know people look at me in this role and think it’s so glamorous, and it is. There’s parts of it that are absolutely glamorous—when I get to wear a Prada suit, just to see the workmanship and admire the thought that they put into creating something like that and I get to put it on. There’s the other times when I’m not in that world, what am I doing to take care of me?

What do you learn from now your children? With Vaseline’s campaign, the idea is to listen to your mothers and your mother figures and take what they’ve put into your life, but what have you taken from them? It’s a two-way street, learning is both ways. What have you learned from your children?
My daughters teach me that no matter what we have a responsibility in this world that we’re in. I came up in the age of the late ‘60s/early ‘70s, there was a struggle there was I was in, there’s stories about that but you’ll read it in my memos. My girls have another journey and they teach me it’s got to be done daily.

My oldest and I were walking down the street and she’s got like this vision, peripheral vision and she sees this elderly woman—and I say elderly only because it’s a way to describe [her physically]—and she was waiting for the bus. She had packages and was trying to hail a cab and they wouldn’t stop. My daughter out of the corner of her eye saw it and she walks over to her and she says, do you need a cab? The woman said yes. I did not see that. Because I am in my life, I don’t have that. I wasn’t gifted with that kind of vision so she teaches me to be more observant with what is going on around.

When I was growing up, we closed off. I lived in a really tough neighborhood at the time and you just closed off. You just kept it moving from one space to another. My daughter is not like that and she has taught me to be more observant and to be more generous with showing the humane qualities.