Her age remains a mystery, but Laverne Cox is an open book when it comes to the naked truth about bullying, advocating and being transgender in Hollywood.

The success of an ensemble production depends largely on the tenacity and collaborative effort of each of its members — a seamless synergy that fuels its engine system and keeps it purring softly. If there’s any show on television that nails that formula, it’s Orange is the New Black.

Last summer, Netflix and Jenji Kohan introduced us to a gang of diverse and truly unforgettable women. On the surface they’re a group of incarcerated misfits, but after one episode, it’s clear that they’re stories aren’t simply intertwined, they’re tangled together like a stubborn knot. Enter Laverne Cox, otherwise known as the show’s cosmetic MacGuyver, Sophia Burset. Arrested and imprisoned after stealing money for her gender reassignment surgery, her mix of sass and class are the heart and soul of this already beloved series.

You’ve seen her on a host of other shows (Law and Order, HBO’s Bored to Death) including the hugely popular I Want to Work for Diddy, but it wasn’t until last summer’s OITNB summer premiere that fans really bonded with the Laverne they thought they knew. She’s got talent oozing from her pores, but the crux of her work lies in a tireless effort to advocate for the transgender community.

Born and raised in the dirty south, Laverne’s upbringing was far from pleasant as she and her twin brother fell victim to bullying on a daily basis. It wasn’t until she began the challenging transition process that the advocate came into her own and out to the world. No longer a victim of transphobia, Laverne’s confidence and vulnerability flawlessly translates to the small screen and everyday life.

Face beat, hair laid, and press-on nails in hand, it’s clear that this won’t be a typical celebrity sit-down. Theatrics and comedic one-liners aside, Cox isn’t afraid to flash some flesh and bare all.

How has the overnight success of Orange is the New Black changed your life?
My entire life is different. It’s been wild—people recognize me when I walk down the street, in bars and restaurants. It’s a good thing and I’m really excited. Right now I’m doing a college tour, speaking engagements, and the anti-bullying Spirits Day, which raises awareness against ending bullying against the LGBT community and different groups.

Are there plans for your own organization?
Not at this point, no – but that’s such a really good idea. At this point, I really want to listen and hear the community about what their needs are and what they’re experiencing. A lot of it for me is about staying connected to the community as much as possible. I have a platform and voice so I want to see what I can do.

What can you tell us about your worst experience with bullying?
When I grew up in Alabama, I was called a sissy, a fag and kids basically wanted to beat me up every day. There was a time in middle school when some kids hit my brother and I with drumsticks and a parent from the school saw it. We knew we could never tell our mother because she would blame us and question why we weren’t fighting back, but the principal called her. It was really awful and painful.

How supportive was your twin brother through the transitioning process?
He’s amazing. It’s never been an issue for him. He loves me and wants me to be happy. He gets it. He’s a musician with a beautiful voice and an absolutely wonderful performer. 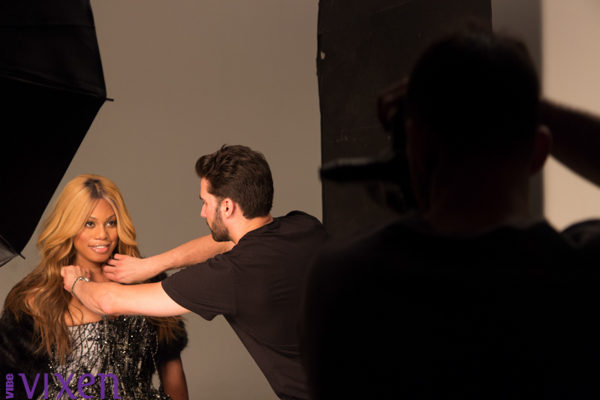 It looks like the role of Sophia was made for you.
I just auditioned! In August of 2012, I was at an event with my agent, who brought it my way. I was actually doing research on Cece McDonald, at the time. She’s a black trans-woman who’s in prison in Minnesota. I was trying to interview her for a show called In the Life, which lost its funding. Now I’m happy because I get to interview her. I think about her a lot during this journey. She was harassed walking down the street by people yelling anti-trans and racial slurs. A fight broke out and one of her tappers ended up dead, and she is in prison for it. I’m interviewing her for a documentary.

Oh, wow! What’s the documentary?
It’s going to be about violence against trans-women and Cici’s case is going to be a really big part of that. In a lot of ways, it’s a microcosm of what so many trans-women of color experience. We have the racist piece, the transphobic piece, and the criminal justice piece.

What do you think OITNB has done in terms of shedding light on the women’s prison system
It’s humanized a group of people who we are taught to think are disposable; people who don’t deserve basic human rights. In this show, we see these women are human beings with complicated stories. My hope is that the audience’s feelings for the characters on the show will translate to real women in prison.

Do you know if Sophia is based on an actual prison mate?
She is! Piper Kerman wrote a book where she mentioned a woman named Vanessa, who was Trans and a black woman. She was a showgirl before prison – she’s definitely a real person. 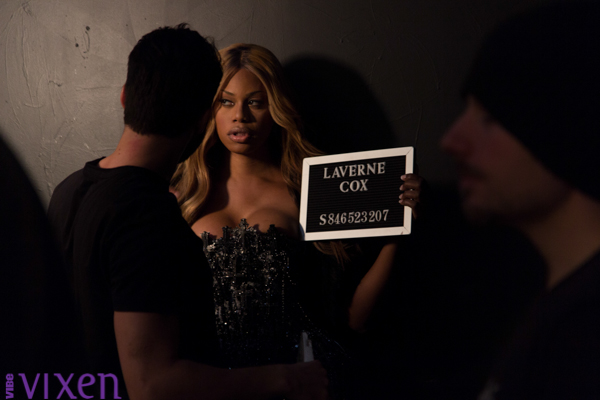 It’s obvious from the car ride here that you are a close knit cast. Was it like that from the beginning?
Yes. It’s a really great vibe on the set and I think it comes from the top. I’ve been on sets before where everyone had attitudes. Jenji isn’t having any of that. She and Lisa, our executive producer, set such a great tone. I’ve never seen a show with this many kinds of real women. This is revolutionary.

Does it make you hopeful for the future as a trans actress?
We knew this was different, because in our industry people only care about size zero white girls and straight white men. But our show’s popularity across the board is crazy. I’ve had all types of people from all walks of life come up to me and love the show, so I truly hope this begins to change the industry.

Was there any hesitation about doing a Netflix series?
I know that the world is changing, and I love Netflix so I didn’t have any hesitation. I was excited Jenji was involved because I love Weeds. It was about being involved in great writing and great directors. Netflix has changing the game in a big and tactful way. They are responding to the way most people are watching television now, so I had absolutely no reservations about it.

What are you watching on TV when you have the time?
I love Scandal. There’s actually a group on Twitter who are fans of OITNB and Scandal that call themselves Orange Gladiators. I live for that! Our fans are incredible, hardcore and amazing. I also live for Breaking Bad, Real Time with Bill Maher, and Fashion Police. I kind of watch a lot [laughs].

What is your personal style?
For me, it’s about being casual and comfortable. When I have an appearance or meeting, I turn up the glamour. But where I’m at now, I’ve been calling it a younger Michelle Obama. I wear a lot of BCBG and Anne Klein for my speaking engagements. Very professional, but add a little sexiness to it with a lot of minis and sheath dresses.

What would Sophia’s style be if she weren’t in prison?
Sofia has evolved. Now she’s a lot like her wife Crystal. She’s a mother so a lot of it’s about being easy and casual, but kind of chic and a little sexy. Comfortable sexy is Sophia in real life.

Speaking of your TV wife, the scenes between you and Tanya Wright are some of the best.
Tanya is a really good actress and every scene I shot with her is some of my favorite moments that I’ve ever had in acting.

Which is your favorite?
The scene with my wife, when she’s dressing me. There was something so magical about how it happened and what Crystal was doing. It was so sure, the love that these two women had for each other. And it was an active orgasm for me because for years I’ve trained to be able to do work that has that many layers of complexity, but it’s really simple at the same time. It was a moment where Crystal lost her husband and I had to realize that I probably won’t ever be the same again.

Who has your transition been the hardest on?
My mom had a weird adjustment period with it. A lot of it was just educating her. It took years to get her to use the right pronouns. Anytime there is surgery and hormones, it freaked her out a bit, but I wouldn’t say it was hard on her or anyone. Before I started the medications and surgical procedures, I didn’t have people in my life that would have a problem. For the people that know me, this wasn’t a weird thing. It wasn’t like this was out of the blue. They always knew who I was. I’m really the same person.

What would you like to see happen to Sophia in Season 2?
I would have Michael, my son, come visit me. I would really try to mend that relationship because she misses her family. At the end of Season 1, Crystal was into her pastor and I gave her permission to date him — I’d be curious to see if Sophia fully lets go of that relationship and finds love in prison.

Are you dating?
I’m not dating just one person. I’m not seeing anyone seriously, so I’m a single lady. When I have time, I go on dates.

What do you look for in a significant other?
I look for a guy who’s really smart, highly intelligent and really articulate. But he also has to make me laugh. I was dating this comic — we’re still sort of seeing each other on and off — and he’s really funny, really brilliant and beautiful. It’s a good combination; he’s just a bit shorter than me. Ideally, the guy has to be a really good person. I want his heart to be sweet, and he can’t be a liar. He has to mean what he says and say what he means, and has to have good follow through.