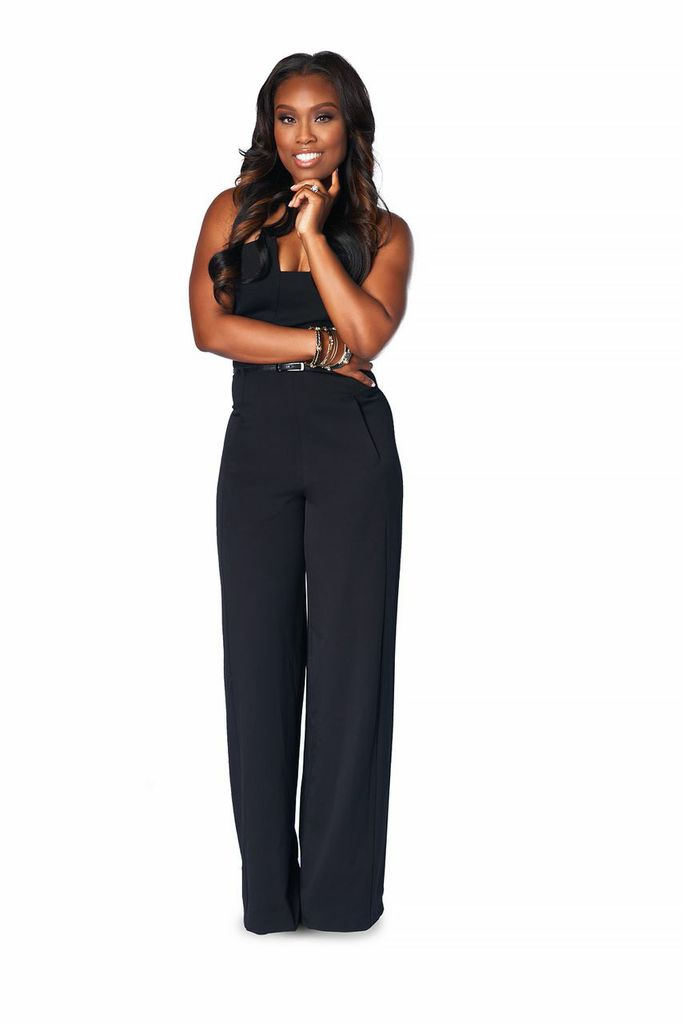 When 30-year-old NFL wife Michel Sproles found out she had breast cancer two years ago, it took her by surprise. Instead of letting her diagnosis bring her down, she educated herself, had a bilateral masectomy and continued being a strong wife and mother. Now the Compton native is using her story to inspire others and raise awareness about breast cancer among young women. She’s launching a campaign for “The Pink Line,” a high end hair line and division of the 7 Image Premium Indian Hair Line, which is sold out of her San Diego salon, 7 Image Salon.

Five to ten percent of the proceeds of that hair line will go towards making wigs and hair units for breast cancer patients and survivors affected by chemotherapy and as well as hosting free health fairs in underserved communities in Los Angeles. The fairs will consist of food, mammogram trucks, children’s activities, autograph booths and more. As a part of her efforts to raise awareness, a free health fair will be hosted in Los Angeles on July 19.

Sproles also has other young women supporting the cause including model Eva Marcille, stylist and former Love and Hip Hop reality star Emily B., Hollywood promoter Miss Diddy, R&B Divas Atlanta star Meelah Williams and singer RaVaughn. VIBE Vixen got to talk with Mrs. Sproles about her own battle with cancer and how she is using her experience to bump up the awareness.

So I hear you’re getting your Masters degree?

Yes. I’m going to University of San Diego and I’m getting a Masters in leadership studies.

What exactly does studying leadership studies comprise of?

A lot of people who go into higher education or have their own businesses or even enter non-profit get a leadership studies degree.

Does that tie into your campaign?

Not necessarily. I’m just a firm believer of finishing what I started. When I first met my husband back in 2007, I got accepted in a Masters program at University of Nevada, Las Vegas. I had got my classes and everything and ended up not going because him and I fell in love and then we got serious and then we moved to California from Vegas. So I’m actually going back to go get it so it’s something I have under my belt. I’m not necessarily tying it into this.

What’s your Bachelors in?

When will you be done with school?

I actually have another semester and a half. I would be done by now but I kind of made it like that. The way I do it is that I go every other spring and summer semester because during the fall semester I’m wherever my husband is playing. The last three years he’s been playing in New Orleans, so during the season I’m there with him. This upcoming season he’ll be in Philadelphia, so I’ll be here during the fall season but I usually go to school spring summer and take off for the fall. I’ll be done in a semester and a half.

Aside from the campaign, you’re a health care activist?

I am. This all kind of came about recently. In October of 2012, I was diagnosed with DCIS. It stands for Ductal Carcinoma in Situ. It’s a non-invasive non-life threatening form of breast cancer. Basically the doctors found cancer cells in my milk ducts so as a result I decided to undergo a very invasive type of surgery. Most people think I went a little bit too far but for me I wanted to secure my future for my children and my husband. I underwent a bilateral masectomy and removed both of my breasts after I learned of having DCIS. The tricky thing about DCIS is that they connect it to going on to being invasive cancer.

There’s like three different grades of DCIS. There’s a low grade, there’s intermediate grade and then there’s a high grade. I actually had areas of intermediate and high grade DCIS so with that being said it means that the likeliness of it going on to becoming invasive cancer are very likely. So for me and my peace of mind and to be able to sleep at night, I decided to undergo a bilateral vasectomy and just remove both of my breasts in their entirety. For some women, that’s doing a lot because they want to keep their breasts and they don’t wanna do something that drastic.  But for me I just thought it was better for me and for my family. Some women they just remove some of the areas of the DCIS and some women do nothing and they just watch it and go to the doctor every six months and I thought that was like nerve wrecking and I didn’t want to do something like that.

So undergoing the surgery gives you a smaller chance of it coming back?

In medicine they can never tell you there is a zero percent chance of something coming back, but for me, I have a less than a one percent chance that it will ever come back. For me, it’s pretty much obsolete and by the grace of God it will never ever come back and be an issue again.

Honestly I think a lot of it has to do with your mental state and how quickly you want to get back to normal life and doing normal things. For me, I was actually at my husband’s football game like two weeks later. I couldn’t really hold my daughter. At the time she was relatively young and I couldn’t hold her for at least two months. It was more like six to eight weeks where I couldn’t hold her. It was really hard but I got my full range of motion back almost three months after my surgery. I was able to lift my hands above my head and do some of the things I would normally do as far as exercising and things like that prior to my surgery.

How has your life changed?

After I had my surgery, I changed my diet drastically. I was eating like, nothing. I was losing weight and looking kind of crazy so I was like, well I don’t want to do that. I slowly started to incorporate some of the normal things, because after my surgery I wasn’t eating any meats. Everything I would eat was just super organic. I mean, basically like sticks right off the ground but maybe about three or four months after the surgery I started to incorporate meats and my normal diet routine. I’ve never really had a terrible diet. I cut back on a lot of sugar, caffeine, things like that I tried to cut out of my diet. But for the most part I’ve had a healthy diet so not much has changed.

Were you the first in your family to be diagnosed with breast cancer?

I was actually the first to be diagnosed with breast cancer in my family. It does not run in my family. In fact, I actually took a gene test. It’s called the BRCA gene test and it determines if you’re carrying a mutated gene that would mean that you’re likely to develop breast or ovarian cancer. I was actually negative for that gene which was a blessing because that means for my kids that I didn’t hand down the gene to my daughters. I have two daughters. So I was the first diagnosed and it doesn’t run in my family or anything like that so it was kind of one of those things that happen. I’m just grateful I caught it when it did.

Now about your campaign I see you have women like Eva Marcille participating. How did you pick who you wanted to participate?

This campaign is really targeted towards women under the age of 40, really between the ages of 20 and 35. I really wanted to choose younger women to be a part of this to appeal to that demographic and that audience. I just wanted to bring awareness to younger people. I think sometimes when you’re under the age of 30 you kind of think you are invincible. You think things are not gonna happen because you’re young and you have youth and you feel like nothing can happen. So I really wanted to appeal to that demographic and that audience and let them know that at 28 you can still develop a cancer, you know? It doesn’t really matter what age you are because from a lot of the studies I’ve researched and read, there’s women as young as the age of 17 that have been diagnosed with breast cancer. So I think regardless of age we should be looking out for this.

It seems like you have a lot going on with being a wife, mother, student and now health care activist. How do you balance everything?

I have a lot of support with my husband. I have a nanny, so my kids are taken care of when I’m not here. My mom, my sister, I have a lot of support, my grandmother. The people around me support me and help me balance everything, so when I’m unable to do something I can always delegate a task to someone else to kick in and pick up where I left off. For the most part, just keeping a tight schedule and making use of all the 24 hours in my day. I kind of space out everything, too. During the football season I’m not as busy because I don’t have school going on. So during the football season I try to do as much as I can do in regards to my businesses and things like that. Then in the off season we have different event in the summertime, but it’s not lasting the entire summer. When I’m in school I try to focus on school.

What businesses do you have?

I own a hair salon and it’s located in San Diego, CA. The Pink Line division is a division of my hairline that is already existing via my salon. So the Pink Line is just a division that I dedicated to… well a portion of those proceeds will go towards putting on these different health fairs and breast cancer awareness events and things of that nature.

Is there more than one location?

I have one physical location, however I just recently started doing a mobile division. So we service both San Diego and Los Angeles.

When did you open your hair salon?

Was the launch of the salon inspired by your bout with cancer?

That’s something that I kind of already wanted to do and was already in the works.

What’s in the future of you being a health care activist? Any other projects or campaigns that you will be working on?

I don’t have any other campaigns other than this one. I really want to give this 100 percent and get this one off of the ground and going before I take on any other tasks. I don’t want to put too many different things on my plate. In the future I’m just working towards raising money through this campaign and kind of keep it going every year and put on a health fair once a year in the summertime. My goal is to do it in the inner city communities, like the underserved communities like South Central. As it grows and gets bigger, and I hope that it will, then I will try to expand it to other communities and other states and then make it a nationwide type of thing, but that’s definitely far out.