The cats out of the bag (sort of) in regards to an Aaliyah biopic. As we shout, “it’s about time!” We’re still in the dark as to when it’ll be airing and who will be honing her signature look, or if this rumor is real. Ever since the R&B princess’ former manager posted the about  poster featuring the VH1 logo on Instagram last December, the rumor mill started churning. However after months of speculation it was Logan Browning’s good friend Tristan Mays to officiate the suspected rumors. Posting a juxtaposed picture of her and the late singer, she explained how “emotional, inspiring, and lengthy” the audition process was on her Instagram:

“Normally I wouldn’t do something like this. But a very close friend of mine, @loganlaurice, gave me the courage to speak up about something that’s been pending and sitting on my heart. Today, I can’t be upset that I didn’t book the role I worked so hard for. This may have been the most difficult, emotional, inspiring, and lengthy audition process I’ve ever experienced. Getting the chance to portray someone I’ve always loved and admired so much was a blessing every single step of the way. I invested every ounce of my body mind and soul into this process and I can honestly say I’m proud of myself. God definitely has something incredible in store for me. A huge thank you to everyone who believed in me and spoke up for me in the room. And a huge congratulations to everyone in the cast!#TheAaliyahStory. Like Logan said, you’re satisfied no matter the outcome of things that aren’t in your control. -Tristin Mays”

That’s where our detective scoop ends. With no official word from VH1 we just have to keep our fingers crossed and imaginations wondering if it’ll actually happen. With no word on who’s “One in a Million,” we have our own actress wish list for the role. If they ever put the casting powers in our hands, here’s who we’d give the role of the songstress gone too soon—flip the page to see who.

She’s already been rumored to be casted in the movies a few years ago and we see why. She has the talent to give off a great Aaliyah adaptation.

The upcoming actress could pass for Aaliyah’s younger sister. Their resemblance is scary how uncanny it is.

She can sing, dance, and is transparent enough to sell the image of Aaliyah although there’s no resemblance. She sold us on Chilli when everyone doubted her, we think she can do the same with Aaliyah.

The Guess Who actress has a weird similarity to the songstress’ look. We wouldn’t be mad if she landed the dream role.

The daughter to Lisa Bonet has the resume to give this role justice. She not only knows the work it takes to be in front of the camera but also behind so she’s go hard to portray her story right.

There’s already rumors that if there ever was one to be made, she’s be on top of the list and we agree.

If Taylour can land her first big role as a lead in a hit show, we have faith she can transform into Aaliyah.

The rapstress sold us on her recreated look of the late singer so we’d love to see how she transform reading a few lines from the film. 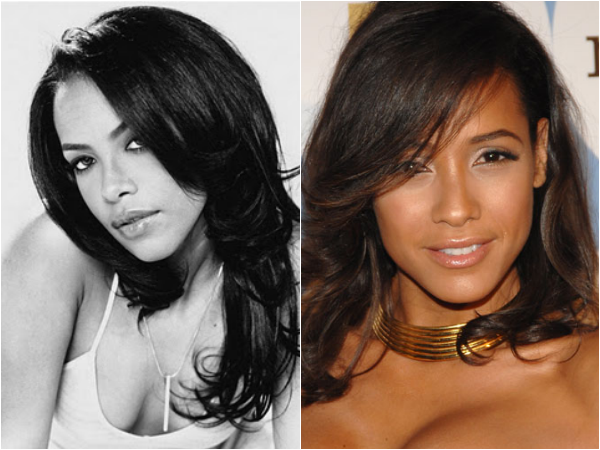 This Latina actress is a phenomenal actress and her versatility gives us hope that she would own her roles as a fictional Aaliyah.

We’re rooting for her career to take off and her landing the role of Aaliyah might do just that.

If Bria snagged anything from her father, we’re hoping its her acting chops. If she can snag this part, it may launch her long overdue career.

The actress, singer, and dancer has all the criteria’s need to play the role. All she needs is a little make up and we’d rock with her as a fictional Aaliyah.

She shared the screen with a-list actresses in For Colored Girls, we think she deserves her own lead role in The Aaliyah Story.

She has the pipes and acting chops to transform into the role of Aaliyah and make us believe her.

It’s time to see a new face, take over a ginormous role, we could see her honing up to her craft and selling Aaliyah’s story.

Sevyn can sing, dance, and mimic her mannerisms. Plus she gave us a snippet of her acting chops in her “nEXt” video and she wasn’t bad. A few more acting classes and we’d believe her as the songstress she already idols.