The face of feminism forever changed on June 6, 1998 when HBO introduced the world to Carrie Bradshaw, Samantha Jones, Charlotte York, and Miranda Hobbes– four friends on a quest for sex­­ (well mostly just Samantha) and love in the concrete jungle of New York.

Since its inception Sex & The City has become a championed cult classic, a true contender and mainstay in pop culture– influencing generations of females far and wide. Having been off the air for nearly a decade now there isn’t one girl that hasn’t compared her life an episode of SATC, hell even Jay-Z admitted in “Bonnie & Clyde” that Beyonce gets “Carrie-fever”.  For us ladies, these episodes are like commandments, a real handbook on the perils of life and love as the foursome tackles the oh-so-tough social realities of the first world like monogamy, being robbed in an alley for your new sling back Manolo’s, moving from Manhattan to Brooklyn, and having sex like a guy.

Continue clicking to check out  20 life lessons Sex & The City has taught us.

A girl who hasn’t dated a few idiots in her lifetime is a fool. Without those short-lived relationships you wouldn’t be able to spot Mr. Right. Basically, if you knew better you’d do better ladies.

Samantha always had a way with words. The sexually adventurous rebel of the group taught us that when it comes to a woman’s sexuality there are no rules. Like the great pop icon Madonna said, “Poor is the man whose pleasure depends on the permission of another.” 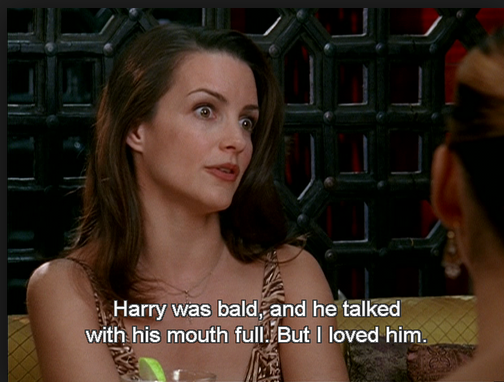 Even the most perfect woman on the Upper Eastside, Charlotte York, couldn’t find her prince charming.  Fast-forward through a few boyfriends and a failed marriage, and she tossed her high requirements of her ideal suitor like a bad habit.  Basically, there’s point in a female’s life where she understands that life is about sacrifices, and that sometimes means choosing personality over looks when it comes to dating. And there you have the short synopsis of how Charlotte York ditched her Episcopalian roots for Judaism, and became Mrs. Goldenblatt and taught us love comes in many shapes, sizes, and forms.

Sometimes we over-think. Ladies, it’s okay to think a guy actually is interested in you for more than sex.

As much as we feel like guys purposely screw us over with on-and-off again relationships, we are just as guilty. Flashback to a desperate Carrie Bradshaw running for her life after Big’s wife Natasha caught the two having an affair– touché. If the relationship is done then be done. If you continue to let him come back time and time again. It’s your life, make choices that you can comfortably live with.

Be selfish. After wasting the so-called best years of your life aka your 20’s on guys, you deserve some good ol’ me time.

Not all advice is good advice, even when its coming from your best gal pal.

To put it simply, sometimes a girl just needs a good screw. No relations, just one night. While we don’t necessarily condone making this a habit we do understand it’s a time and place for everything and a girl has got needs, just like Party Next Door crooned on his hit “Persian Rugs”, “Are we turning up or are we wasting time? Girl don’t waste my time. You know I’m Party, I don’t just want to chill with you.”

Sometimes keeping it too real can go left very quickly. Ladies, when all else fails keep calm and put on your best poker face. The goal is to keep him wondering not running for the exit after revealing you’ve got a few loose screws and lingering daddy issues dating back to the early 90’s.

As women we spend so much of our lives looking for the right guy that life passes us by. Be selfish for once and let the guy find you, don’t go searching for love. There’s nothing sexier than an independent, self-sufficient, and well established woman.

Eventually, all (well most) guys come to their senses and finally realize that you’re the one.  While it took Big nearly a decade to fully commit to Carrie we’re hoping love will come quicker than that for the rest of us, but time tells all.

We’ve all stalked our exes secretly before. Whether you’re interested in new-age social media trolling or the old school method of just pulling up on him and setting out camp in your car cheaters style every girl has done it. And to make matters worse, when he moves on before you the self-doubt will sink in but hold on ladies don’t let his rebound game it consume you.

The three most important in a woman’s vocabulary when it comes to a relationship are: I love you. There’s a science to it as childish as it seems but it’s true no girl wants to say it before the guy. After all, men are from Mars and women are from Venus.

When its over you just know deep down inside. And if you thought for a slight moment things could be fixed an awkward moment of silence solidifies everything.

Having a gay friend is necessary– they are the best accessory a girl could ask for. Who doesn’t love a guy that comprehends a girls 3 favorite C’s: clothes, compliments, and cocks?

Dating an older man is an experience every female should experience. It doesn’t mean you’re a gold digger, it means you’re tired of immature boys.

Being fabulous comes with a price tag of endless haters. If they don’t pay your bills they can have several seats.

For a fashionista like Carrie Bradshaw, style was in her DNA. While being well-dressed was in her genes, she thoroughly understood that shoes make the outfit. So ladies, make sure your shoes and handbags are top notch quality.

The battle of the exes is a real thing, no myth. When things are good, they are good but when sh*t hits the fan, we all secretly hope that our exes choke and die in the most sincerest way– especially when they move on with ease.