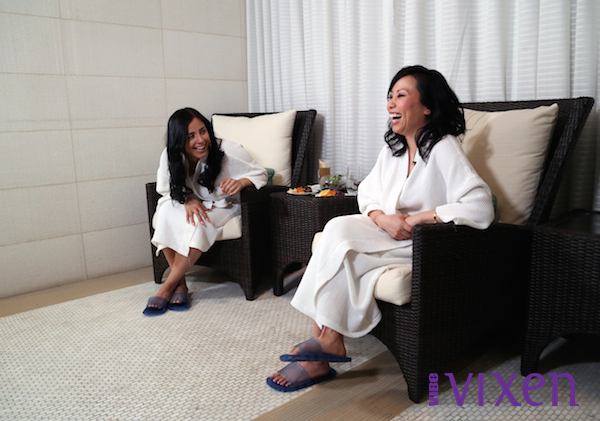 Before the internet ruled the world and reality shows were revered as primetime television, radio was your best accessory and Hot 97, home of hip hop and r&b, was the station. It’s as synonymous with the cultural history as VIBE’s glossy print; which is why it’s only right that our staff spent some girl time with two faces of the brand, Miss Info and Laura Stylez.

Miss Info is the station’s in-house news source. After being notarized through many publications, the pioneering blogger found her home with the station dedicating herself to keeping her fans up-to-date on entertainment news and keeping it real with celeb drama. Laura Stylez is the “rookie” of the station but she’s no newbie to the game.“I’m not a rookie because I’ve been doing this for x amount of years but I’ve only been at Hot 97 for three,” she said. Leading the morning pack with her rambunctious crew—Cipha Sounds, Peter Rosenberg, and Old Man Ebro—she’s the voice of reason and logic as she strongly keeps the female presence alive in the morning.

We caught up with two of the ladies that help hold the outlet down for a much needed spa day at the Spa at Langham Place in New York City. While the luxury establishment catered to them in a dimly lit room to calm any stress from their daily work schedule we got more aquaintanted to the ladies behind the mics.

Check out our Spahh Day with the two radio beauts as they talk This is Hot 97, Summer Jam and being a woman radio personality.

*We Vixen Verify Spa at Langham Place on 5th Avenue in New York City. The staff was very friendly and attentive. Vixens, head here for your next spa day! 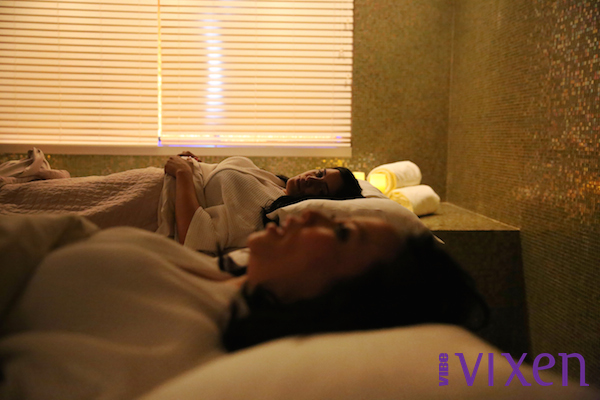 VIBE Vixen: Is This is Hot 97  a real reality show?

Laura Stylez: It’s not a reality show, it’s improv comedy so we’re making fun of reality shows to be honest with you. It’s like our version of The Office. This is Hot 97 is just like the inside world of what goes down behind the scenes, like in the kitchen and the hallways.

Miss Info: We’re doing unscripted comedy so we knew that that’s what was going to happen but it was a recreation of a real reaction to the idea of doing a TV show.  A lot of the story lines on the show are based in our own recollection with things that have happened. For example, with Mike Tyson calling Rosenberg gay, we’ve all gone through that same situation so we kind of pulled our memories together and it’s really something that we’ve experienced, even Angie, selling us candy every year. It’s something we dread.

So are your persona’s on the show your actual personas?

LS: I think we’re definitely more exaggerated version of ourselves. I am really like the rookie at Hot 97 because I’m the youngest one and I think I’m the last one to get hired. So even though I feel like I’m not a rookie because I’ve been doing this for x amount of years, I’ve only been at Hot 97 for three.

MI: I think that it might be a little exaggerated but we can all be really proud of the fact that we didn’t mislead our viewers about who we are, how we live and the way we interact with each other. We’re not faking it, so no one is playing a role. I’m not normally super obnoxious but I’m going to pretend that I am like this sweetheart on the show.  It’s ourselves but allowing us to be a little goofier.

Was it weird watching yourself on TV?

LS: You know what’s funny? Info refuses to watch any of her interviews. I watch myself a thousand times and say, “Man, I should’ve done this or I should’ve said this.”

MI: Even on the show I hate watching any of my own scenes. I’m overly critical.

So do you listen to yourself on the radio?

MI: Nope, not really. I mean I listen to stuff to make sure that it’s right and to kind of re-edit things, make something shorter or better but not because I just love the sound of my own voice, hell no. 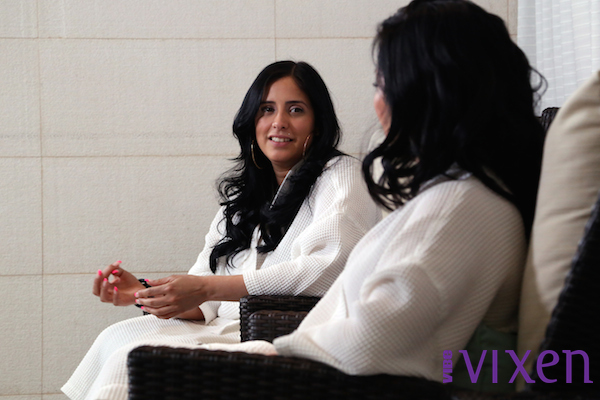 Is there a celeb that’s going to be on the show that you cant wait to see how it plays out on TV?

MI: I must say, and Laura was around during these scenes, Action Bronson may not be the most famous person that we’ve had as a celebrity cameo on the show but he is definitely one of the most hilarious. We put him in a very awkward scenario that has to do with online dating. After you see what he kind of does and how funny he is, you understand why he has his own web series now and he’s like going for TV, he’s incredible.

LS: I shot some really funny scenes with Rick Ross that are going to be really good. I was really impressed by his acting and improv skills. We kind of gave him a scenario and he totally went with it. I mean we shot a couple scenes so I don’t know what they are going to pick and choose but everything was pretty good.

MI: I thought that even Macklemoore nailed it. His facial expressions were so good.

Laura, how does it feel when they get on you for being the rookie?

LS: I don’t care. We go through this all the time; we always pick on each other. They pick on me about being a rookie and I’ll pick on his [Rosenberg] hairline or his weight. But we’re always bagging on each other all the time but those are like my obnoxious big brothers, all three of them.

MI: You know what’s also funny too with Laura? Yes, she may be the rookie on the morning show but they depend on her like she’s their mom. She has to schedule everything and make sure everybody is doing their job and just kind of like take care of them and that’s not usually the dynamic that a rookie has.

Oh okay. Miss Info, are you going to be joining the morning show?

LS: Ha! I wish that could happen everyday with me. Rosenberg and Cypha are in LA, so whenever one of them is out I always run and call Miss Info and beg her to come on the show and just sit there.

MI: [Looks to Laura] And what do I say? I’m always like, “ughhh.” I only dread it because you wake up at 4 a.m. but when I get there there’s no way to be tired because there’s so much energy in the room and we’re laughing and we’re getting really, really deep into serious topics and debates, the hours just fly by. So I appreciate whenever they call me for that even though I don’t like waking up early. 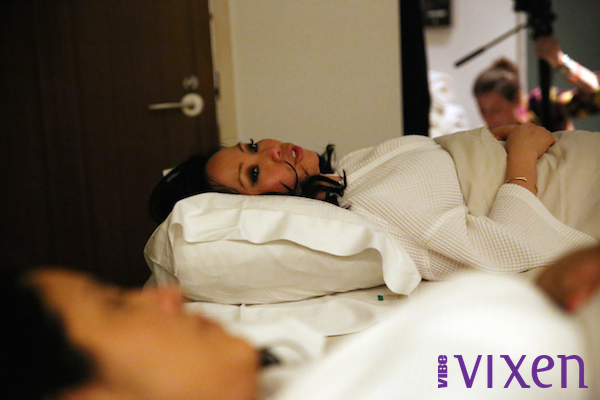 So with Summer Jam, how excited are you guys for this year?

LS: Dude, Summer Jam is going to be amazing! You know when we first announced our line-up we got a mixed reaction. Some people loved it some people were mad like, “No you’re missing this person. How are you not going to have X,Y, and Z?” Everyone has an opinion but people forget that Summer Jam is… the amount of surprises that are going to go down are ridiculous. I mean people that you would not expect. I’ve heard people talking and I can’t say anything but if what I hear is going to happen then it’s going [to be great]. Each year we try to outdo ourselves, and somehow, some way we always manage to put something amazing together.

MI: I always find it interesting that nowadays people are so intensely demanding of cameos and surprises. I remember going to T.I.’s concert at Highline [Ballroom] and all anybody cared about is whether Jay Z was going to come out or who they were going to bring out. Like yeah it would be great for Jay Z to come out and we’d all love that but he’s come out and supported T.I. many times before and by the way if you opened your eyes and weren’t just waiting for a guest to pop out you would notice he’s killing it right now. So I think the same thing with Summer Jam, we all want all of the surprise guests and we all want to speculate on who’s going to come out but it’s kind of bigger than the individuals who are booked for the show. It’s a huge event where people come dressed up in the craziest outfits, pre-game in the parking lot, and they go to the festival. They might hear somebody new that they really need to pay attention to who is going to blow up and be on the big stage the next year. It’s just a fun event that I don’t feel like anybody who actually attends ever says, “Oh, why didn’t they have so and so come out.” Nobody walks away like that.

Who are you most excited to see this year?

MI: I’m actually really excited about the festival stage. I think that it’s incredible that the festival stage is almost the alternative stage and I look forward to seeing what someone like Childish Gambino would do with the Summer Jam crowd.

LS: Also Jhene Aiko, Nipsey Hussle and Iggy Azelea. Iggy has such a huge fanbase and I just have never seen her live. At first I was a little skeptical of her music because I like her—I follow her on instagram and her style is awesome—but her music I wasn’t necessarily sold so I’m just curious to see what she is going to bring to that stage and how the fans are going to embrace her. 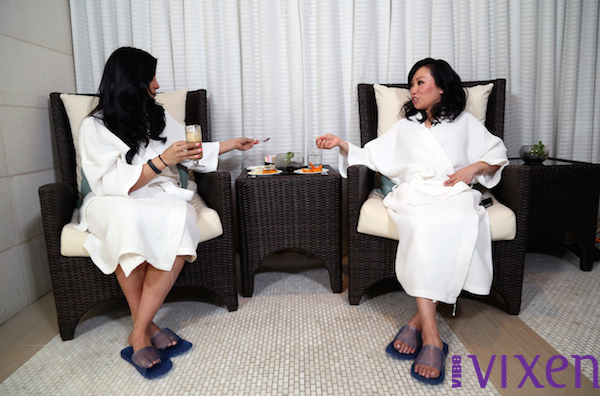 You ladies are the voice for women are radio, do you feel that you’re pioneers to women who want to be on radio because it still seems like it’s a more male dominated field?

MI: First things first, Angie is the voice of New York so we all kind of rent on her planet. I think what is great is that all over the planet there are really great women who are on the airwaves. I’m really proud to be an Asian-American on New York radio. I don’t think that I see a lot of my own fellow Asian-American women getting that chance, so I really appreciate that.

LS: I actually agree with that because I’m Guatemalan and so many people email me or tweet me about it. To be honest I don’t think there is any other Guatemalan woman and that means a lot to us.

MI: It also isn’t the only definition of either one of us so I think that on one hand you want to be proud of the fact that your Guatemalan or Korean woman and you’re on the radio, but we also hold ourselves to the same standard as all the men as well. So it’s not good enough to just be a dope Korean-American on the radio, you have to be dope on the radio.

LS: And all of us do have really amazing stories like Miss Info didn’t start from radio and she has so much knowledge, I learn from her all the time. You know what’s really cool about us is that as women we really hold each other down and Angie has no problem with pulling us to the side and saying, “You’re playing yourself, stop it.” We always want to empower ourselves and sometimes you don’t have that so personally I just think I’m looking to be in an amazing environment like Hot 97 where the women that are on there really hold things down.


Get weekly rundowns straight to your inbox