As captain of the Devils Girl–ficticious dance team to the Los Angeles Devils pro-basketball team–this brown-skinned dance queen makes newbie Ahsha‘s life a nightmare. In the first four episodes alone, Jelena fights to keep her dirty little secrets at bay and exposes Ahsha’s real father’s identity. Shaking up things is an understatement. “She know she deserves to be on top and she won’t let anyone get in her way,” Browning says of her mean girl role.

She originally auditioned for the role of the nice and naive new girl but was better at playing the arch enemy. But despite having to tap into her inner Hannibal Lector every time she steps on set, the real-life sweetheart enjoys her new foray into acting. “It’s fun to play this character because you have to tap into a different side of yourself to understand,” she says. “You can’t judge this type of person and then play them.”

VH1’s first scripted show ever is like nothing you’ve ever seen before, Logan promises. And we believe her. — Sharifa Daniels with additional reporting by Nicole Brown

VIBE Vixen: Tell us who Jelana really is and what attracted you to this role?
Logan Browning: Jelana appears to be the b-i-t-c-h of the show, and I can’t even front, she’s evil. She breaks all the rules and makes her own but that’s because she’s worked really hard for everything she’s gotten in her life. She is dating one of the players, Terrence Wall, and that stirs up a little controversy with the other people because Devil Girls and the actual players can’t date. It’s in your face but no one says anything about it.

Ha! Seems like everyone is scared of Jelena.
Definitely. That’s how she keeps control of them–perception and fear.

Have you ever played a bitchy character before?
When I was younger, I played a bully but that was about it. I never played someone so sinister and evil. I think of her as a sociopath because she’s smiling in your face while she’s stabbing you in the back.

Is it more exciting for you play a character like that as opposed to the nice girl?
I auditioned for Ahsha–the nice girl in the show–three times. I guess they don’t see me as sweet because I didn’t book that role.

How did you connect to this character?
I hate to say part of it came from myself but she did. When people see this show, I don’t want them to think that’s who I am. Everyone has a little bit of Jelena in them. Our creator gave me the note of two people, Hannibal Lector and Joan Collins from Dynasty. 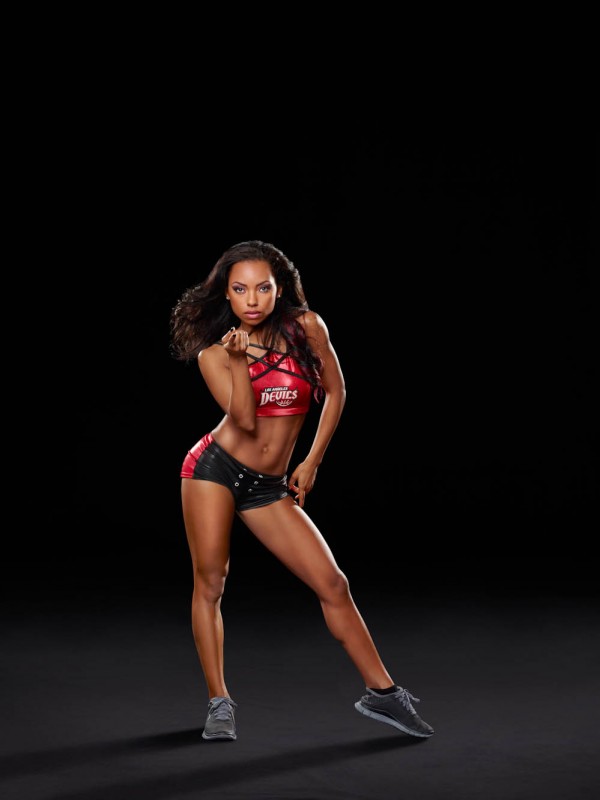 There’s a variety of vets on set, including Kimberly Elise and Dean Cain. What other actor or actresses would you like to work with?
I love Scandal and I’m such a big fan but Kerry Washington. I’m impressed with how she’s grown as an actress in her career. Even before Save the Last Dance, you see how she’s evolved and that’s how I see myself. Really anyone I can learn from is someone I’d love to work with, including her.

Did you have any dance or cheerleading training before you got the part?
I’m not a dancer like the other girls in the show. Yeah, I did ballet when I was younger and I was a cheerleader in middle school but nothing as serious as this requires. After we shot the pilot, I had to train for the entire summer to do what we do, but I did it and I was able to dance in the rest of the episodes. So I hope everybody gives me a bit of a break.

They should. What classes did you take?
Because ballet is the root of all dance, I took a lot of ballet classes. I took a lot of jazz and I did do hip hop every now and then, but I didn’t want to do too much because our show isn’t mainly hip hop.

On top of the dancing, do you have workout routine as well?
I should but we don’t have time. I have one outside of work, but when we’re working, we’re so busy. I like high impact things. I like running, yoga, anything to get out the bad energy.

Three reasons why Vixens should watch Hit The Floor every week?
Because there are tons of amazing dance numbers that have music from current artists, music from oversees artists and dances that are set in places you won’t believe. Plus, we have really, really hot gentlemen in our show, and they may or may not have shirts on at all times. The number one reason: It’s a beautifully written show. The script is amazing, our cast is amazing and it’s one of those things that if you don’t jump on the bandwagon early you’er going to be really sad you missed out.