St. Louis has produced successful rappers since the Nelly and the St. Lunatics days. Their worldwide success has opened the doors for rapper Tiffany Foxx who promises to carry her torch to the finish line.

Music is in this femcee ‘s DNA. Tiffany discovered her love of music early while exploring the piano, clarinet, poetry—and now rapping. Throughout her seven year rapping career she’s been through two groups, management with Snoop Dogg and she even coined her unique sound as Street Couture.

Her look and sound is refreshing and she’s exactly what the game has been missing. Foxx’s plan isn’t to disappoint, but she promises she isn’t perfect and wants her audience take this music journey with her as she brings change to the game. Recently this goldie-locked diva has been promoting her mixtape Yellow Tape with cameos from Miley Cyrus and collaborations with hip-hop legend Lil’ Kim.

We got the chance to chat it up with the street rapper who’s hoping to put St. Louis back on the map while making a mark in this male dominated rap game.

Busta Rhymes Gets Added To 2022 Rock The Bells Festival Lineup

VIBE Vixen: Tell our readers a little bit about yourself.
Tiffany Foxx: My name is Tiffany Foxx, 2 x’s. I’ve been doing music all my life; whether it’s been playing the clarinet, piano or doing poetry. For the past seven years I’ve really been pursuing my rap career. I’m from St. Louis, so I’ve seen how Nelly was able to put poetry with harmony.

You’re planning on putting St. Louis back on the map?
Of course definitely, Nelly opened the door and I’m going to make sure I carry that torch.

How would you describe your sound?
The name of my sound is street couture. I can talk about anything; heartbreak, politics, having fun at the club, and I’m always going to incorporate fashion. But I’m really raw, you really don’t know what’s going to come out my mouth. I might say things I’m really not supposed to say and do things I’m really not supposed to do but I think that’s what makes a lot girls really connect to me, but it’s life.

Who are a few of your favorite designers?
Yves Saint Laurent, Diane Von Furstenberg, and Versace. My favorite jeans right now are Rag and Bone.

How did your collaboration with Miley Cyrus come about?
I did a video called “Jellybean” and I guess she saw it when it came out. Kim retweeted it and she’s in love with Kim so she was on twitter like “Kim I love your artist Tiffany Foxx” with all these little hearts and “I love Jelly bean.” I was recording with Nelly at the time and my manager knocked on the booth like come look at this twitter. From that point on we started tweeting back and forth and then we dm’d each other our information and we just started kicking it via telephone for a second. I asked her if she would be able to come to the video shoot. She said, “No I’m not going to be in town, but it would be cool if you could put my name in it.” Then on the set they were like come upstairs and Miley was there. I was like “Oh my god Hannah Montana is right here.” We’ve been cool ever since.

Are you releasing any more mixtapes or albums soon?
Yes I’m releasing “Goal Diggers” in late spring. It’s almost done and I could have [released it already] but I’m trying to really squeeze everything I can out of Yellow Tape because my fans have been asking for different singles.

Why did you choose the name ‘Goal Diggers’?
I have been making “Goal Diggers” very popular because I call my fan base that. It’s for anyone who dares to be different, pushes the envelope, takes risks, is used to rejection, but is still motivated. That’s pretty much been my story. I’ve just been going ham and my fans have been going ham about it too. 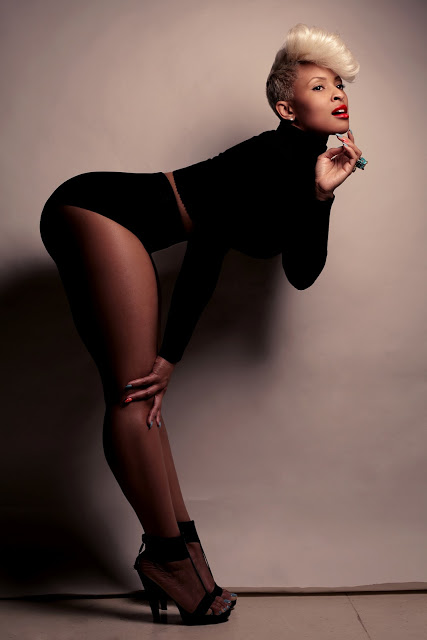 How did you and Lil Kim meet?
I heard through the grapevine that she was in St. Louis looking for a studio to record in. I found her the best studio, and even had a nice driver to chauffeur her around in a Maybach and chef to cook her nice food. She was just so down to earth and from that point on we kept in contact. Later on we were in Atlanta at her peoples house and they were playing my music. She came in and was like “Tiff this you” and she sat down and listened to the whole mixtape, it was Yellow Tape before it came out.  She got on a few of my tracks and from that point on we decided to make it official.

How is it working with Kim?
She’s such a perfectionist; she will do something over and over again. She has work ethic down to a science. She likes to work hard and please her fans.

What are you hoping to change about the game for females?
[I hope to change] the unnecessary beef, unnecessary cattiness, falling for the game, and the blueprint that they set for us. They don’t want us to win—it’s a male dominated genre of music. They want us to talk about  how cute and sexy we are. But even if you’re going to talk about that, throw some stuff in there. I want to bring unity to the game and connect with my audience in a real, raw, and urban way.

What can we expect from you for the rest of the year?
You’re going to hear a lot of Tiffany Foxx this year and the next thousand summers. I’m definitely here to stay, I’m no microwave artist, and I’m not a one hit wonder. But I’m not perfect, I have acrylic on my nails like everybody else, I have the 750 an ounce Russian weave in my head like every other boss girl that’s getting it. I have issues, my heart has been broke, and my daddy wasn’t there, all of that.