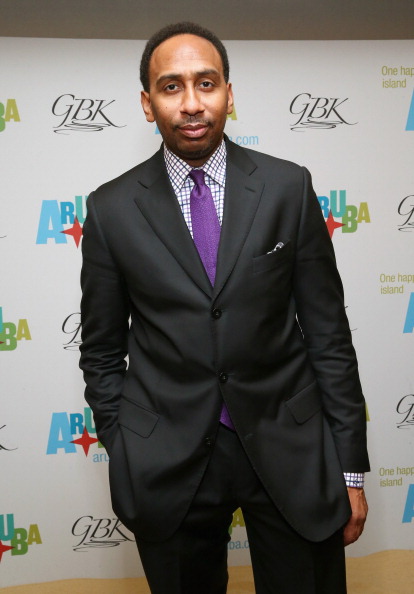 Sports analyst Stephen A. Smith was suspended from his ESPN gig yesterday because he said women need to learn how to not provoke domestic violence. Sorry guys, but he has a point.

Last week (July 25) during a discussion about NFL player Ray Rice’s two-game suspension over domestic violence charges on an episode of ESPN’s First Take, he said:

“We keep talking about the guys. We all know you have no business putting your hands on a woman,” he started. “You got some dudes that are just horrible and they’re going to do it anyway and there’s never an excuse to put your hands on a woman.  But what I’ve tried to employ to the female members of my family, some of who you all met and talked to and what have you, is that again, and this what, I’ve done this all my life, let’s make sure we don’t do anything to provoke wrong actions.” He continued, “I think in talking about what guys shouldn’t do, we also gotta make sure that you can do your part to do whatever you can do to try to make sure that it doesn’t happen.”

ESPN viewers saw a problem with this comment. I didn’t.

People do not want to face the fact that sometimes women do play a role in provoking domestic violence. They use the double standard to their advantage and put their hands on their boyfriends/husbands and do vindictive things because they know once they have pushed their male counterpart over the edge, those words “I will call the police if you hit me” or something to that effect will bring them down or notch—or at least they hope so. Brand Nubian said it best: punks jump up to get beat down.

My Queens, NY brethren received major backlash because he based his argument in the fact that women can provoke men—which is true—but it goes both ways. It’s not just about women provoking men. People provoke people. The sad thing is that it only becomes a topic of heated discussion when a woman is the victim. If a female athlete was involved in a domestic dispute regarding her husband or boyfriend and she was the aggressor, would her being suspended even be a question? If you saw a woman yoking up a man on the street would you laugh and record a Worldstar worthy clip or would you help? (For the answer to that question, click here).

The double standard that this 11th commandment of “If you are a man, thou shall not hit a woman”  is embedded in disregards the fact that regardless of sex you are, we all have emotions and tempers. If a woman is angry and feels the need to stab or hit her spouse, how is he supposed to feel? Who wouldn’t get upset and feel the need to retaliate if someone is trying to take their head off? When it comes to domestic violence, people forget that men are human, too. For example, if there was no security in that elevator with Solange and Jay Z and she would have had her way with him, would he have been wrong to push or slap her? Society says yes. I say no.

Whoopi Goldberg recently agreed with Smith saying women should stop assuming that they can be violent against men and that they won’t retaliate out of fear of societal backlash.

“If you make the choice as a woman who’s 4 foot 3 and you decide to hit a guy who’s 6 feet tall and you’re the last thing he wants to deal with that day and he hits you back, you cannot be surprised!” The View host said.

Bottom line: no one should put their hands on anybody. If you do, you cannot assume that that person will not retaliate because of their or your sex. We all need to learn how to keep our hands to ourselves and walk away so these situations can be prevented in any way like Smith said. This whole discussion makes me wonder. Now that we have players like Michael Sam and Jason Collins in the league, if one of them is ever an aggressor in a domestic dispute will provocation be up for discussion? Safe to say, the conversation would not even be as heated because that good ol’ double standard would be at work.