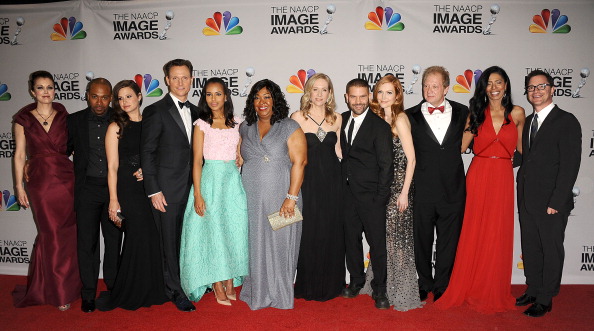 It’s Thursday so that means it’s time to suit up for Scandal. Shonda Rhimes found the perfect cast when she put these group of talented actors together. The on-screen chemistry they share has everyone either hating, loving, or wanting someone like them in their lives. Before this show many of these stars weren’t household names. Now that these names are synonymous to the show, lets take a look in their past to see where we may (or may not) remember them from. Flip the page to get better acquainted with your favorite primetime cast.

Ms. Rhimes is changing the face of Hollywood talent. Her accolades for successful series, is well past Scandal. Did you know that Grey’s Anatomy is also her show? Both shows air back-to-back, making Thursday’s night really Rhimes night. Once you soak that in you will also be intrigued to know Gilmore Girls, Everwood, Private Practice, The Good Wife, and Sorkin World are also Shonda’s doing.

She was first introduced as street-smart teen-mom in Save The Last Dance. Kerry went on to play tons of roles—many of which we love but what you may be surprised to learn that the quick and witty actress played a lesbian heading an in house sperm bank with her ex fiancé in Spike Lee’s She Hate Me.

It seems Fitz always had a scandalous side. Before he was creating a stir with because of his weakness for Olivia Pope in the hit series, he was a frienemy to Patrick Swayze in Ghost. He also lent his voice for Tarzan in the Disney movie.

The actor had women gushing all over him in his breakout film Stomp The Yard. Columbus needed no stunt double to get all his moves down pat because he was first a famed choreographer. The actor was head choreographer for Britney Spear’s Onyx Hotel Tour and also starred as a dancer in You Got Served.

Mellie is the wife we hate that we love. Before she landed big in Scandal she had small roles in other Rhimes productions but this first lady began her career on Broadway.

If Quinn is even her real name (joke), this is actually the actress’ first big hit. She’s been guest stars in countless TV shows—including a few of Shonda Rhimes other series—this was the first continuous role she’s landed.

This cyber wiz has a warm spot in our heart every time he shows up on the screen. But, do you remember when this B613 killer was a comedic pothead trying to get his friend out of jail by selling weed in Half Baked?

Cyrus Bean is probably the only person who comes close to out smarting Olivia Pope. Maybe that comes from his long run on Nash Bridges and starring role in Prison Break…

Jack always had a soft spot for being there when women are in need. While he is Olivia Pope’s escape from current reality, he used to play the go to guy for Felicity in the hit series. He also starred in Scream 3, The Goodwin Games, Grey’s Anatomy, and True Blood.

No matter how bad your father is, he’s probably better than Olivia Popes father. He wasn’t always this bad but he was quite the father figure and person of importance in his past acting bits. You may remember him as the father in The Inkwell and running for office in A Different World