Leave it up to Black Twitter to turn a negative situation into pure comedy. After an  employee over at Yahoo’s social media team fumbled a very simple tweet about President-elect Donald Trump’s aspirations to expand the Navy, users have created a full blown black-owned Navy sector.

Viola Davis Finally Gets Her Star On Hollywood Walk Of Fame

The hilarity began Thursday evening (Jan. 5) when Yahoo Finance shared a story on how it would cost $25 billion a year for the United States to meet Trump’s wishes to have a fleet of 350 ships in the military. But let’s be honest, you aren’t here for that. The tweet to support the story read, “Trump Wants a Much N***er Navy: Here’s How Much It’ll Cost.” Instead of what presumably would have been the word “bigger,” the racial term remained on the social platform for quite a long time in the Twittersphere (about 30 minutes) before it was taken down. 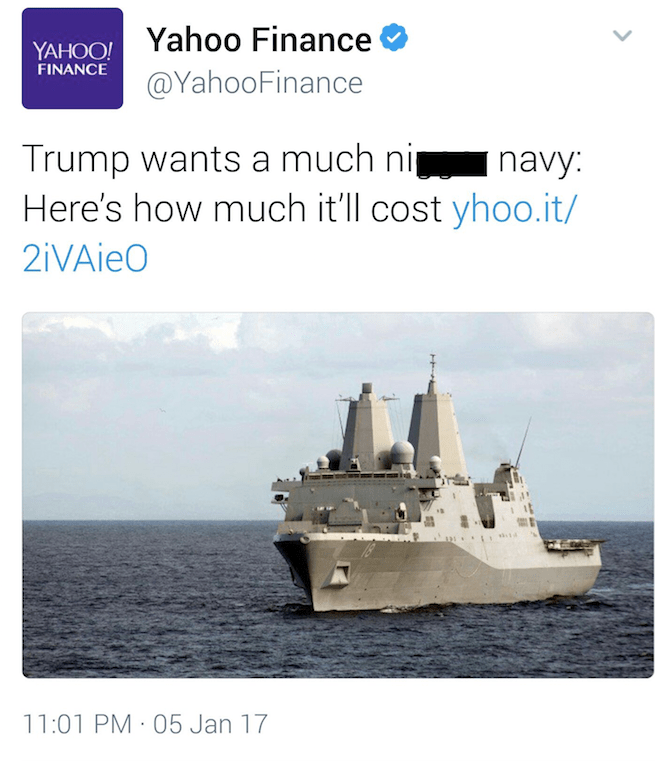 First of all, autocorrect is your bestie. There’s also the friendly reminder everyone in and out of higher education knows which is to double, triple and quadruple their work before exposing it to the eyes of public opinion. While the presence of “Trump” and the n-word in one sitting is just too damning to call a “typo,” we’re also reminded that “b” is next to “n” on the keyboard.

We deleted an earlier tweet due to a spelling error. We apologize for the mistake.

But of course, it was too late. As racist as it sounded, Black Twitter turned into an improv group and actually created a Black Navy with clever battleship names, playlists and more.

Check out some of the best tweets from the debacle above and add Yahoo Finance to the handful of those who have taken L’s just six days into 2017.