We were really fooled by… *drum-roll please* a hacker. The new found fued between former G.O.O.D. frontman, Chicago rapper Consequence and Pusha T, Q-Tip and Kanye West has made hip-hop headlines after the rapper fired diss songs to the Pusha T with “The Plagurist Society” and an open attack at, what it appears, at everyone with his The World is Watching 2 teaser, “The Puppet Masters“.

Well, according to Cons, he was hacked and those apologies Tweeted at Q-Tip, Pusha T, Kanye West and Jay-Z were indeed phony. The Tweets read: “So this is my formal apology to @QTipThe Abstract and @Pusha_T and @kanyewest and @S_C and all them ni***s. Runteldat.” The tweets continued with “I know my position but I guess I just wanted more. Some people are meant to be Jay-Z, others the janitor.”

The hacker continued to make Cons look quite pitful as they added: “I’m losing followers left and right. I’ve resorted to commenting in blogs defending myself under aliases. I wish ya’ll would stop talking about my teeth, i get it, they’re big. C’mon. I did kill “Gone” though, don’t front. I hope my fans can forgive me. I hope I can salvage whats left of my career before its too late.”

Here’s what Cons had to say to defend himself: “WOW someone HACKED my Account?!?!? #NEWLOW. Picture me apologizing on Twitter… Yeah Right. I gotta get out my bed for this corny shit?!?!?!? Weak raps, weak moved, weak ni**as!”

Well, I guess we can expect the fire flame shots to continue coming. If you haven’t been following drama, listen to Pusha T respond to his Cons diss record, as well as Cons reply back to Pusha T’s comment.  –Shabazz 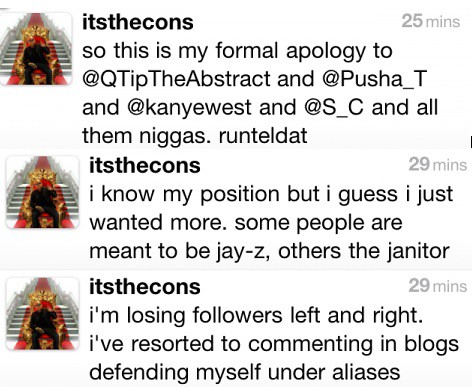