DaBaby finds himself at the center of controversy once again following a Twitter rant that was intended to be an apology to those offended by his unfavorable statements during a performance at 2021 Rolling Loud Miami on Sunday (July 25).

As VIBE reported, the “Bop” rapper used part of his set time to issue a disparaging message to people with STIs, HIV, and AIDS. He was also condemned for bringing out Tory Lanez, incidentally directly after Megan Thee Stallion’s set, despite the ongoing investigation and pending trial against the Canadian artist for shooting her last summer.

On Monday (July 26), the “Rockstar” rapper also held an Instagram live broadcast where he asserted none of his LGBTQ fans had HIV, AIDS, or STIs because they were not “nasty gay n**gas” or “junkies.” The video has been deleted from DaBaby’s Instagram page but was captured on TMZ.

The backlash against the Grammy-nominated artist has been swift and widespread with many calling his comments homophobic, misogynistic, and inherently false. As a result, DaBaby attempted to clarify his words by going on a bold Twitter diatribe on Tuesday (July 27) where he issued an apology for half of his statement, but doubled down on the rest. In four separate tweets, posted over a one-hour period, the 29-year-old rapper defended himself by saying his message was received incorrectly.

“I tell fans to put a cellphone light in the air y’all start a million man March,” he wrote in the first tweet. “I told you y’all digested that wrong. Man but I ain’t gone lie I’m impressed. Now show this same amount of support when a racist cop kill one of our black ass…YA NOT.”

The next tweet: “Anybody who done ever been effected by AIDS/HIV y’all got the right to be upset, what I said was insensitive even though I have no intentions on offending anybody. So my apologies [prayer hands emoji] But the LGBT community… I ain’t trippin on y’all, do you. y’all business is y’all business.”

Anybody who done ever been effected by AIDS/HIV y’all got the right to be upset, what I said was insensitive even though I have no intentions on offending anybody. So my apologies ??

“& for any brands, networks, or artists that like to profit off of black rappers influence on the culture, without understanding it or having the patience to deal with what comes with the position we play in our culture,” he shared in a third tweet. “Keep yo money next time us ‘N**GAS’ human too. #GodBless.”

& for any brands, networks, or artists that like to profit off of black rappers influence on the culture, without understanding it or having the patience to deal with what comes with the position we play in our culture.

Keep yo money next time
us “NIGGAS” human too.#GodBless

In his final tweet regarding the controversy, the North Carolina native wrote, “Other than that y’all cheer the f**k up & be proud of who you are cuz you can’t make me feel less of myself,” and promoted an upcoming show in Texas.

Although the intention of his Twitter thread was to clear the air, it caused more damage for the Baby On Baby artist. boohooMAN announced the rapper was dropped from his brand deal. The fast-fashion company shared a statement on Twitter regarding DaBaby’s future with the brand on Wednesday morning (July 28).

“boohooMAN condemn the use of homophobic language and confirm we will no longer be working with DaBaby,” said the statement. “Diversity and inclusion are part of the boohoo Groups DNA and we pride ourselves on representing the diverse customers we serve across the globe.”

It continued, “We stand by and support the LGBTQ+ community, and do not tolerate any hate speech or discrimination in any form.”

We stand by and support the LGBTQ+ community, and do not tolerate any hate speech or discrimination in any form.

As VIBE reported in June, the collaboration between DaBaby and boohooMAN included a limited-edition collection of summer clothing, featuring everything from leisurewear staples like track sets, jerseys, and T-shirts, to jackets, cardigans, sweaters, and basketball shorts.

Grammy award-winning pop star Dua Lipa also spoke out against DaBaby after fans pushed for her to remove him from the remix to her chart-topping record “Levitating.” The song peaked at No. 2 on Billboard’s Hot 100 chart in May and as of July 28, remained in the Top 10 at No. 3. The British singer took to Instagram stories to share her changed views on the rapper following his most recent behavior.

“I’m surprised and horrified at DaBaby’s comments,” she declared. “I really don’t recognise this as the person I worked with. I know my fans know where my heart lies and that I stand 100% with the LGBTQ community. We need to come together to fight the stigma and ignorance around HIV/AIDS.” 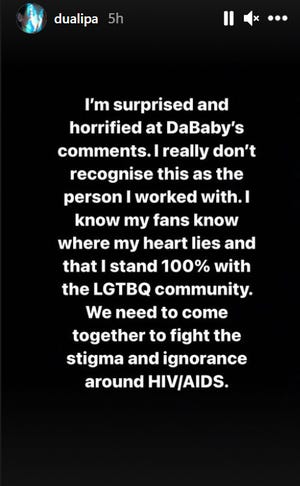 Rapper T.I. also chimed in, comparing DaBaby’s Rolling Loud orders to Lil Nas X’s proactive music videos in comments on The Shade Room, to which model Amber Rose spoke out against both rappers for their problematic commentary and questioned their own sexuality, commenting in part, “To be this homophobic feels like they are battling something internally [face with monocle emoji] This is not equality this is hatred. Period.”