DaBaby continues to face backlash for his controversial remarks as he uses social media to add fuel to the fire, burning career opportunities with each tweet.

Over the past week, the North Carolina rapper has made multiple statements regarding his comments made during his performance at Rolling Loud Miami. Questlove is one of the latest celebrities to speak out against the rapper for making homophobic remarks and false statements about HIV, AIDS, and STIs. The Roots drummer took to Instagram to share that his support of DaBaby’s career no longer exists.

As VIBE previously reported, DaBaby performed at the music festival and requested his audience put their cell phones in the air with qualifiers.

Previously, Questlove created a fictional lineup for a Summer Of Soul festival. He recently released a documentary about the 1969 Harlem Cultural Festival titled, Summer Of Soul, which earned over $1 million at the box office. The list of performers curated by Questlove included DaBaby, until Thursday (July 29) when he crossed the “Suge” rapper off his list due to his latest antics.

“I was hypothetically asked if I was curating an updated version of #SummerOfSoul who would be my acts? I gave my dream list,” he wrote on Instagram. “And now I’m updating my list ——because it’s 2021 & f**k the bulls**t. I’m especially not here for any savagery (if you’re lost: Google the idiocy of the crossed out). I’m not trine be all performative smurf & create a social flogging or start some click bait headlines. That’s missing the point. But right is right & his actions are wrong. Somebody Gotta say it: Homophobia/Transphobia/Xenophobia/Misogyny/Racism——this should go w/o saying is morally wrong.”

The 50-year-old musician continued, “& not that fake hiding behind religion holier than thou morally wrong. But ‘that was fuc*ed up’ & wrong. I had to say something. Again I’m not doing this for ‘what do you want a cookie bro w your ‘love ye one another’ posts?——black people already have a code about publicly criticizing so I’ll admit i was slow to do this because I mean he don’t know me from Adam. So this will prolly get marked as ‘old hater’ territory. But man…..that s**t was not cool at all.”

Once the 29-year-old rapper became aware of the post, he responded on his own social media platform. He claimed to not know who Questlove is, despite performing with The Roots on The Tonight Show in 2019. He shared on his Instagram story, “i ain’t even tryna be funny when i say …. i do NOT KNOW WHO DIS N**GA IS DAWG [laughing cry emoji] [shrugging emoji] $ do not care bout loosing you as a fan my boy lol @questlove. You or any other n**ga who wanna play follow the leader. This superstar you was a fan of is STAND UP n**ga, Yeen never seen one of these huh? [laughing emoji].” 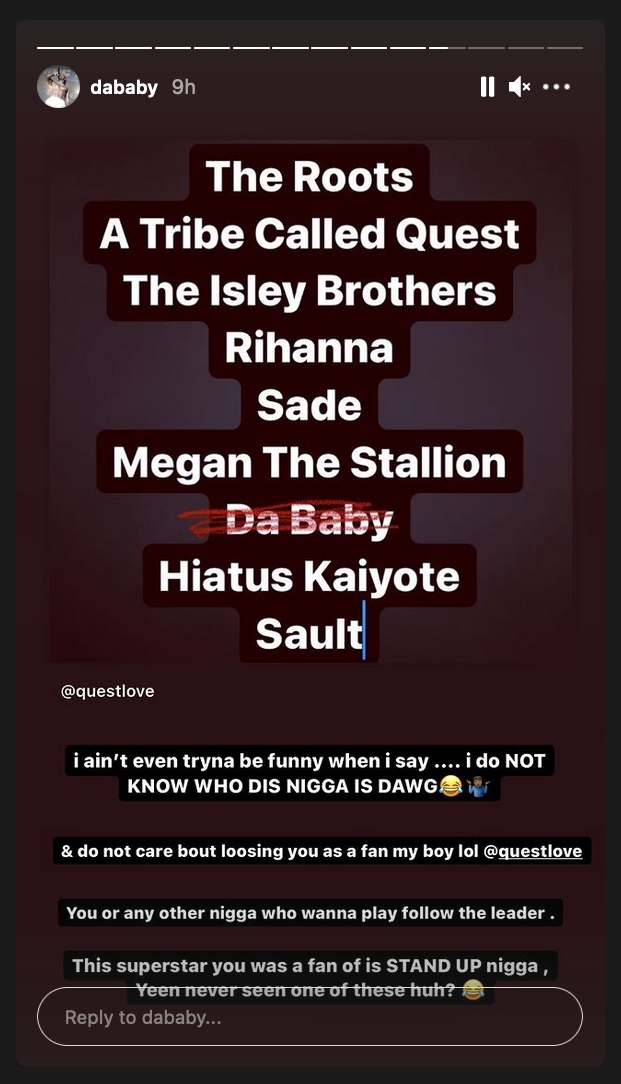 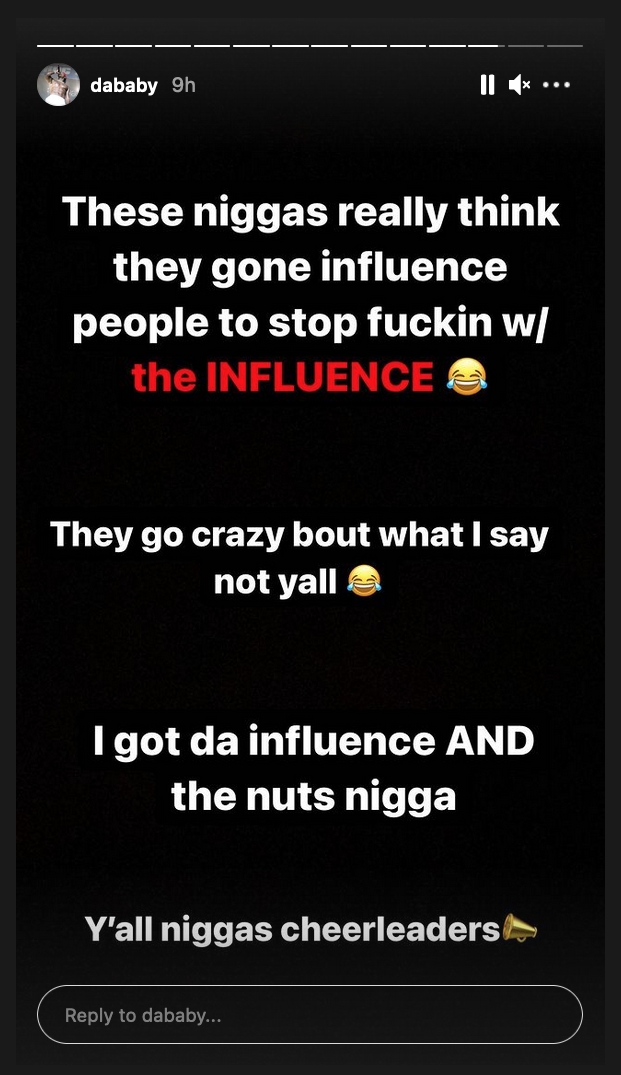 Questlove is not the first nor only celebrity to speak out against DaBaby. Despite finding support from T.I., Boosie Badazz, and recent collaborator Tory Lanez, VIBE reported DaBaby was condemned by Amber Rose, Chika, Dua Lipa, and Elton John among others. He was also dropped from representing fast-fashion company boohooMAN. This turning of tides continues as Madonna joined the list of artists to call out the rapper.

“A message to DaBaby – if you’re going to make hateful remarks to the LGBTQ+ community about HIV/AIDS then know your facts,” the 62-year-old pop legend wrote on Instagram. “I want to put my cellphone lighter up and pray for your ignorance, No one dies of AIDS in 2 or 3 weeks anymore. Thank God [prayer hands emoji]. And your sexist remarks about Ladies who’s p**sies need to smell like water only encourage more discrimination against women who fight daily against the oppression of living under the constraints of the Male Gaze.”

She continued, “People like you are the reason we are still living in a world divided by fear. All Human beings should be treated with dignity and respect regardless of race, gender, sexual preference or religious beliefs.”

The Baby On Baby rapper was also recently dropped from the lineup of a U.K. music festival. A flyer for the Parklife 2021 festival, set for September 11–12, shared in March featured DaBaby’s name on the top of the graphic. However, as of July 29, the flyer that appears on the Parklife website does not feature his name. VIBE has reached out to Parklife for a statement on the updated lineup of talent but has not heard back yet.