Destiny’s Child’s classic hit “Bills Bills Bills” made a huge return in 2021 according to TikTok’s 2021 Music Report. The annual analysis of music trends on the video-sharing app ranked the 1999 song the no. 1 comeback track of the year. “Comeback” tracks are classified by TikTok as trending songs released between 5 and 25 years ago.

“Bills Bills Bills” was initially released as the lead single from Destiny’s Child’s second album The Writings On The Wall. It debuted at no. 84 before on the Billboard Hot 100 chart before peaking at no.1 five weeks later, the group’s first song to reach this position. 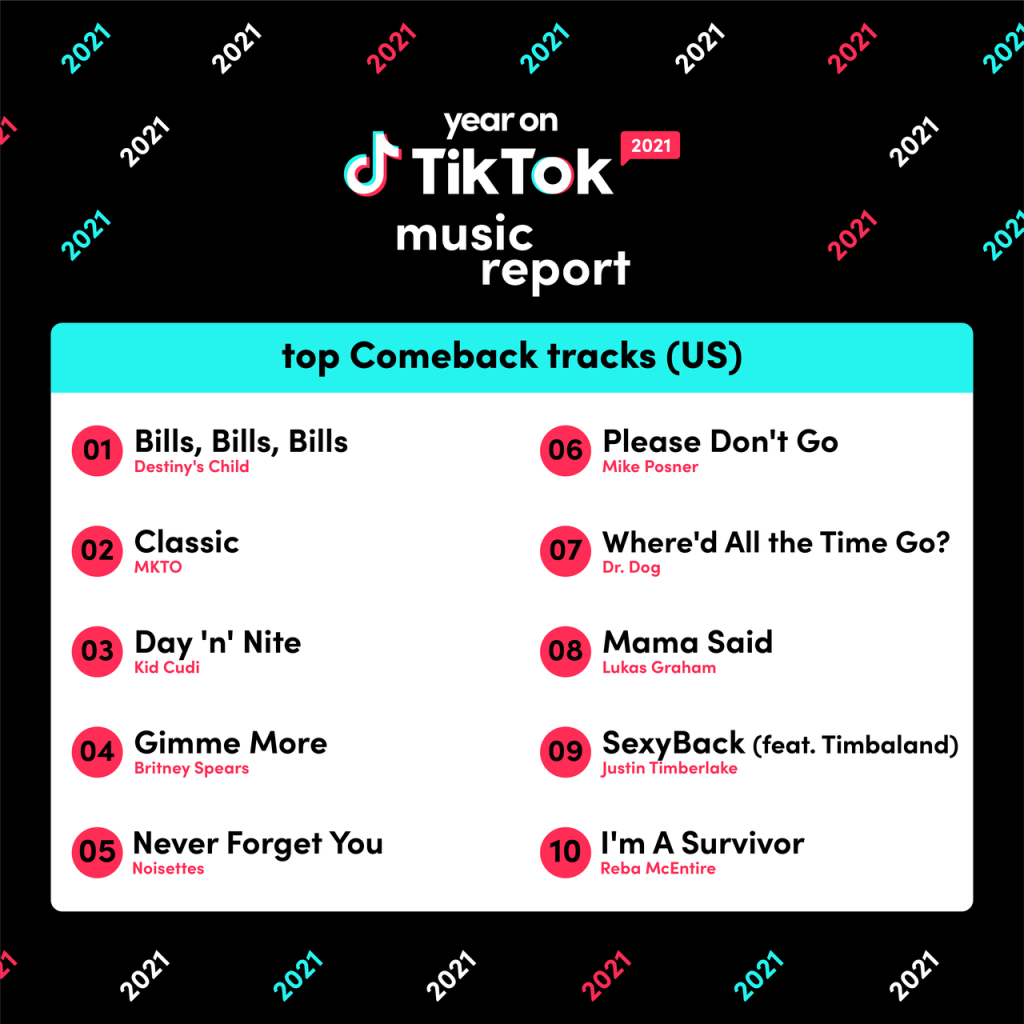 Women musicians dominated the U.S. Top Artist and Songs Lists on TikTok’s 2021 Music Report. In fact, according to TikTok, four out of the top five artists of 2021 by catalog creations were by Megan Thee Stallion, Doja Cat, Olivia Rodrigo, and Cardi B.  Five of the top ten hip-hop songs in the U.S. came from women, including Megan’s “Cognac Queen,” Cardi B’s “Up,”  Erica Banks’ “Buss It,” and Kayla Nicole’s “Bundles.”

Megan Thee Stallion and Doja Cat repeated their reign as the no. 1 and no. 2 ranked artists by catalog. Cardi B also made the list at no. 5. with Coi Leray at No. 10. 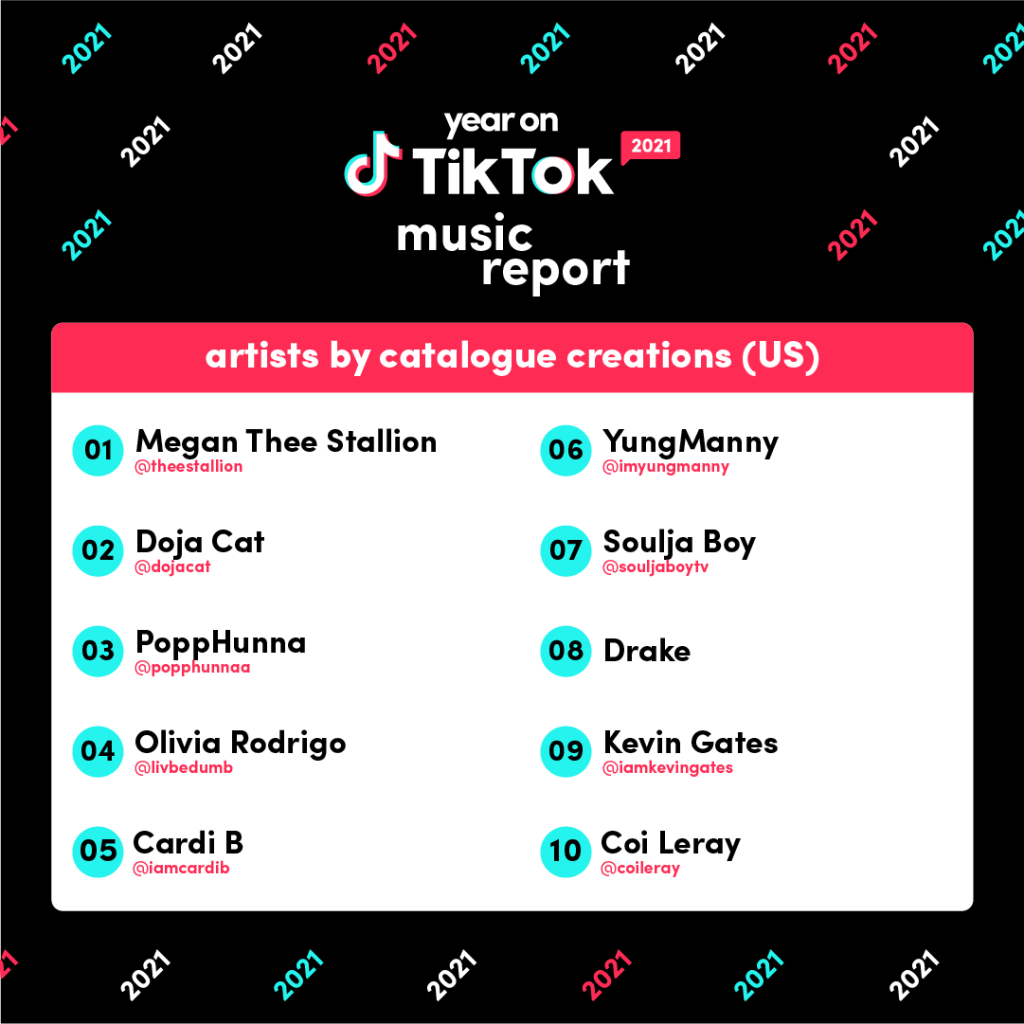 Hip-Hop in general dominated TikTok’s 2021 Music Report with rap stars taking half of the top ten spots on the ranking of the global songs. As for the top ten list specific to the genre, newcomers Popp Hunna, LPD Poody, and Kayla Nicole took the top three spots. The remaining top ten is rounded out by songs from Megan Thee Stallion, Coi Leray, Cardi B, Erica Banks, Playboi Carti, $ILKMONEY, and YungManny featuring Flo Milli and Sada Baby. Meanwhile, Young Nudy, Soulja Boy, Drake, all appear in the top 20. 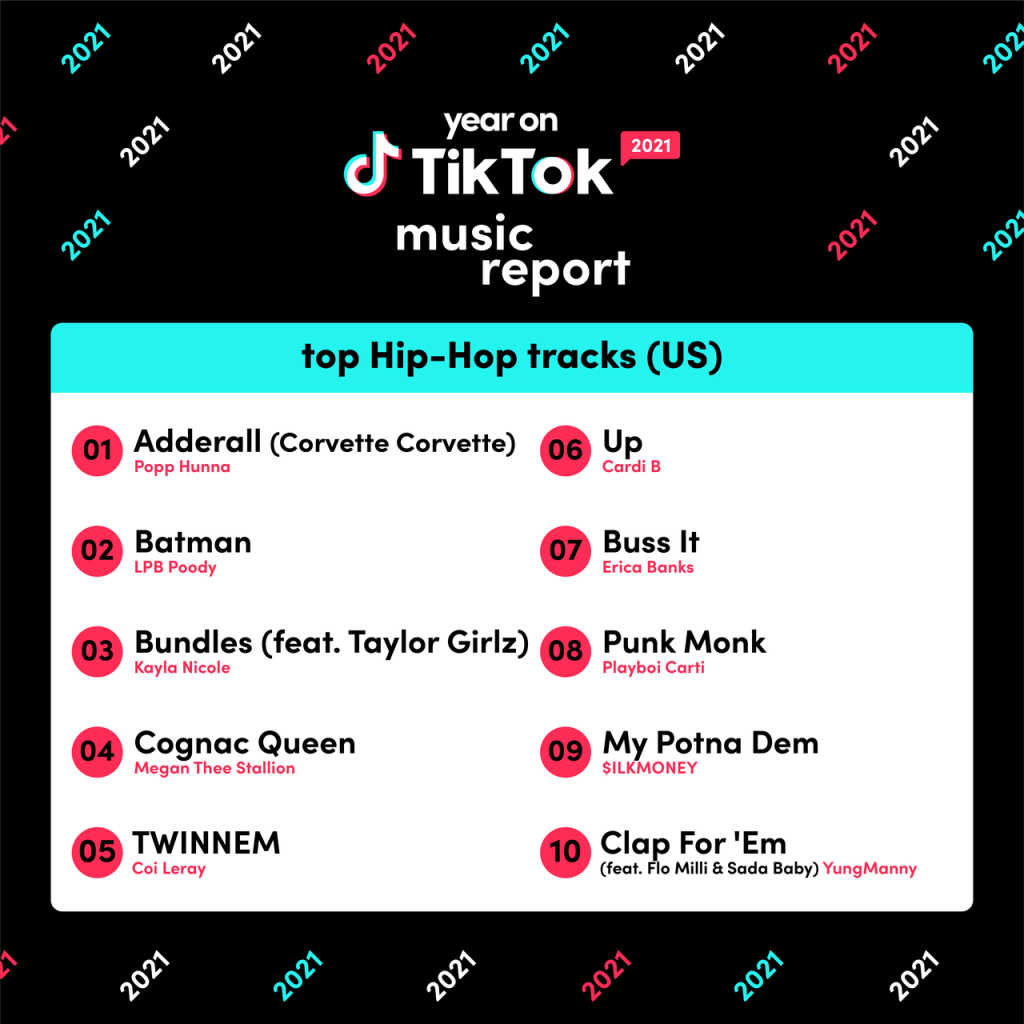 As social media continues to be a tool for music discovery and rediscovery, TikTok remains a digital destination for trending sounds and songs. According to the platform, approximately 430 songs surpassed 1 billion video views as TikTok sounds in 2021, and over 175 songs that trended on TikTok in 2021 charted on the Billboard Hot 100, twice as many as in 2020.

“TikTok opens the door to new artists, new sounds, underground and DIY scenes as well as the classic hits, connecting them with a global audience and passionate music community like never before,” said Ole Obermann, TikTok’s Global Head of Music. “2021 has been a huge year for music and for TikTok and we’ve been humbled how the industry and so many artists have partnered with us to make this magic happen across so many different countries.”